Sean Daniel. Category:American film producers. Kathleen Kennedy (film producer) On October 30, 2012, she became the president of Lucasfilm and the brand manager of the Star Wars franchise after The Walt Disney Company acquired the company for over $4 billion.[4] It was then announced that the first project under her authority would be Episode VII of the Star Wars saga (Star Wars: The Force Awakens) which is scheduled to be released on December 18, 2015. 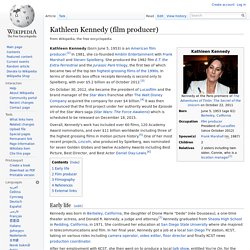 Kennedy was born in Berkeley, California, the daughter of Dione Marie "Dede" (née Dousseau), a one-time theater actress, and Donald R. Kennedy, a judge and attorney.[7] Kennedy graduated from Shasta High School in Redding, California, in 1971. She continued her education at San Diego State University where she majored in telecommunications and film. In her final year, Kennedy got a job at a local San Diego TV station, KCST, taking on various roles including camera operator, video editor, floor director and finally KCST news production coordinator. Kathleen Kennedy at the Internet Movie Database. Gary Kurtz. Early years in independent cinema[edit] Kurtz' film career was interrupted between 1966 and 1969, when he served in the U.S. 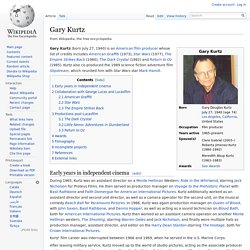 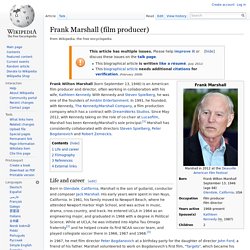 Marshall volunteered to work on Bogdanovich's first film, "Targets", which became his apprenticeship in film production, as he assumed various productions roles, even appearing in a bit part. Following graduation from UCLA, Marshall spent the next 2 years working in Aspen and Marina del Rey, as a waiter/guitar player at the "The Randy Tar," a steak and lobster restaurant. While traveling through Europe in March 1970, he received another call from Bogdanovich, offering him a position on The Last Picture Show. Rick McCallum. Richard "Rick" McCallum (born August 22, 1954) is a German-born American film producer. 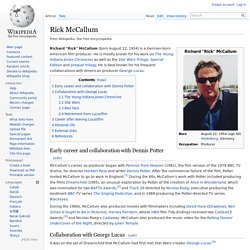 He is mostly known for his work on The Young Indiana Jones Chronicles as well as the Star Wars Trilogy: Special Edition and prequel trilogy. He is best known for his frequent collaborations with American producer George Lucas. Early career and collaboration with Dennis Potter[edit] Collaboration with George Lucas[edit] It was on the set of Dreamchild that McCallum had first met Star Wars creator George Lucas.[4] Ismail Merchant. Merchant succeeded as an independent producer in Hollywood for more than 40 years. 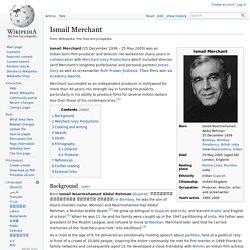 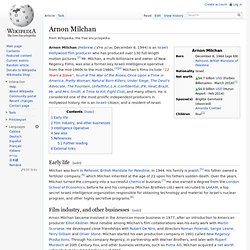 His family is Jewish.[5] His father owned a fertilizer company,[6] which Milchan inherited at the age of 21 upon his fathers sudden death. Over the years, Milchan turned the company into a successful chemical business.[7] He also earned a degree from the London School of Economics, before he and his company (Milchan Brothers Ltd.) were recruited to LAKAM, a top secret Israeli intelligence organization responsible for obtaining technology and material for Israel's nuclear program, and other highly secretive programs.[8] Walter Mirisch. Biography[edit] Early years[edit] A native of New York, Mirisch graduated from DeWitt Clinton High School and entered the movie business as a summer vacation usher in Jersey City's State Theater, soon moving up to higher positions at other theaters. 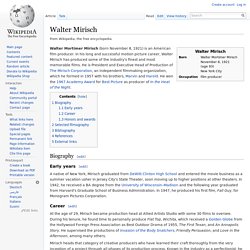 In 1942, he received a BA degree from the University of Wisconsin–Madison and the following year graduated from Harvard's Graduate School of Business Administration. Scott Mosier. Scott A. 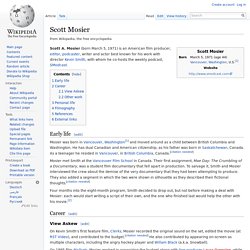 Robert Watts. Robert Watts (born 23 May 1938)[1] is a British film producer who is best known for his involvement with the Star Wars and Indiana Jones film series. 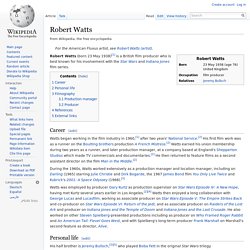 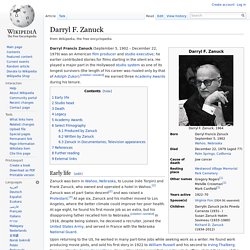 He played a major part in the Hollywood studio system as one of its longest survivors (the length of his career was rivaled only by that of Adolph Zukor). Scott Rudin. Albert R. Broccoli. Early life[edit] Albert R. "Cubby" Broccoli was born in the borough of Queens, New York City, the younger of two children of immigrants from the Calabria region of Italy, Giovanni Broccoli and Kristina Vence.[1] He acquired his nickname after his cousin, mobster Pat DiCicco, began calling him "Kabibble," eventually shortened to "Kubbie" and adopted by Broccoli as "Cubby. Harry Saltzman.

Herschel Saltzman (October 27, 1915 – September 28, 1994), better known as Harry Saltzman, was a Canadian theatre and film producer best known for his mega-gamble which resulted in his co-producing the James Bond film series with Albert R. Broccoli. Sam Spiegel. Sam Spiegel (November 11, 1901 – December 31, 1985) was an Austrian-born American independent film producer. He was the first to win the Academy Award for Best Picture three times, and the only one to be the sole producer on all three winning films.[1] §Early life[edit] Samuel P. Charles Gordon (producer) Andrew G. Vajna. Mario Kassar. Mario F. Kassar (Arabic: ماريو قصار‎; born October 10, 1951[1]) is a Lebanese film producer and industry executive whose projects are frequently in association with Andrew G.