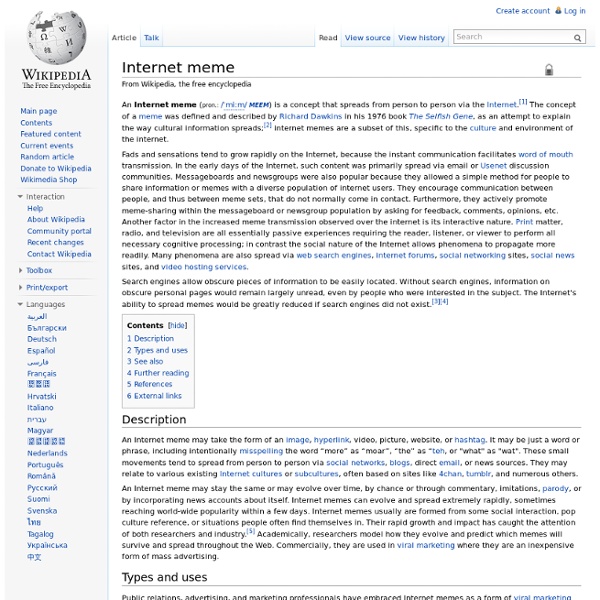 A meme is "an idea, behavior, or style that spreads from person to person within a culture".[3] An Internet meme may take the form of an image, hyperlink, video, picture, website, or hashtag. It may be just a word or phrase, including an intentional misspelling. These small movements tend to spread from person to person via social networks, blogs, direct email, or news sources. They may relate to various existing Internet cultures or subcultures, often created or spread on sites such as 4chan, Reddit and numerous others in our time, or by Usenet boards and other such early-internet communications facilities. The word "meme" was coined by Richard Dawkins in his 1976 book The Selfish Gene, as an attempt to explain the way cultural information spreads;[4] Internet memes are a subset of this general meme concept specific to the culture and environment of the Internet. History[edit] Evolution and propagation[edit] Marketing[edit] See also[edit] Further reading[edit] References[edit] Related:  Internet Culture

Category:Websites The main article for this category is Website. A website is a set of World Wide Web pages, usually written in HTML, that are viewed using a web browser. This category organizes articles relating to websites. Subcategories This category has the following 40 subcategories, out of 40 total. Pages in category "Websites" The following 145 pages are in this category, out of 145 total. Steve Jones: Nature, Nurture... or Neither? Bio Stephen Jones Professor Steve Jones is Emeritus Professor of Human Genetics at the University College London. He has written a number of popular books on genetics and evolution, including "The Language of the Genes", "Y: The Descent of Men" and "Darwin's island". Jones has won the Rhone-Poulenc book prize and the Yorkshire Post first book prize in 1994; and the BP Natural World Book Prize in 1999. In 2011, he was elected President of the UK Association for Science Education. To download this program become a Front Row member. ZOOM IN: Learn more with related books and additional materials. Encyclopædia Britannica Article natural selection Process that results in adaptation of an organism to its environment by means of selectively reproducing changes in its genotype. natural selection on britannica.com © 2010 Encyclopædia Britannica, Inc.

Is this the first ever direct evidence for human mirror neurons? Mirror neurons are one of the most hyped concepts in psychology and neurocience. V.S. Ramachandran famously wrote that they will 'do for psychology what DNA did for biology'. Mukamel's team seized the opportunity for single cell recording provided by the clinical investigations that were being carried out on patients with intractable epilepsy. Most of the 1177 cells that were recorded showed a response either to the execution of an action or the sight of that action, not both. Critics could argue that rather than having mirror properties, these cells were responding to a concept. Another potential criticism is that the execution-related activity of a postulated mirror neuron is triggered by the sight of one's own action, rather than by motor-output per se. Mirror neurons make functional sense in relation to empathy and imitative learning, but a drawback could be unwanted imitation and confusion regarding ownership over actions.

Illustration Created With Typed Letters Sometimes it’s hard to work through a serious case of writer’s block, when you’re clackity-clacking on the keyboard turns into a nerve wracking silence only a librarian could love. What is there to do while you’re sitting at your keyboard, or typewriter, waiting for your creative brain to start clicking again? Take a hint from artist Pablo Gamboa Santos (no relation) and start stringing those letters together into wordy works of art. Via DesignTAXI List of wikis This page contains a list of notable websites that use a wiki model. These websites will sometimes use different software in order to provide the best content management system for their users' needs, but they all share the same basic editing and viewing website model. §Table[edit] §See also[edit] §References[edit] §External links[edit]

Asemic writing Asemic writing from Marco Giovenale Asemic writing is a wordless open semantic form of writing. The word asemic means "having no specific semantic content". Styles of asemic writing[edit] An example of Zhang Xu's calligraphy Some asemic writing includes pictograms or ideograms, the meanings of which are sometimes, but not always, suggested by their shapes. Asemic writing has no verbal sense, though it may have clear textual sense. True asemic writing occurs when the creator of the asemic piece cannot read their own asemic writing. Newsletter from Mirtha Dermisache[3] Specialized publications[edit] The continuum from text, to asemic writing, to abstract images 2013 saw the release of An Anthology of Asemic Handwriting (Uitgeverij), which has over a hundred artists represented from many corners of the world.[14] Asemic writing has also received mention and space in The Last Vispo Anthology: Visual Poetry 1998-2008 (Fantagraphics, 2012). Influences and predecessors[edit] Gallery[edit] Notes[edit]

PopUrls PopUrls was acquired by Idealab in July 2010 for an undisclosed amount. In October 2014, PopUrls' original creator Thomas Marban launched its official successor called Popist.com See also[edit] References[edit] External links[edit] Rules of language Phonological[edit] Phonological rules describe the systematic relationship between sounds. They are responsible for determining what a symbol, or letter of the alphabet, sounds like. Semantic[edit] Semantics is the relationship between symbols and the things they refer to. Syntactic[edit] The word "syntax" means the study of the rules for the formation of grammatical sentences in a language.[3] Therefore, syntactic rules are those rules used in communication to describe how things are organized or ordered. Pragmatic[edit] Pragmatic rules are those rules used in social communication. Prosodic[edit] Idiosyncratic[edit] The idiosyncratic rules of communication tell what type of words and language are to be used when speaking with people. References[edit]

Lifestreaming History[edit] Lifestreams are also referred to as social activity streams or social streams. Lifestreamers[edit] Are the persons that are publishing their lives (e.g. On the web[edit] Social network aggregators adapt Freeman and Gelernter's original concept to address the vast flows of personal information and exchange created by social network services such as MySpace or Facebook ("Web companies large and small are embracing this stream" of providing lifestreaming.[3]) Other online applications have emerged to facilitate a user's lifestream. Lifestreams also represent a source of information about people's intents that can be mined.[4] Lifestream Websites[edit] Gather together all the information someone wants to display and order it in reverse-chronology. However, it is a clear distinction between the act of lifestreaming: the simplified sharing of one’s personal events and experience; and maintaining a lifestreams which involves commitment and technical skills: a site. See also[edit]

Music and Language by Chris Dobrian Table of Contents The Subjectivity of Experience Every input to our senses is a stimulus, available for us to interpret as information[1], and from which we can derive further information. For example, when we hear a lion's roar, our ear drum simply receives continuous changes in air pressure. When we hear a strange sound--thinking "What was that?"... The point of the above example is that the sound phenomenon which is external to our body--the fluctuation of air pressure--is considered an objective informational message, and everything that happens once it is converted by our "transducer" is subjective, based on our brain's understanding of the transducer's output, our own life experience, and our own favored ways of deriving knowledge. The subjective nature of perception was considered a truism by scientist/philosopher Gregory Bateson: There is no objective experience. Understanding language is...a matter of habits acquired in oneself and rightly assumed in others.[5]

Web Soup During the first two seasons, this show was taped in front of a green screen like The Soup. In the third season, the program taped on the set usually utilized by E! News with added studio audience seating. Regular segments[edit] Firsties – This segment shows the hottest viral videos trending every week. That's Un-Incredible! Skate or Almost Die - A showcase of skateboarding mishaps that has led to injuries. Operators Are Standing By – Poorly made local commercials and infomercials are featured here.[4][5] The products shown are then mocked or lampooned. Local News: Slowly Dying, But Still Funny – Embarrassing stories and moments from local newscasts are often aired. Please Please Please For The Love Of God Don't Try This at Home – Clips of people doing things like jumping off roofs and doing other things that get them unintentionally injured. Micro-Budget Masterworks - In this segment, clips of low-budget movies made by aspiring filmmakers are shown. Twittershots!! This Week In FAIL!