Greek Lemon Soup with Chicken and Orzo. When you first see the recipe for this soup, you may think it sounds weird. 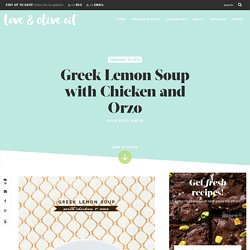 After all, egg yolks aren’t exactly a typical ingredient in soup. And let me assure you the resulting soup isn’t ‘eggy’ tasting at all. Rather, the acidic lemon cuts through the rich yolks and savory broth, making for a perfectly balanced, and perfectly creamy soup. It’s not a soup that cries out for a lot of stuff either. In fact, the watercress on top was just an afterthought here (we had some left over from a shoot earlier in the week), but I thought the radish-like spiciness was the perfect complement to the creamy yellow base. 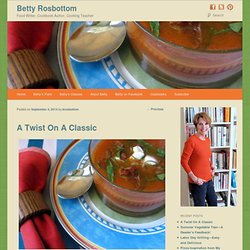 Heirlooms in myriad varieties, red, yellow and orange cherry and grape tomatoes, as well as field tomatoes (or what I call just plain old summer tomatoes) are having a heyday in western New England this summer. They started appearing in August and are still going strong—so strong that I have been using them creatively week after week in recipes like the simple BLT Soup featured here. After making countless BLT sandwiches, I decided to try the popular trio in a soup and loved the results. Nothing could have been easier. Crockpot Chicken Wild Rice Soup. Tex-Mex chicken and dumplings recipe. Is there a cuter word in the English language than dumpling? 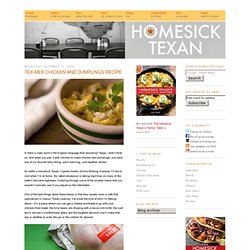 Nope, I didn’t think so. And when you pair it with chicken to make chicken and dumplings, you have one of my favorite belly-filling, spirit-warming, cold-weather dishes. As befits a homesick Texan, I spend chunks of time thinking of places I’d like to visit when I’m at home. My latest obsession is taking road trips on many of the state’s two-lane highways, motoring through some of the smaller towns that you wouldn’t normally see if you stayed on the interstates. One of the best things about these towns is that they usually have a café that specializes in classic Texan cooking. Oh, and of course, these cafés always serve chicken and dumplings.The first time I had chicken and dumplings was at my friend Laura’s house when I was in second grade.

As Laura’s mother dropped the balls of dough into the bubbling broth, she allowed us to throw a couple into the pot as well. Remove chicken from pot and turn off the heat. Turkey enchilada verde soup. Three weeks ago on a Friday, I found myself back in Texas so I could give my talk at the University of Texas at Arlington. 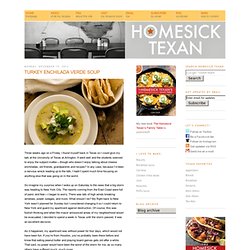 It went well and the students seemed to enjoy the subject matter—though who doesn’t enjoy talking about cheese enchiladas, old friends, grandparents and recipes? In any case, because I’d been a nervous wreck leading up to the talk, I hadn’t spent much time focusing on anything else that was going on in the world. So imagine my surprise when I woke up on Saturday to the news that a big storm was heading to New York City. The reports coming from the East Coast were full of panic and fear—I began to worry. There was talk of high winds breaking windows, power outages, and more. As it happened, my apartment was without power for four days, which would not have been fun. Lentil sausage cabbage soup.

For the month of February my friend Alanna at a Veggie Venture is focusing on soup, and it sounds like so much fun I'm going to join her a few times, either with new soups or recipes from the archives you might have missed out on.

Add a little vinegar to the soup at the end – fauxtudor

Here's to lots of great recipes for making delicious soup this month! 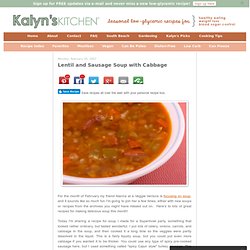 Today I'm sharing a recipe for soup I made for a Superbowl party, something that looked rather ordinary, but tasted wonderful. I put lots of celery, onions, carrots, and cabbage in the soup, and then cooked it a long time so the veggies were partly dissolved in the liquid. This is a fairly liquidy soup, but you could put even more cabbage if you wanted it to be thicker. You could use any type of spicy pre-cooked sausage here, but I used something called "spicy Cajun style" turkey sausage. Cut sausage in fourths lengthwise, and then into pieces. Cream of Fresh Tomato Soup Recipe : Ina Garten. Tomato Soup with White Beans and Bacon Recipe. We've used canned white beans here for their convenience. 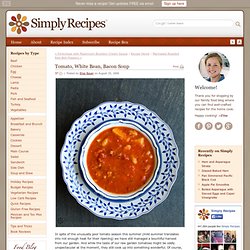 If you want you can take this soup up a notch and use dry beans that you've soaked overnight and cooked until soft. Ingredients 1/4 pound bacon, diced1 large onion, chopped2 cloves garlic, minced2 cups peeled, chopped potatoes (recommend Yukon Gold)6 cups peeled, chopped fresh tomatoes (or canned whole tomatoes with juice)*2 cups chicken broth1 Tbsp dark brown sugar1 15-ounce can white beans, drainedSalt and pepper to taste * To peel fresh tomatoes, cut a shallow cross on one end, blanch in boiling water for about 30 seconds, remove from boiling water and the peels should easily come off. Method 1 Cook bacon on medium heat in a large saucepan until lightly browned and fat is rendered. 2 Add the chopped onion to the pot, cook in the bacon fat on medium heat until soft. 3 Add the tomatoes and chicken broth. 4 Stir in the brown sugar. 5 Add bacon to the soup and the rest of the beans.