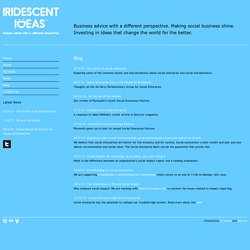 Theory-and-practice-paper.pdf. Stephen Lloyd obituary. The modernisation of the UK charity sector and the emergence of social enterprise as a powerful new force owe much to the skills and commitment of the lawyer Stephen Lloyd, who has died in a boating accident aged 63. 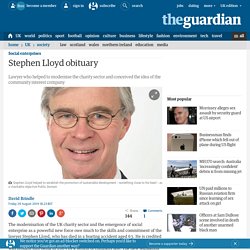 He is credited with having conceived the idea of the community interest company (CIC), which was brought into being in 2005 by a reform of company law. The new legislation meant that, for the first time, it was possible to establish a company that used its profits for the public good or, as Lloyd put it, "to achieve a marriage of private and business wealth with charitable purposes". In the past nine years, almost 10,000 CICs have been registered. Lloyd is said to have insisted with typical self-deprecation that he came up with the idea of the CIC while in a wine bar. A restless source of ideas, Lloyd came up with the notion of a low-cost insurer for not-for-profit organisations, part-owned by the sector itself. Business + Innovation. 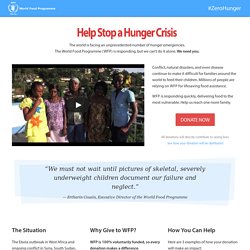 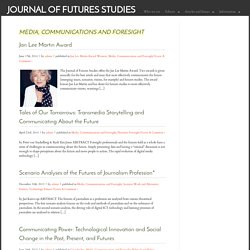 Two awards is given annually for the best article and essay that most effectively communicates the future (emerging issues, scenarios, visions, for example) and futures studies. The award honors Jan Lee Martin and her desire for futures studies to more effectively communicate visions, warnings […] Ashoka - Innovators for the Public. Skoll Foundation.

Investments Have Impacted Over 100 Million Lives. Our companies have improved the lives of more than 100 million people around the world, have created or supported tens of thousands of jobs providing income and skills training in the markets we serve, and are beginning to show what is possible in solving the world’s most intractable problems. 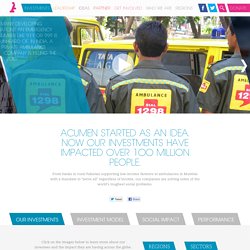 Every investment we make has the goal of creating outsized social impact. The headlines are too familiar: billions of people without access to clean drinking water, a safe place to live, high quality healthcare, or reliable and affordable electricity to enhance productivity. Billions. We bring patient capital to solve some of the world’s toughest problems head-on, and our most important scorecard is impact. Acumen’s metrics framework is designed to tackle difficult questions – how do we know whether the health clinic we have invested in is truly reaching the poor? MobileWorks. BlinkNow. Vera Solutions - Data Solutions for Social Change. Amicus. Juan David Aristizábal Ospina.

Juan David created an online platform so reporting on social change could be shared and, importantly, acted on. 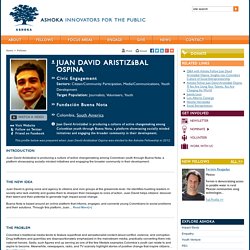 Colombian citizens need to see positive experiences of social change to be fully engaged citizens, and inspired to make change themselves. He has built Buena Nota into a notable impact catalyst for leading social projects and ventures, deepening their results and their social footprint. Buena Nota has involved a number of distinct social projects with national impact in its focused message and connecting key social projects and entrepreneurs with volunteers with needed skills who are committed to help. The core notion is to help identify and give voice to messages anchored in action. Juan David came up with the simple “VICA” method that he applies when collaborating with the social ventures. Global Poverty Project. Global Poverty Project advocates and campaigns to enable a global environment in which nonprofits, corporates, and multi-laterals can work most effectively together to achieve an end to extreme poverty. 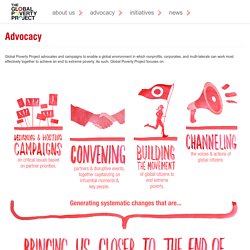 As such, Global Poverty Project focuses on: Our advocacy work is structured around our policy framework, and is enabled by our initiatives such as the Global Citizen platform and events such as the Global Citizen Festival. Over the past three years, our advocacy work has leveraged more than $16 billion and over 40 policy commitments from world leaders and corporations, which are set to affect the lives of up to 259 million people. The School for Social Entrepreneurs. Refugees welcome: inside Melbourne's social enterprise cafe boom.

Alhagie had always wanted to come to Australia. 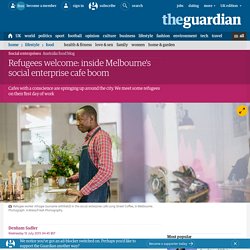 The 23-year-old Gambian national dreamed of the opportunities that were on offer here, and gained refugee status a year ago after he finished high school. He is now at university in Melbourne, but his biggest struggle has been finding a job to support himself. Pavithra, 26, came to Australia a year ago from Malaysia, and faced the same problem. 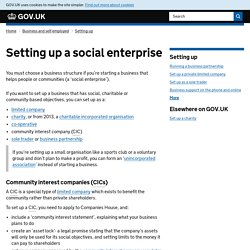 If you want to set up a business that has social, charitable or community-based objectives, you can set up as a: If you’re setting up a small organisation like a sports club or a voluntary group and don’t plan to make a profit, you can form an ‘unincorporated association’ instead of starting a business. Community interest companies (CICs) About social enterprise / About. 1. 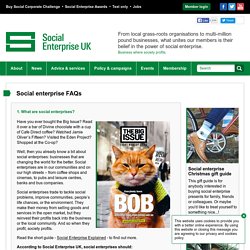 What are social enterprises? Have you ever bought the Big Issue?