Animal cognition. How I learned what I didn’t know I already knew about #Facebook from @HotLou by @LinkedInDiva. The question in the crowded room was “Why is Hot Lou called ‘Hot Lou’?” 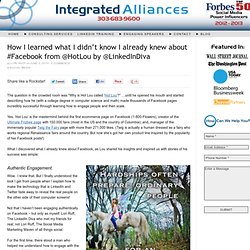 …until he opened his mouth and started describing how he (with a college degree in computer science and math) made thousands of Facebook pages incredibly successful through learning how to engage people and then scale. Yes, ‘Hot Lou’ is the mastermind behind the first ecommerce page on Facebook (1-800-Flowers); creator of the Ultimate Frizbee page with 150,000 fans (most in the US and the country of Columbia); and, manager of the immensely popular Twig the Fairy page with more than 271,000 likes. (Twig is actually a human dressed as a fairy who works regional Renaissance fairs around the country. But now she’s got her own product line inspired by the popularity of her Facebook posts!) What I discovered what I already knew about Facebook, as Lou shared his insights and inspired us with stories of his success was simple: Authentic Engagement. Save your Instagram photos to Dropbox by iphonemod. Popcorn Time Is Now On Android. Hollywood’s worst nightmare just went mobile. 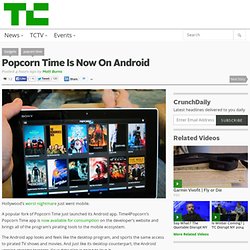 A popular fork of Popcorn Time just launched its Android app. Time4Popcorn’s Popcorn Time app is now available for consumption on the developer’s website and brings all of the program’s pirating tools to the mobile ecosystem. The Android app looks and feels like the desktop program, and sports the same access to pirated TV shows and movies. And just like its desktop counterpart, the Android version streams torrents.

Moju Is Instagram For Moments In Motion. As our phones become more camera than phone, it only makes sense that innovators would try to take on the very 20th-century concept of the “photograph.” 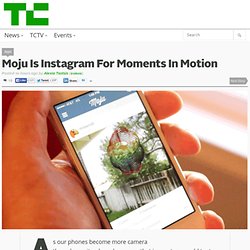 We’ve thus far seen a slew of apps using tech unique to our mobile devices, utilizing video and sound recording, sensors, GPS and the phone’s accelerometer to transform how users create and share images. Apps like Seene, Mindie, Frontback, Vine and even Instagram itself now compete to be your mobile go-to for what my co-editor Matthew Panzarino calls “vertical streams of cool, clever things.” Moju, an app that leverages the iPhone’s ability to capture a series of photos and user movements, is today adding its name to the game. It aspires to be a concise, hyperreal alternative to the pitfalls of video on mobile. Deborah Gordon: What ants teach us about the brain, cancer and the Internet. 1000 Life Hacks. Marco Tempest: Maybe the best robot demo ever.

This Glass Device Uses Honey Bees to Detect Cancer. 22 Astonishing Places That Are Hard to Believe Really Exist. 3 Ways to Revive Stale Bread. Three simple and easy ways to save your stale bread. 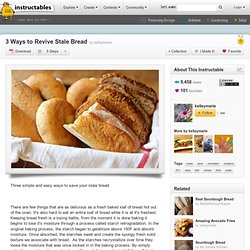 There are few things that are as delicious as a fresh baked loaf of bread hot out of the oven. It's also hard to eat an entire loaf of bread while it is at it's freshest. Keeping bread fresh is a losing battle, from the moment it is done baking it begins to lose it's moisture through a process called starch retrogradation. Tips & Downloads to assist you at Work & Home. Patatap. How your face changes in different lighting. WTF? Skype Quietly Removes “Offensive” Emoticons. The Screen That Doesn’t Scream. In a noisy room, trying to shout louder to make yourself heard just escalates the problem of being overwhelmed with sound. 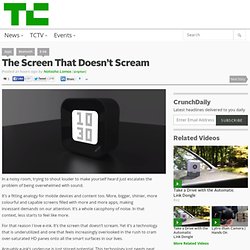 Sphero. James Patten: The best computer interface? Maybe ... your hands. 10 Best House Plants That Purify Indoor Air. Jeremy Kasdin: The flower-shaped starshade that might help us detect Earth-like planets. Scientists ‘freeze’ light for an entire minute. This Car Runs For 100 Years Without Refuelling – The Thorium Car. If your car was powered by thorium, you would never need to refuel it. 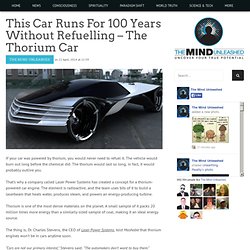 The vehicle would burn out long before the chemical did. This New Finding Explains Why Bees Are Disappearing. The secret is out – bees have been disappearing for almost a decade now, and scientists are scrambling to understand why. 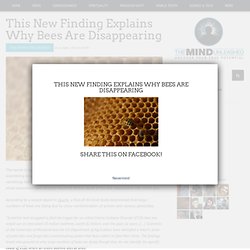 Some sources relay that the colonies all across the world are vanishing due to pesticides, electromagnetic frequencies, mites, and even GMO crops, but what researches have recently found to be the cause of the bee catastrophe will shock you. According to a recent report in Quartz, a first-of-its-kind study determined that large numbers of bees are dying due to cross-contamination of pollen and various pesticides. “Scientists had struggled to find the trigger for so-called Colony Collapse Disorder (CCD) that has wiped out an estimated 10 million beehives, worth $2 billion, over the past six years. […] Scientists at the University of Maryland and the US Department of Agriculture have identified a witch’s brew of pesticides and fungicides contaminating pollen that bees collect to feed their hives.

What does this study conclude? The authors summarized in their study: Charles Bukowski’s Top 10 Tips For Living A Kick-Ass Life. Looking for some pointers on how to live an awesome life? 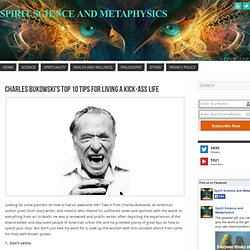 Take it from Charles Bukowski, an American author, poet, short story writer, and novelist who shared his unfiltered views and opinions with the world on everything from art to death. He was a renowned and prolific writer, often depicting the experiences of the downtrodden and depraved people of American urban life, and he provided plenty of great tips on how to spend your days. Apple Takes A Swing At Samsung In Full-Page Print Earth Day Ad. Apple has a new full-page ad appearing in some print newspapers today (via 9to5Mac), and it celebrates the company’s environmental record while simultaneously digging slyly at Samsung, its longtime rival and current opponent in court. 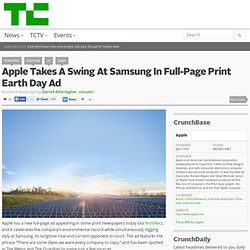 The ad features the phrase “There are some ideas we want every company to copy,” and has been spotted in The Metro and The Guardian to name just a few sources. Apple’s ad also includes copy that makes it clear Apple is talking about efforts like using 100% renewable energy sources to power its massive data centers, and its use of materials made without ingredients that include harmful toxins in building its devices. How To Build A $50 Greenhouse In Your Yard – Free Plans! It is time that we all became a little more self reliant? 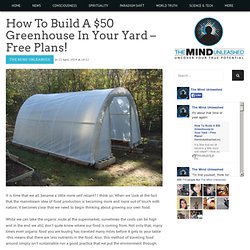 I think so. When we look at the fact that the mainstream idea of food production is becoming more and more out of touch with nature, it becomes clear that we need to begin thinking about growing our own food. 214 Technologies Is Crowdfunding A Smart Doorbell Called Chui. FIO Is A Simple, Attractive Time Zone Tracker. One of the things I love about working with people all around the world is that I feel like an international woman of mystery.

Unfortunately, by “mystery” I mean time zones and my propensity for mixing them up, especially since I live in a country that does not participate in daylight saving time. Missing phone appointments or calling people obscenely early in the morning is embarrassing, so I was happy to install FIO (an acronym for Figure It Out). The free Chrome extension lets you pick a 12-hour or 24-hour clock and up to five locations, including your own. Hands On With Facebook Nearby Friends [Video]: No More Checkins. Facebook Nearby Friends is based around broadcasting how far you are from friends, not your exact coordinates, and that’s why it could succeed where other location apps have failed. But while we might be comfortable sharing proximity, that doesn’t mean we’re comfortable doing it on Facebook.

Functionally, Facebook struck upon a smart innovation with proximity. For a deep look at how Facebook Nearby Friends works, read my article on its launch from Thursday. The opt in feature is rolling out to Facebook for iOS and Android over the coming weeks. Should we deliberately put our careers in danger? Floating Seawer Skyscraper Rids The World’s Oceans Of Plastic While Generating Clean Energy. Keen On… Nanotechnology: How It Changes Everything. The Experiment On Five Monkeys That Nobody With Power Ever Wants You To Share. Check Out These Amazing Towers In Ethiopia That Harvest Clean Water From Thin Air. 50 Tweetable Twitter Tips You Wish You Knew Years Ago. Want to get more followers and increase engagement on Twitter? Houdini Honey Badgers Can Escape From Anywhere.