Spain's campaigning judge seeks change in law to prosecute global corporations. He has brought down governments, closed newspapers and ordered the arrests of dictators. 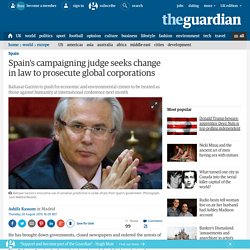 Now Baltasar Garzón, the Spanish judge who redefined the boundaries of cross-border justice, has set his sights on widening the definition of international law to target corporations that carry out economic or environmental crimes. “Humanitarian and economic crises cause more deaths around the world than all of the genocides we have documented,” said Garzón, who made headlines around the world when he ordered the 1998 arrest of former Chilean dictator Augusto Pinochet in London. Next month, he and other leading activists, judges and academics from a dozen countries will come together at a conference in Buenos Aires to push forward the idea that economic and environmental crimes be considered crimes against humanity, akin to torture or genocide.

These actions fit within the definition of crimes against humanity, as they affect certain sectors of the population and trample on human rights, he said. Stadsgenoot zet Nico van den Ham op zwart en op straat. South Africa: Michael Tellinger: Our Countries are Corporations. From: Michael Tellinger Sent: 31 January 2013 02:07 AM To: Lynton Subject: Our Coutries Are Corporations Our countries are registered as corporations. 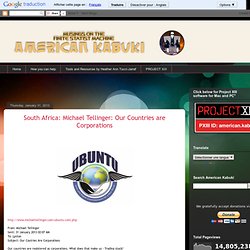 What does that make us - Trading stock? Dear Lynton. EDGAR Search Results. The MEPs who became corporate lobbyists. From MEP to lobbyist Karin Riis-Jørgensen was a Danish MEP for 15 years and during this time she sat on the committee for internal market and consumer protection, amongst others. 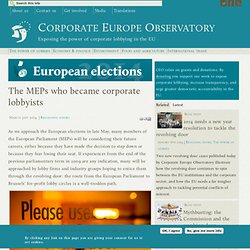 Shortly after she left the Parliament in 2009, she became a senior advisor at lobby firm Kreab Gavin Anderson. Kreab is one of Brussels' biggest lobby consultancies with an annual lobby turnover of nearly four million euros. 'Openheid over farmanetwerk' The Dollar and the Deep State Washington. If we consider the Fed’s policies (tapering, etc.) solely within the narrow confines of the corporatocracy or a strictly financial context, we are in effect touching the foot of the elephant and declaring the creature to be short and roundish. 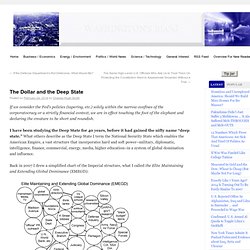 I have been studying the Deep State for 40 years, before it had gained the nifty name “deep state.” What others describe as the Deep State I term the National Security State which enables the American Empire, a vast structure that incorporates hard and soft power–military, diplomatic, intelligence, finance, commercial, energy, media, higher education–in a system of global domination and influence. Back in 2007 I drew a simplified chart of the Imperial structure, what I called the Elite Maintaining and Extending Global Dominance (EMEGD):

G-20 Agrees To Grow Global Economy By $2 Trillion, Has No Idea How To Actually Achieve It. Apparently all it takes to kick the world out of a secular recession and back into growth mode, is for several dozen finance ministers and central bankers to sit down and sign on the dotted line, agreeing it has to be done. 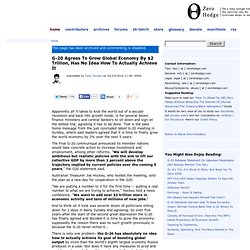 That is the take home message from the just concluded latest G-20 meeting in Syndey, where said leaders agreed that it is time to finally grow the world economy by 2% over the next 5 years. The final G-20 communiqué announced its member nations would take concrete action to increase investment and employment, among other reforms. Corporate Colonialism: Winners and Losers of Global 'Free' Trade. UN panel: corporate tax avoidance is Africa's biggest financial drain. Can Thabo Mbeki, the second president in post-apartheid South Africa, help save the continent from the scourge of corruption and illicit money outflows? 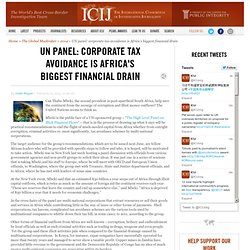 The United Nations seems to think so. Mbeki is the public face of a UN-sponsored group – “The High Level Panel on Illicit Financial Flows” -- that is in the process of drawing up what it says will be practical recommendations to end the flight of much-needed capital from Africa whether from outright corruption, criminal activities or, most significantly, tax avoidance schemes by multi-national corporations. The target audience for the group’s recommendations, which are to be issued next June, are fellow African leaders who will be provided with specific steps to follow and who, it is hoped, will be motivated to take action. Mbeki was in New York last week hosting a panel discussion with officials from various government agencies and non-profit groups to solicit their ideas. Fake-food scandal revealed as tests show third of products mislabelled. Consumers are being sold food including mozzarella that is less than half real cheese, ham on pizzas that is either poultry or "meat emulsion", and frozen prawns that are 50% water, according to tests by a public laboratory. 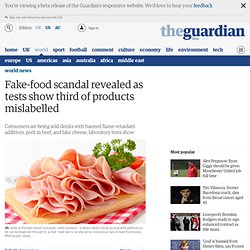 The checks on hundreds of food samples, which were taken in West Yorkshire, revealed that more than a third were not what they claimed to be, or were mislabelled in some way. Their results have been shared with the Guardian. Testers also discovered beef mince adulterated with pork or poultry, and even a herbal slimming tea that was neither herb nor tea but glucose powder laced with a withdrawn prescription drug for obesity at 13 times the normal dose. Against Fascism: Towards the Separation of Business and State. The relationship between trade rules and the operations of multinational corporations. Hoe corporatisme telkens wint: het EPD/LSP.