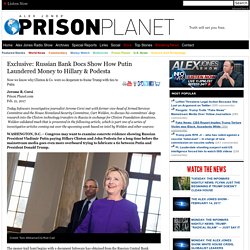 Corsi Prison Planet.com Feb. 21, 2017 Today Infowars investigative journalist Jerome Corsi met with former vice-head of Armed Services Committee and the House Homeland Security Committee, Curt Weldon, to discuss his committees’ deep research into the Clinton technology transfers to Russia in exchange for Clinton Foundation donations. Weldon validated much that is presented in the following article, which is part one of a series of investigative articles coming out over the upcoming week based on intel by Weldon and other sources: WASHINGTON, D.C. – Congress may want to examine concrete evidence showing Russian President Vladimir Putin paying Hillary Clinton and John Podesta for a long time before the mainstream media goes even more overboard trying to fabricate a tie between Putin and President Donald Trump. 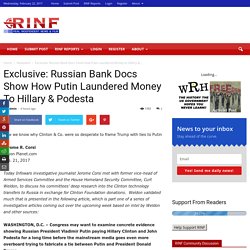 CorsiPrison Planet.comFeb. 21, 2017 Today Infowars investigative journalist Jerome Corsi met with former vice-head of Armed Services Committee and the House Homeland Security Committee, Curt Weldon, to discuss his committees’ deep research into the Clinton technology transfers to Russia in exchange for Clinton Foundation donations. Weldon validated much that is presented in the following article, which is part one of a series of investigative articles coming out over the upcoming week based on intel by Weldon and other sources: WASHINGTON, D.C. – Congress may want to examine concrete evidence showing Russian President Vladimir Putin paying Hillary Clinton and John Podesta for a long time before the mainstream media goes even more overboard trying to fabricate a tie between Putin and President Donald Trump. 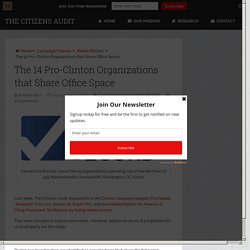 Last week, The Citizens Audit exposed how the Clinton Campaign Illegally Purchased “Research” from pro-Democrat Super PAC, and how Media Matters for America is Filing Fraudulent Tax Returns by hiding rental income. This week, we plan to expose even more. However, before we do so, it’s important for us to properly set the stage. During our investigation, we identified 14 organizations that share the following address: 455 Massachusetts Avenue NW, 6th Floor, Washington, DC 20001. ZeroBin. Chelsea Clinton Being Groomed to Buy Seat in Congress by NWO Handlers — & 'Clinton Cash' Documentary.

While some pundits are declaring the Clinton political dynasty dead, sources tell us that it is far ... 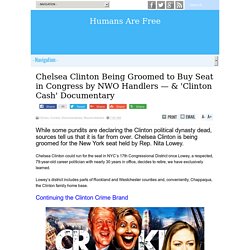 While some pundits are declaring the Clinton political dynasty dead, sources tell us that it is far from over. Chelsea Clinton is being groomed for the New York seat held by Rep. Nita Lowey. Chelsea Clinton could run for the seat in NYC’s 17th Congressional District once Lowey, a respected, 79-year-old career politician with nearly 30 years in office, decides to retire, we have exclusively learned. Lowey’s district includes parts of Rockland and Westchester counties and, conveniently, Chappaqua, the Clinton family home base. False Philanthropy: III. Executive Summary: Introduction & Overview. Summary Review of Selected Intentionally False Representations in Clinton Foundation Public Filings Important Disclaimer Information concerning the Bill, Hillary & Chelsea Clinton Foundation (the “Clinton Foundation”) that is analyzed in the First Interim Report (the “First Foundation Report”), the Second Interim Report (the “Second Foundation Report”), and supporting Exhibits is derived primarily from publicly available primary and secondary sources. 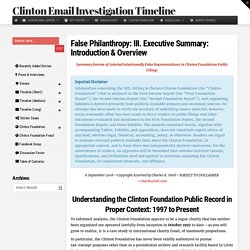 No attempt has been made to verify the accuracy of underlying source material; however, every reasonable effort has been made to direct readers to public filings and other documents evaluated and mentioned in the First Foundation Report, the Second Foundation Report, and these Exhibits. The analysis contained herein, together with accompanying Tables, Exhibits, and Appendices, does not constitute expert advice of any kind, whether legal, financial, accounting, policy, or otherwise. 6 September 2016—Copyright Asserted by Charles K.

Is The Clinton Foundation Doomed? 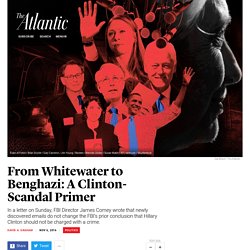 That’s FBI Director James Comey’s new message to Congress and, by extension, the American public on Sunday. A little over a week ago, Comey shook the presidential election with a letter to the chairs of several congressional committees, announcing that the FBI had found a new tranche of emails pertinent to its investigation into Hillary Clinton’s use of a private email server while secretary of state. The emails came from an unrelated case, he said—since widely reported to be an investigation into alleged sexts to a teenager from Anthony Weiner, whose estranged wife is a top Clinton aide—and there was no timeline for finishing the review.

Exclusive: Clinton charities ignore law requiring them to disclose millions from foreign donors - Longform Story. New York Attorney General Eric Schneiderman has the power to force the Clinton Foundation and the Clinton Health Access Initiative to publicly disclose the names of foreign governments and the millions they donate each year to the charities but he’s not doing it, a Scripps News investigation has found. 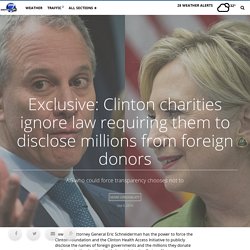 Schneiderman’s failure to require compliance with New York law and written instructions from his own office keeps the public in the dark about whether the foreign governments that gave money to the Clinton charities also had special access to Hillary Clinton when she was secretary of state, experts in private foundation law say. New York state has long required more transparency from non-profits operating within its borders than many other regulators. A Scripps Washington Bureau review of tax returns and regulatory filings found that year after year the Clinton charities have ignored New York law and related instructions. Here’s what you need to know. Log In - New York Times. Foreign Influence Explorer. Clintons’ foundation has raised nearly $2 billion — and some key questions. Since its creation in 2001, the Bill, Hillary and Chelsea Clinton Foundation has raised close to $2 billion from a vast global network that includes corporate titans, political donors, foreign governments and other wealthy interests, according to a Washington Post review of public records and newly released contribution data. 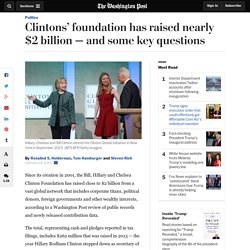 The total, representing cash and pledges reported in tax filings, includes $262 million that was raised in 2013 — the year Hillary Rodham Clinton stepped down as secretary of state and began to devote her energies to the foundation and to a likely second run for president. The financial success of the foundation, which funds charitable work around the world, underscores the highly unusual nature of another Clinton candidacy. The organization has given contributors entree, outside the traditional political arena, to a possible president. And many of the foundation’s biggest donors are foreigners who are legally barred from giving to U.S. political candidates. U.S. Foreign governments gave millions to foundation while Clinton was at State Dept. The Clinton Foundation accepted millions of dollars from seven foreign governments during Hillary Rodham Clinton’s tenure as secretary of state, including one donation that violated its ethics agreement with the Obama administration, foundation officials disclosed Wednesday. 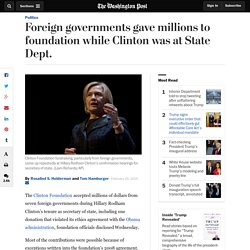 Most of the contributions were possible because of exceptions written into the foundation’s 2008 agreement, which included limits on foreign-government donations. The agreement, reached before Clinton’s nomination amid concerns that countries could use foundation donations to gain favor with a Clinton-led State Department, allowed governments that had previously donated money to continue making contributions at similar levels. The new disclosures, provided in response to questions from The Washington Post, make clear that the 2008 agreement did not prohibit foreign countries with interests before the U.S. government from giving money to the charity closely linked to the secretary of state. Foreign dollars Then-Sen. True. Exclusive: Clinton charities will refile tax returns, audit for other errors. Clinton Foundation Failed to Disclose 1,100 Foreign Donations - Bloomberg.

Hillary Clinton’s presidential run is prompting new scrutiny of the Clintons’ financial and charitable affairs—something that’s already proved problematic for the Democratic frontrunner, given how closely these two worlds overlap. 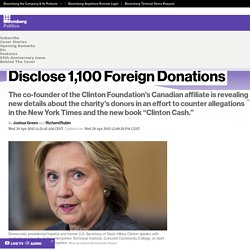 Last week, the New York Times examined Bill Clinton’s relationship with a Canadian mining financier, Frank Giustra, who has donated millions of dollars to the Clinton Foundation and sits on its board. Clinton, the story suggests, helped Giustra’s company secure a lucrative uranium-mining deal in Kazakhstan and in return received “a flow of cash” to the Clinton Foundation, including previously undisclosed donations from the company’s chairman totaling $2.35 million. Giustra strenuously objects to how he was portrayed. “It’s frustrating,” he says. “We’re not trying to hide anything,” he says. Combating Malnutrition and Poverty in Malawi. This Q&A blog is part of a series called #SeedingOpportunity that explores the challenges and opportunities related to smallholder farming around the world. We asked Lustia Nkhoma, field coordinator for the Clinton Development Initiative in Malawi, to tell us more about their work with smallholder farmers.

The Bill, Hillary & Chelsea Clinton Foundation (the Clinton Foundation) has now released its 2013 financial reports to the public. Given the substantial public interest in all things Clinton, I thought I would discuss a few observations from these financials. First, though, a couple of caveats: Consolidated financial statements have not yet been released, so I am instead relying on the Form 990 filings of the organization. Things You Can Learn about The Clinton Foundation from Its Financial Statements. As Hillary Clinton and her presidential aspirations begin to take center stage in political discussions, some of the attention has focused on the Clintons' family foundation – many are already speculating about whether the foundation will prove to be a political asset or liability for Secretary Clinton. While I can't speak to the politics angle, I do think it's worth considering what one can learn about the foundation and its activities from its financial statements.

The following observations come from a review of the Clinton Foundation's GAAP financial statements (that reflect a consolidation of the Bill, Hillary, & Chelsea Clinton Foundation and its controlled entity the Clinton Health Access Initiative). Counting on Charity: Is the Clinton Foundation Leading the Pack in Transparency? Counting on Charity: About the Claim that the Clinton Foundation only Spends 10% on Charity. This claim reflects a fundamental misunderstanding about nonprofit accounting. Nonprofits disclose how much of their expenses are on the mission ("programs"), and how much are on fundraising and administration ("supporting services"). From the Clinton Foundation's most recent (consolidated) financial statements, a full 88% of its expenses are classified as program expenses, meaning 88% of spending can be attributed to current efforts to achieve its mission. The dichotomy between this and the claim that only 10% is spent on charity arises because only a small subset of the program expense figure represents grants to other charities – if only such grants are considered "program" expenses, then the figure drops from 88% to 13%.

The U.S. Constitution Actually Bans Hillary's Foreign Gov't. Payola. PunditFact: A Case Study In Fact-Free Hackery. If you like liberal ideologues who label inconvenient facts as “false,” then you’ll love PunditFact. Why? Because PunditFact just declared that a demonstrably true fact was false because, according to PunditFact, the factual claim “ignores critical facts that would give a different impression.” Facts are strange that way. They do tend to give an impression of the truth, even if some people find that impression discomfiting. It gets more embarrassing than that, though. Unease at Clinton Foundation Over Finances and Ambitions. Now those efforts are taking on new urgency.

Shut Up About the Clinton Foundation's Problems for a Minute to Look at Its Programs — Inside Philanthropy. Rush Limbaugh says Clinton Foundation spends just 15 percent on charity, 85 percent on overhead. Amazon. Amazon. How the Clintons’ Haiti development plans succeed — and disappoint. NYC: Protesters Target Bill Clinton over Conditions in Haiti 6 Years After Earthquake. Haitians Protest Outside Hillary Clinton's Office Over 'Billions Stolen' by Clinton Foundation. The Clintons’ Haiti Screw-Up, As Told By Hillary’s Emails. Marriott Hotel Project. A glittering industrial park in Haiti falls short. The King and Queen of Haiti. Log In - New York Times. A Complicated Man: The Life of Bill Clinton as Told by Those who Know Him - Michael Takiff.

Albright: 'special place in hell' for women who don't support Clinton. Why Did the Saudi Regime and Other Gulf Tyrannies Donate Millions to the Clinton Foundation? Greenwald: "Why Did Saudi Regime & Other Gulf Tyrannies Donate Millions to Clinton Foundation?" Confessions of a Clinton reporter: The media's 5 unspoken rules for covering Hillary.