This Doctor Destroys Cannabis Myths Once And For All. This article was first published on IllegallyHealed.com. 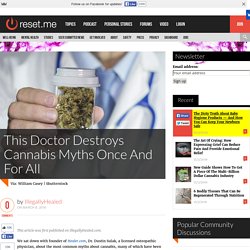 How To Re-Moisten Dry Weed. At one point or another you probably ended up with some weed that was too dry to handle. 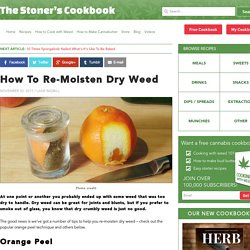 Dry weed can be great for joints and blunts, but if you prefer to smoke out of glass, you know that dry crumbly weed is just no good. The good news is we’ve got a number of tips to help you re-moisten dry weed – check out the popular orange peel technique and others below. Orange Peel. New Study Finds Marijuana Safer Than Alcohol Or Tobacco. Using a novel method to measure the risk of mortality associated with the use of various legal and illegal drugs, scientists have confirmed what earlier studies have indicated: alcohol is the deadliest, while marijuana is the least risky. 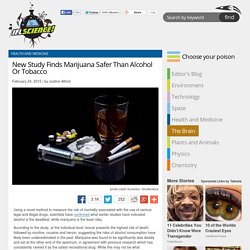 According to the study, at the individual level, booze presents the highest risk of death, followed by nicotine, cocaine and heroin, suggesting the risks of alcohol consumption have likely been underestimated in the past. New Strain of Cannabis Discovered. It was thought that Cannabis sativa, indica and ruderalis were the only three species of cannabis that existed, but in 2010 hikers in Australia’s Blue Mountains came across a single plant that resembled cannabis, and donated it to researchers at the University of Sydney. 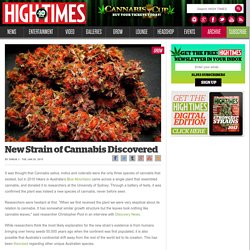 Through a battery of tests, it was confirmed the plant was indeed a new species of cannabis, never before seen. Hemp Based Batteries Could Change The Way We Store Energy Forever. As hemp makes a comeback in the U.S. after a decades-long ban on its cultivation, scientists are reporting that fibers from the plant can pack as much energy and power as graphene, long-touted as the model material for supercapacitors. 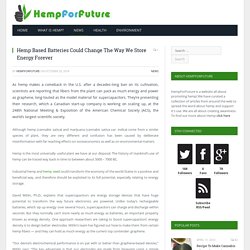 They’re presenting their research, which a Canadian start-up company is working on scaling up, at the 248th National Meeting & Exposition of the American Chemical Society (ACS), the world’s largest scientific society. New Study Finds Legalizing Medical Marijuana Leads to Fewer Prescription Drug Overdose Deaths. A study published in the journal JAMA Internal Medicine, on Monday, found that states that had legalized medical marijuana had seen a 25 percent drop in deaths related to prescription drug overdoses. 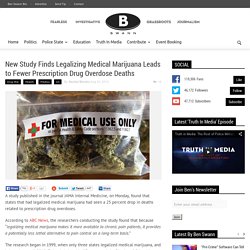 According to ABC News, the researchers conducting the study found that because “legalizing medical marijuana makes it more available to chronic pain patients, it provides a potentially less lethal alternative to pain control on a long-term basis.” I heart intelligence Researchers prove marijuana doesn’t affect your intelligence. Study: The ‘Gateway Drug’ Is Alcohol, Not Marijuana. How many times have you heard that marijuana is a ‘gateway drug’ that leads to more harmful drugs? 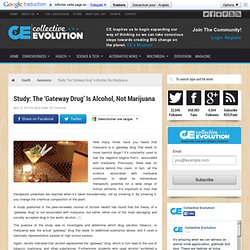 It’s constantly used to fuel the negative stigma that’s associated with marijuana. Previously, there was no science behind this claim. A Marijuana Lubricant That Promises a 15-Minute Climax… Women, their partners, and in general, marijuana lovers of are in luck. 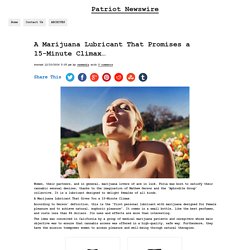 Foria was born to satisfy their cannabic sensual desires, thanks to the imagination of Mathew Gerson and the ‘Aphrodite Group’ collective. Hemp Based Batteries Could Change The Way We Store Energy Forever. University Of Texas Just Published Their Research Into The Long-Term Effects Of Marijuana. Is Medical Marijuana The Answer To Americas Prescription Pain Killer Epidemic? New Study Says Yes. A new study recently published in the journal JAMA Internal Medicine has found that in the 13 states in America that have legalized the use of medicinal marijuana, a combined 25 percent reduction in prescription drug overdose rates has been documented compared to the states that have not legalized the use of medicinal marijuana. (1) The study concluded that: “Medical cannabis laws are associated with significantly lower state-level opioid overdose mortality rates. 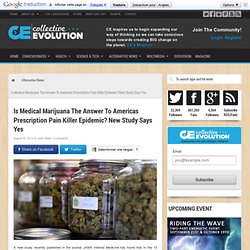 Further investigation is required to determine how medical cannabis laws may interact with policies aimed at preventing opioid analgesic overdose.”(1) In total the study found that states with legal medical marijuana experienced approximately 1700 fewer painkiller related deaths in 2010 that would have happened if medical marijuana wasn’t legalized. “Prescriptions for opioid painkillers for chronic pain have increased in the United States and so have overdose deaths. The study was conducted Dr. Hemp Plant Found To “Eat” Radiation and Drive Away Toxicity – Hemp Fields Should Be Planted Around Fukushima. How SMOKING MARIJUANA Can PROTECT YOU FROM EBOLA. Doctor Suggests That Marijuana Can Protect You From Ebola. According to Dr. 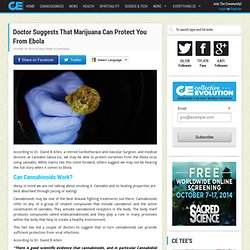 David B Allen, a retired Cardiothoracic and Vascular Surgeon, and medical director at Cannabis Sativa Inc, we may be able to protect ourselves from the Ebola virus using cannabis. While claims like this come forward, others suggest we may not be hearing the full story when it comes to Ebola. Can Cannabinoids Work? (Keep in mind we are not talking about smoking it. Study Finds Marijuana To Beat Current Alzheimer’s Drugs. Findings from the experiments, using a cellular model of Alzheimer’s disease, were reported online in the Journal of Alzheimer’s Disease. Researchers from the USF Health Byrd Alzheimer’s Institute showed that extremely low doses of THC reduce the production of amyloid beta, found in a soluble form in most aging brains, and prevent abnormal accumulation of this protein — a process considered one of the pathological hallmarks evident early in the memory-robbing disease.

These low concentrations of THC also selectively enhanced mitochondrial function, which is needed to help supply energy, transmit signals, and maintain a healthy brain. “Decreased levels of amyloid beta means less aggregation, which may protect against the progression of Alzheimer’s disease. Since THC is a natural and relatively safe amyloid inhibitor, THC or its analogs may help us develop an effective treatment in the future.” Dr. A Recipe To Make Cannabis Oil For A Chemotherapy Alternative. Awareness with regards to cannabis as a treatment and potential cure for cancer has been rapidly increasing over the past few years. Several studies over the last decade have clearly (without question) demonstrated the anti-tumoral effects of the plant. Cannabinoids (any group of related compounds that include cannabinol and the active constituents of cannabis) activate cannabinoid receptors in the body.

The human body itself produces compounds called endocannabinoids and they play a very important role in many processes within the body to help create a healthy environment. Finally, Some Hard Science on Medical Marijuana for Epilepsy Patients. DEA Is Absolutely Losing the War on Marijuana Politics  This past Saturday, the LA Times published a fantastic article, “DEA may be losing the war on marijuana politics,” outlining the federal agency’s downfall from undisputed moral high ground to the wrong side of history. It explains that members of Congress from both parties are finally catching up to the public and supporting marijuana reform, and how DEA Administrator Michele Leonhart’s refusal to support sensible reforms has led to sharp criticism from Congress and even the White House. But I don’t think the title goes far enough: there’s no longer any doubt that the agency’s propaganda has failed. The DEA is absolutely, indisputably, hands-down losing the war on marijuana politics.

Science Debunks 10 Biggest Cannabis Myths. Unitedforcare.nationbuilder. New Report Blasts DEA For Spending 4 Decades Obstructing Marijuana Science. The Drug Enforcement Administration has been impeding and ignoring the science on marijuana and other drugs for more than four decades, according to a report released this week by the Drug Policy Alliance, a drug policy reform group, and the Multidisciplinary Association for Psychedelic Studies, a marijuana research organization. “The DEA is a police and propaganda agency,” Ethan Nadelmann, executive director of the Drug Policy Alliance, said Wednesday. “It makes no sense for it to be in charge of federal decisions involving scientific research and medical practice.” The report alleges that the DEA has repeatedly failed to act in a timely fashion when faced with petitions to reschedule marijuana. The drug is currently classified as Schedule I, which the DEA reserves for the “most dangerous” drugs with “no currently accepted medical use.”

Schedule I drugs, which include substances like heroin and LSD, cannot receive federal funding for research. 27 Reasons Why U.S. Cannabis For Kids: Israel Pioneers Paediatric Pot. Medical marijuana is estimated to be a $40 million industry in Israel, and research conducted there has helped fuel America’s own medical marijuana business, which is expected to be worth more than $2 billion this year alone.

Many doctors in the United States and elsewhere question the efficacy of medical marijuana and call for more research on cannabis before it is broadly legalized. Minnesota Becomes 22nd State to Legalize Medical Marijuana, But No Smoking Allowed. Medical Marijuana Shows Promise Against Autoimmune Diseases. THC (tetrahydrocannabinol) can suppress rodents' immune systems, according to a study at the University of South Carolina. If replicated in humans this could improve the prospects of using medical marijuana against autoimmune diseases such as arthritis, type1 diabetes and multiple sclerosis.

If I told you there was a plant available to us today that could be grown in pretty much any soil, requires no pesticides and it takes very little maintenance to grow, and this magical plant could be used for a very large number of necessities and goods we use today yet we don’t use it, would you think to yourself “Joe you must be high or on some other cheap drug?” Could Legalization of Marijuana Be in Texas's Future? As you drive up the long, gravel-lined drive of the small clapboard house in south Texas, not much seems unusual. Mobiledefault. Facebook and Monsanto are Basically Owned by the Same People. Got Hemp Milk? These Amazing Health Benefits Will Have You Asking. Hemp milk is an incredibly nutritious and tasty alternative to cows milk as it supplies the body with essential nutrients without the harm that dairy causes to the body.