Digital Media for Playing and Learning with Games

Jesse Schell @ DICE2010 (Part 3) Foldit. Nintendo's Official Home for Professor Layton. Sodaplay.com. BrainPOP - Animated Educational Site for Kids - Science, Social Studies, English, Math, Arts. Games. I Have No Words & I Must Design. This article was published in 1994 in Interactive Fantasy #2, a British roleplaying journal. A more recent version of the piece may be found here. Soapbox: Learning to Play to Learn - Lessons in Educational Game Design. An Education in Educational Games Educational games are a hot topic these days. 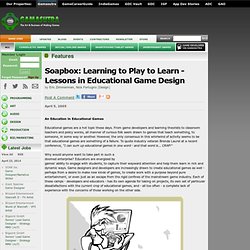 From game developers and learning theorists to classroom teachers and policy wonks, all manner of curious folk seem drawn to games that teach something, to someone, in some way or another. Find, create and share lesson plans and teaching tools to empower your classroom. Atlantis Remixed. Game Educators Rant. Gorogoa.

Exploitationware. I had been trying to ignore gamification, hoping it would go away, like an ill-placed pimple or an annoying party guest or a Katy Perry earworm. 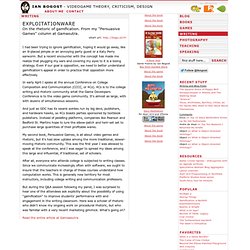 But a recent encounter with the concept has made me realize that plugging my ears and covering my eyes to it is a losing strategy. Even if our goal is opposition, we need to better understand gamification's appeal in order to practice that opposition more effectively. In early April I spoke at the annual Conference on College Composition and Communication (CCCC, or 4Cs). 4Cs is to the college writing and rhetoric community what the Game Developers Conference is to the video game community. It's almost as large, with with dozens of simultaneous sessions. And just as GDC has its swank soirées run by big devs, publishers, and hardware hawks, so 4Cs boasts parties sponsored by textbook publishers. After all, everyone who attends college is subjected to writing classes. Read the entire article at Gamaasutra. Gamification Can Kill. Cubicles are Cages for People Let’s face it, cubicles are cages for people. 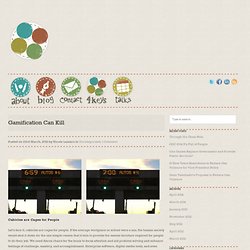 If the average workplace or school were a zoo, the human society would shut it down for the one simple reason that it fails to provide the mental furniture required for people to do their job. We need Aeron chairs for the brain to focus attention and aid problem solving and enhance feelings of challenge, mastery, and accomplishment. Enterprise software, digital media tools, and even email can benefit from game-inspired engagement techniques. Schools structure kids to work in factories that no longer exist – except in Asia. Mental Furniture. World Peace and other 4th-Grade Achievements Trailer. 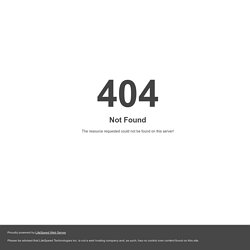 At Teachers College, Columbia University, we have designed a gamification layer called Scholar’s Quest. Scholar’s Quest uses game mechanics and game-like thinking to address some of the biggest challenges facing K12 and higher education. We are presently in the middle of pilot testing this experience. Gamasutra - The Art & Business of Making Games. Games for Change Connect page. Learning Games Network. The Magic Potion of Game Dynamics. Michael Wu, Ph.D. is Lithium's Principal Scientist of Analytics, digging into the complex dynamics of social interaction and group behavior in online communities and social networks. 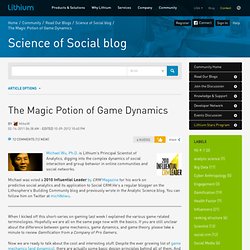 Michael was voted a 2010 Influential Leader by CRM Magazine for his work on predictive social analytics and its application to Social CRM.He's a regular blogger on the Lithosphere's Building Community blog and previously wrote in the Analytic Science blog. You can follow him on Twitter at mich8elwu. When I kicked off this short-series on gaming last week I explained the various game related terminologies.

Hopefully we are all on the same page now with the basics. Now we are ready to talk about the cool and interesting stuff. The Fogg Behavior Model The goal of game dynamics is to drive a user-desired behavior predictably. To understand game dynamics (and gaming mechanics), I will use a simple behavior model by Prof B. MotivationAbilityTrigger. The Science and Psychology of Gamification. Michael Wu, PhD, principal scientific analyst for Lithium, has started a mini-series of blog posts at their Lithosphere blog that delve into the science behind gamification. 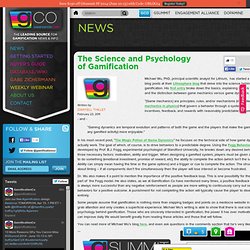 His first entry broke down the basics, explaining what is gamification, and the distinction between game mechanics versus game dynamics. “[Game mechanics] are principles, rules, and/or mechanisms (much like mechanics in physics) that govern a behavior through a system of incentives, feedback, and rewards with reasonably predictable outcome.” World Wide Workshop. World of Warcraft. The Teachable Agents Group @ Vanderbilt University. Highlight: In February 2014, Betty's Brain was featured in The Tennessean. 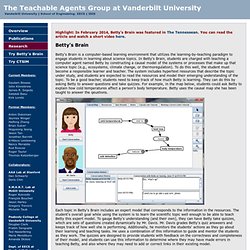 You can read the article and watch a short video here. Betty's Brain Betty's Brain is a computer-based learning environment that utilizes the learning-by-teaching paradigm to engage students in learning about science topics. In Betty's Brain, students are charged with teaching a computer agent named Betty by constructing a causal model of the systems or processes that make up that science topic (e.g., ecosystems, climate change, or thermoregulation). To do this well, the student must become a responsible learner and teacher. Each topic in Betty's Brain includes an expert model that corresponds to the information in the resources.