JVTE v13n2 - The Effects Of Cooperative Learning Methods On Achievement, Retention, And Attitudes Of Home Economics Students In North Carolina. 5 Elements of Cooperative Learning. POSSESSION IN HUMANS: AN EXPLORATORY STUDY OF ITS MEANING AND MOT. Buy & download fulltext article: Your trusted access to this article has expired. 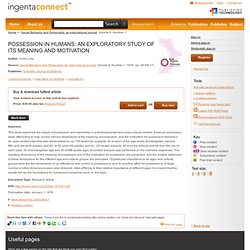 Price: $39.00 plus tax (Refund Policy) Abstract: This study examined the nature of possession and ownership in a developmental and cross-cultural context. IS THERE AN INSTINCT OF POSSESSION? - LITWINSKI - 2011 - British Journal of Psychology. General Section. 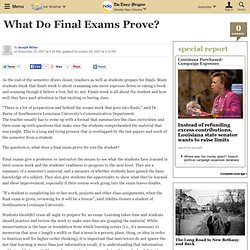 Many students think that finals week is about cramming one more espresso down or taking a book and scanning though it before a test, but its not. Finals week is all about the student and how well they have paid attention in that exciting or boring class. "There is a lot of preparation and behind the scenes work that goes into finals," said Dr.

Burns of Southeastern Louisiana University's Communication Department. The teacher usually has to come up with a format that summarizes the class curriculum and then come up with questions that make sure the students comprehended the material that was taught. Freedom from the tyranny of league tables. Don't let dubious Pisa league tables dictate how we educate our children. The triennial results from the Programme for International Assessment (Pisa), due on Tuesday but trailed in the Sunday press, have become education's equivalent of the football World Cup. 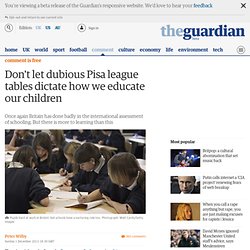 And the performance of the British teams is just as mediocre, giving more leverage to politicians determined to get a few easy cheers from slagging off teachers. In the 2009 tests the UK was around average, with England, Scotland and Northern Ireland roughly on a par, and Wales doing even worse. The English and Scots did better than Peruvians, as you'd expect, but they were not up there with the Chinese, Singaporeans, Koreans, Japanese or Estonians and Poles. 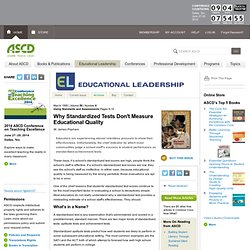 James Popham A standardized test is any examination that's administered and scored in a predetermined, standard manner. There are two major kinds of standardized tests: aptitude tests and achievement tests. Standardized aptitude tests predict how well students are likely to perform in some subsequent educational setting. The most common examples are the SAT-I and the ACT both of which attempt to forecast how well high school students will perform in college. But standardized achievement-test scores are what citizens and school board members rely on when they evaluate a school's effectiveness.

A Standardized Test's Assessment Mission The folks who create standardized achievement tests are terrifically talented. Such relative inferences about a student's status with respect to the mastery of knowledge and/or skills in a particular subject area can be quite informative to parents and educators. Accurate Differentiation As a Deity. Should school exams be replaced with different ways of assessing skills and knowledge? Education in England - Chapter 11. Although the government was adamant it would keep the tests in England (they had already been abolished in other parts of the UK), it did at least make some attempt to respond to the worries about them by trialling new 'lighter touch' tests. 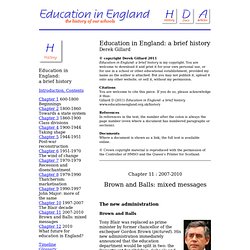 More than 400 schools took part in the two-year 'Making Good Progress' pilot project in which children were tested when their teachers felt they were ready rather than at the end of the key stage. Ministers hoped the new tests, which formed part of the Children's Plan, would replace the existing SATs tests from 2010 (The Guardian 9 May 2008). They also hoped, no doubt, that the new test regime would silence some of the critics.

But disaster was about to strike. League tables: only half the story. School league tables are now as old as the 15-year-old pupils whose GCSE results they report. 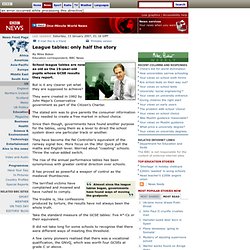 But is it any clearer yet what they are supposed to achieve? They were created in 1992 by John Major's Conservative government as part of the Citizen's Charter. The stated aim was to give parents the consumer information they needed to create a free market in school choice. Since then though, governments have found another purpose for the tables, using them as a lever to direct the school system down one particular track or another. Stop playing politics with teenagers’ exams. GCSE reforms: pupils to be graded from one to nine. Education.PDF. Chapter1. Purpose of Assessment by Jarred James Breaux. Exams are a Formative Summative Assessment by Heath Sawyer. Heath Sawyer's image for: "Exams are a Formative Summative Assessment" 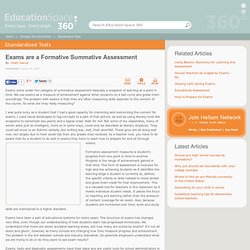 Our schools exam system is no longer fit for purpose. It was a sorry sight. 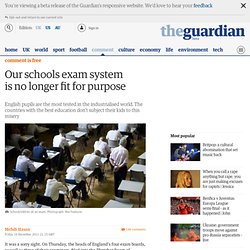 On Thursday, the heads of England's four exam boards, as well as three of their examiners, filed into the Thatcher Room of Portcullis House to be quizzed by MPs on the education select committee. The examiners had been secretly filmed by the Daily Telegraph offering teachers advice on how to boost their exam results – from telling them which topics their pupils could expect to be tested on, to advising them on how to "hammer exam technique" – and subsequently suspended by their boards.

However, in the midst of their litany of excuses ("We all make mistakes," whined one examiner; "It was a throwaway figure of speech," wailed another), some revealing remarks were made. Mark Dawe, chief executive of exam board OCR, told MPs there is "an enormous amount of pressure on the system". Suspended examiner Paul Barnes admitted there are "pressures to raise achievements", and that it is a "competitive world".

They have a point. Would our schools get better or worse? Should school exams be replaced with different ways of assessing skills and knowledge. European report on quality of school education.