Introduction. The Harmful Effects of Too Much Screen Time for Kids. Today’s children have grown up with a vast array of electronic devices at their fingertips. They can't imagine a world without smartphones, tablets, and the internet. The advances in technology mean today's parents are the first generation who have to figure out how to limit screen time for children. While digital devices can provide endless hours of entertainment and they can offer educational content, unlimited screen time can be harmful. The American Academy of Pediatrics recommends parents place a reasonable limit on entertainment media. Despite those recommendations, children between the ages of 8 and 18 average 7 ½ hours of entertainment media per day, according to a 2010 study by the Henry J.

Can Too Much Screen Time Hinder Child Development? MONDAY, Jan. 28, 2019 (HealthDay News) -- Young children spend a lot of time fiddling with smartphones, tapping away at tablets and staring at TV screens. 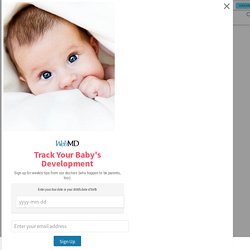 Could this time be taking away from their early physical and mental development? A new study argues that's precisely the case -- screen time can affect how well children perform on developmental tests. "Kids who are being put in front of screens are showing delayed development," said lead researcher Sheri Madigan. Dangers of too much screen time, Singapore News. Baby John Tan loves spending time with his friends Dave and Ava, but his parents are concerned about his choice of company. 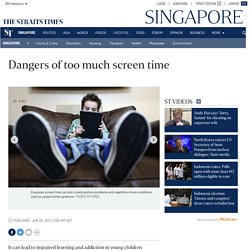 Although Dave and Ava help the 16-month-old learn English through nursery rhymes, they live behind an electronic tablet screen. John is allowed to watch them on YouTube at his grandparents' house when his parents are at work. But John's parents, Mr Tan Wei Yi, 32, and his wife Stacy, 33, keep him away from a screen at home. The dilemma they face is increasingly common in Singapore. Is Too Much Screen Time Affecting Your Child’s Health? Source: ikinciadres/depositphotos article continues after advertisement In a new, groundbreaking study published in Preventive Medicine Reports, researchers at San Diego State University suggest that more than one hour per day of screen time for children ages two to seventeen is associated with lower psychological well-being. 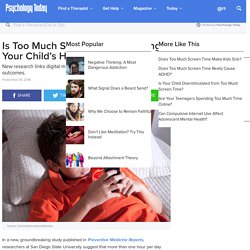 This news may come as a shock to many parents, as one hour of screen time is hardly the norm in today’s households. Gray Matters: Too Much Screen Time Damages the Brain. Source: Lin, Zhou,Lei, et al., used with permission. Red areas designate abnormal white matter in internet addicted teens “Taken together, [studies show] internet addiction is associated with structural and functional changes in brain regions involving emotional processing, executive attention, decision making, and cognitive control.”

--research authors summarizing neuro-imaging findings in internet and gaming addiction (Lin & Zhou et al, 2012) How Too Much Screen Time Affects Kids' Bodies And Brains. It’s no longer controversial to suggest that humans and their smartphones aren’t always a healthy combination. 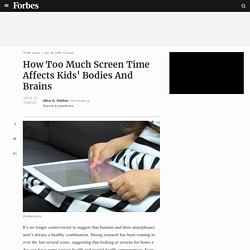 Strong research has been coming in over the last several years, suggesting that looking at screens for hours a day can have some serious health and mental health consequences. Even some of the developers of these products have admitted guilt about their creations, and confessed that they don’t even let their kids use them. A couple of recent studies highlight the connection, and an infographic below expands on it. Yes, Smartphones Are Destroying a Generation, But Not of Kids. Quickly, now: Go rip a smartphone out of the hands of the nearest teen. If you have a teen child of your own, you can start there—or if you have kids under 13, you can take away whatever device they’re presently using. Feel free to just tear your TV off of the wall, if that’s all you’ve got to turn off. What parents should do instead of worrying that smartphones will ‘destroy’ their kids.

No, Smartphones are Not Destroying a Generation. A recent article by psychologist Jean Twenge in the Atlantic warns that "the twin rise of the smartphone and social media has caused an earthquake of a magnitude we’ve not seen in a very long time, if ever" and that "it’s not an exaggeration to describe iGen as being on the brink of the worst mental-health crisis in decades. 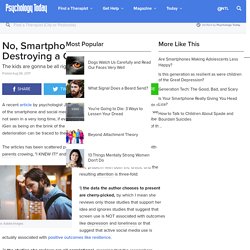 Much of this deterioration can be traced to their phones. " The articles has been scattered prolifically all over my Twitter and Facebook, with parents crowing, "I KNEW IT! " and popular newsmedia wringing their hands. article continues after advertisement Source: Adobe Images The problem with both the article and the resulting attention is three-fold: 2) the studies she reviews are all correlational, meaning that the researchers merely observed associations between certain variables (e.g., smartphone use and depression). 3) the studies she reviews largely ignore social contexts and how people differ, instead reporting only average effects and correlations. Screen time: Little evidence it is harmful for kids, say doctors. The guidance, released by the Royal College of Paediatrics and Child Health (RCPCH) in the UK, says it is impossible to recommend age appropriate time limits, but does, however, recommend avoiding screens an hour before bedtime to help children sleep better, according to a press statement. 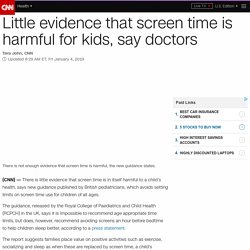 The report suggests families place value on positive activities such as exercise, socializing and sleep as when these are replaced by screen time, a child's wellbeing is affected. To date, screen time has been linked to obesity, mental health problems, heart disease and educational failure, but "the evidence base for a direct 'toxic' effect has always been contested," according to the report. Russell Viner, RCPCH President and professor of adolescent health at the UCL Institute of Child Health in London, told CNN: "We need to recognize that screens are ubiquitous in the modern world. Screen time not intrinsically bad for children, say doctors. Spending time looking at screens is not intrinsically bad for children’s health, say the UK’s leading children’s doctors, who are advising parents to focus on ensuring their children get enough sleep, exercise and family interaction rather than clamping down on phones and laptops. 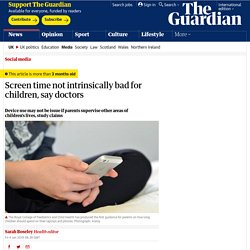 The Royal College of Paediatrics and Child Health has produced the first guidance for parents on how long children should spend on their laptops and phones, which throws the ball firmly back into the parents’ court. Each family should decide what is best for its own members – although all children would benefit from switching off the screen an hour before they go to bed to help them sleep.

The college says the focus for parents should be on what the family is doing together, saying screen time is not an issue if parents have control over other aspects of their children’s lives. “As a parent you want to be able to say: the rules say you shouldn’t use social media for more than a certain period of time. How Much Screen Time Is Too Much? Kids are are still on their enviable, long winter break, and most of them will end up spending some extra time in front of screens. 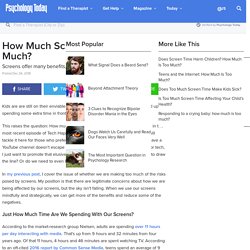 This raises the question: How much screen time is too much? I cover this topic in the most recent episode of Tech Happy Life on my YouTube channel (below) and will tackle it here for those who prefer the written word. The irony that I blog and have a YouTube channel doesn't escape me. Just to be clear, I'm not against screens or tech, I just want to promote that elusive healthy balance. So just where do we need to draw the line? Are Concerns About Screens Much Ado About Nothing? Source: dolgaschov/iStock You might have caught the recent segment on 60 Minutes by Anderson Cooper about the effects of screens on kids and teens. 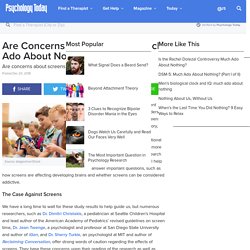 Within the story, Cooper profiled a $300 million, 10-year study funded by the National Institute of Health that involves more than 11,000 children and 21 research sites. Conclusion. Untitled. (1) The effects of smartphones on children. How Is Your Phone Changing You? Why I Don’t Use A Smart Phone. What you are missing while being a digital zombie. (1) How the iPad affects young children, and what we can do about it: Lisa Guernsey at TEDxMidAtlantic.

Related:  Screen time for pre-adolescents: When is it too much?   -  TECH STUFF Automation, Connected homes, Hyper-real world   -  The Harmful Effects of Too Much Screen Time for Kids   -  Dangers of too much screen time, Singapore News   -  (1) How the iPad affects young children, and what we can do about it: Lisa Guernsey at TEDxMidAtlantic   -  Education   -  Enterprise