Various resources from SLIS761 lecture and readings to explore.

WriteOnline App Video. Voki - Home. Great Websites for Kids Selection Criteria. Established by the first ALSC Children and Technology Committee, 1997; revised by the ALSC Great Websites Committee/revisions approved by the ALSC Board of Directors, 2013 Introduction: The Web is a lot like a flea market: there’s a vast selection of sites to choose from but not a lot of order to it. 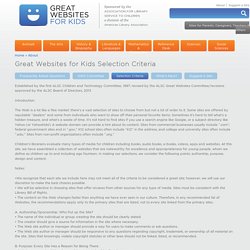 Some sites are offered by reputable “dealers” and some from individuals who want to show off their personal favorite items. Sometimes it’s hard to tell what’s a hidden treasure, and what’s a waste of time. It’s not hard to find sites if you use a search engine like Google, or a subject directory like Yahoo (or YahooKids!) Children’s librarians evaluate many types of media for children including books, audio books, e-books, videos, apps and websites.

Notes: A. B. C. D. Mashable. TechFifteen. Keeping Up with New Tools. There are hundreds and hundreds of web-based tools available! 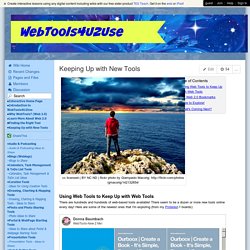 There seem to be a dozen or more new tools online every day! Here are some of the newest ones that I'm exploring (from my Pinterest boards):Donna BaumbachWebTools-New 2 Me! Follow On Many of these have potential for increasing our own productivity, for enhancing our teaching, for organizing our information resources and/or for helping students learn. How to do keep on top of these new tools? Many teacher-librarians and other educators are curating webtools they find useful. 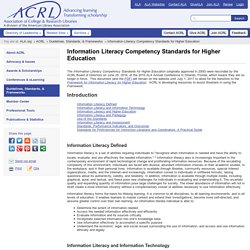 These standards were reviewed by the ACRL Standards Committee and approved by the Board of Directors of the Association of College and Research Libraries (ACRL) on January 18, 2000, at the Midwinter Meeting of the American Library Association in San Antonio, Texas. These standards were also endorsed by the American Association for Higher Education (October 1999) and the Council of Independent Colleges (February 2004). A PDF of this document is available. Skills Overview.

The Big6™ Developed by Mike Eisenberg and Bob Berkowitz, the Big6 is the most widely known and widely used approach to teaching information and technology skills in the world. 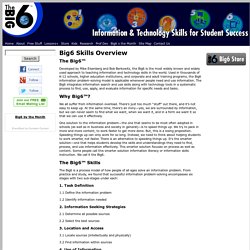 Used in thousands of K-12 schools, higher education institutions, and corporate and adult training programs, the Big6 information problem-solving model is applicable whenever people need and use information. The Big6 integrates information search and use skills along with technology tools in a systematic process to find, use, apply, and evaluate information for specific needs and tasks. Why Big6™? We all suffer from information overload. One solution to the information problem—the one that seems to be most often adopted in schools (as well as in business and society in general)—is to speed things up. 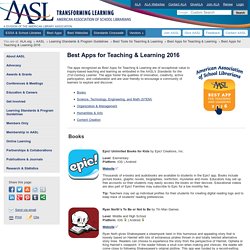 It has everything you need to make a stunning photo comic -- fonts, templates, panels, balloons, captions, photo filtering effects, and lettering art. It is easy to use - just add photos, some text, and quickly you’ll have a finished story. Tip: Writing and creating comics is not just for the Language Arts classroom. The future of the library: How they’ll evolve for the digital age. Photo by Tom Rossiter from the book Building Ideas: An Architectural Guide to the University of Chicago; Photo courtesy Bexar Bibliotech/Facebook; Photo courtesy Mitch Altman/Flickr; Photo courtesy Marc Hall/NC State University Around the turn of the 20th century—a golden age for libraries in America—the Snead Bookshelf Company of Louisville, Ky., developed a new system for large-stack library shelving. 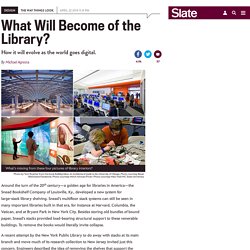 Snead’s multifloor stack systems can still be seen in many important libraries built in that era, for instance at Harvard, Columbia, the Vatican, and at Bryant Park in New York City. Besides storing old bundles of bound paper, Snead’s stacks provided load-bearing structural support to these venerable buildings. To remove the books would literally invite collapse. A recent attempt by the New York Public Library to do away with stacks at its main branch and move much of its research collection to New Jersey invited just this concern. Photo courtesy New York Public Library. 100 Great Ideas for the Future of Libraries. Co-authored by Francine Madera, MADERA inc. 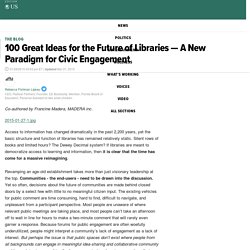 Let the Future Go. The future of libraries won’t be created by libraries. 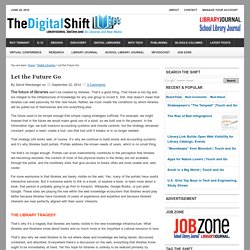 That’s a good thing. That future is too big and too integral to the infrastructure of knowledge for any one group to invent it. Still, that doesn’t mean that libraries can wait passively for this new future. Rather, we must create the conditions by which libraries will be pulled out of themselves and into everything else. The future used to be simple enough that simple coping strategies sufficed. That strategy still works well, of course. Yet that’s no longer enough. Far more worrisome is that libraries are barely visible on the web. Forecasting the Future of Libraries 2015. I used to think being trendy was a bad thing—a sign of someone who lacks individuality or perhaps is fickle. 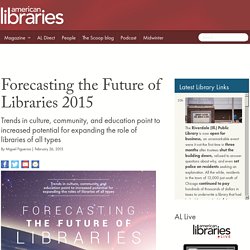 But in a world of rapid change where people are more and more aware of the latest technology, news, and innovation, being trendy—or at least knowing what’s trendy—is almost essential. In 2013, the American Library Association (ALA) an­nounced the formation of a Center for the Future of Libraries. The project, initially supported by a grant from the Institute of Museum and Library Services (IMLS), focuses much of its work on identifying emerging trends relevant to the libraries, the librarians, and the communi­ties they serve.

Why trends? Well, as many of us already know, it’s nearly impossible to accurately predict the future. Many libraries and librarians have already proven their exceptional ability to spot trends and integrate them into their programs and services. This special section focuses on some of the key trends shaping libraries.