Miscellaneous - will get to it eventually

Primary and Secondary Sources Explained by Common Craft. Way back in 1703, a massive storm hit the southern coast of England. 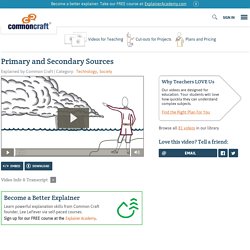 It was a hurricane known as the Great Storm and it took over 8,000 lives. Today we know quite a bit about that storm and what actually happened when it came ashore. We know so much because we have a reliable way to research and document events, places, and people who matter. Using two major kinds of sources, we can establish the facts and information that represent the most accurate version of events. Project RAISSE - University of South Carolina - College of Education. 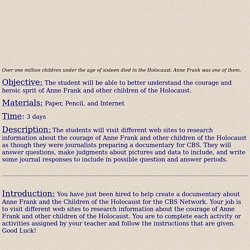 Description: The students will visit different web sites to research information about the courage of Anne Frank and other children of the Holocaust as though they were journalists preparing a documentary for CBS. They will answer questions, make judgments about pictures and data to include, and write some journal responses to include in possible question and answer periods. Jewish Community Center of Charlotte, NC - Butterfly Project. Butterfly Project Newsletter: Summer 2016 Frequently Asked QuestionsWhat is The Butterfly Project? 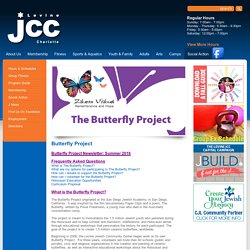 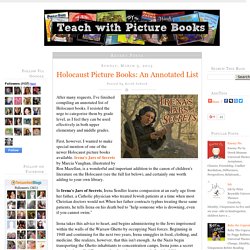 I resisted the urge to categorize them by grade level, as I feel they can be used effectively in both upper elementary and middle grades. First, however, I wanted to make special mention of one of the newer Holocaust picture books available. Irena's Jars of Secrets by Marcia Vaughan, illustrated by Ron Mazellan, is a wonderful and important addition to the canon of children's literature on the Holocaust (see the full list below), and certainly one worth adding to your own library. In Irena's Jars of Secrets, Irena Sendler learns compassion at an early age from her father, a Catholic physician who treated Jewish patients at a time when most Christian doctors would not.When her father contracts typhus treating these same patients, he tells Irena on his death bed to "help someone who is drowning, even if you cannot swim. " Student Essays Argue Holocaust Didn't Happen in Controversial California Assignment.

(Shutterstock) In April, a Rialto, California school asked 2,000 of its 8th-grade students to debate, in an essay, whether the Holocaust happened. 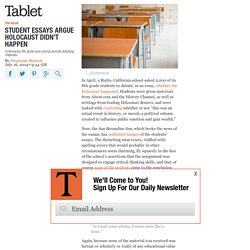 Students were given materials from About.com and the History Channel, as well as writings from leading Holocaust deniers, and were tasked with concluding whether or not “this was an actual event in history, or merely a political scheme created to influence public emotion and gain wealth.” Now, the San Bernadino Sun, which broke the news of the exams, has published images of the students’ essays. The disturbing mini-tracts, riddled with spelling errors that would probably in other circumstances seem charming, fly squarely in the face of the school’s assertions that the assignment was designed to engage critical thinking skills, and that of course none of the students came to the conclusion that the Holocaust didn’t happen. URL Shortener and Link Management Platform.

Low-Stakes Writing: Writing to Learn, Not Learning to Write. University Park Campus School (UPCS) uses low-stakes writing every day and in every subject to foster student voice, self-confidence, and critical thinking skills. Low-stakes writing is a tool to help students build comfort with sharing and developing their thoughts through writing. A defining element of low-stakes writing is how it's graded -- the grade doesn't carry a lot of weight. This removes much of the pressure from having to do the assignment a certain way, putting value instead on student thought, expression, and learning, rather than punctuation, grammar, or getting a correct answer the first time. "The most important thing about it for me is that it's not censored, and it's not too highly structured," explains James Kobialka, a UPCS seventh-grade science teacher. 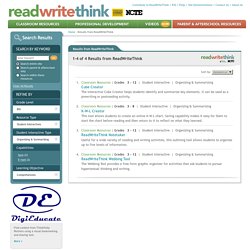 More Your students can save their work with Student Interactives. More. SLJ’s 2014 Spending Survey: Savvy Librarians Are Doing More with Less. Illustrations by David Flaherty. 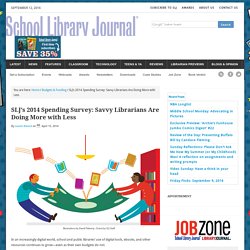 Charts by SLJ Staff. In an increasingly digital world, school and public libraries’ use of digital tools, ebooks, and other resources continues to grow—even as their own budgets do not. Reviews & Age Ratings - Best Movies, Books, Apps, Games for Kids. The world's largest reviewer of books, multimedia, and technology for children and teens. ESSA—and Federal Support of School Libraries—Signed Into Law. President Obama has signed S. 1177, the Every Student Succeeds Act (ESSA, the latest rewrite of the long-standing Elementary and Secondary Education Act, ESEA). 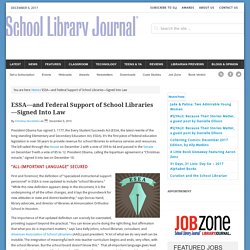 It’s the first piece of federal education legislation in over 50 years to provide revenue for school libraries to enhance services and resources. The bill sailed through the House on December 2 with a vote of 359 to 64 and passed in the Senate on December 9 with a vote of 85 to 12. President Obama, calling the bipartisan agreement a “Christmas miracle,” signed it into law on December 10. “All-important language” secured.