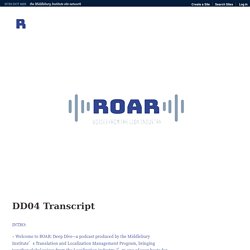 I’m one of your hosts for this episode, Rebecca Guttentag. Localization case study: Cooking Diary. Our work with MYTONA began gradually—we started with small projects to demonstrate our capabilities. 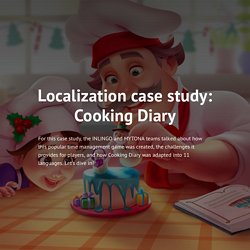 In time, they began to entrust us with new language pairs: first European languages, and then Asian ones. During the first year, we received a lot of corrective feedback, but the longer we worked together the better we understood each other—the number of corrections decreased considerably, and we began to concentrate on development work. The early days of working with MYTONA were an anxious time. Every morning I got up and went through the project correspondence several times to ensure everything was under control.

When the process settled down, the anxiety disappeared, and now I feel only optimism and pride in what we have achieved together. “Puns are the worst”, and other harsh lessons in game localisation. In the beginning was the word – and it was poorly translated. 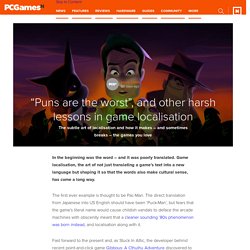 Game localisation, the art of not just translating a game’s text into a new language but shaping it so that the words also make cultural sense, has come a long way. The first ever example is thought to be Pac-Man. The bizarre, true story of Metal Gear Solid’s English translation. Localization as User Experience, and How Global Tech Companies Ruin It. Though I’m a native Russian speaker, my iPhone, Facebook, Instagram and many other apps are in English. 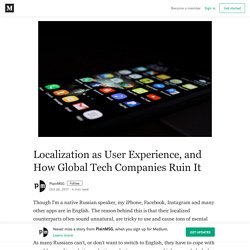 The reason behind this is that their localized counterparts often sound unnatural, are tricky to use and cause tons of mental friction. As many Russians can’t, or don’t want to switch to English, they have to cope with word-by-word translation, robotic marketing messages and inhumane helpdesks. Dragon Quest XI, el reto de localizar un videojuego y hacerlo con éxito - PS4, PC. Peak flag: The decline of flags on websites has begun - Global by Design. Game Localization and Nintendo of America’s Content Policies in the 1990s (NSFW) « Legends of Localization. In my articles and books, I’m always mentioning how Nintendo of America didn’t allow certain types of content in games during the 1990s – things like death, religious content, and stuff like that. 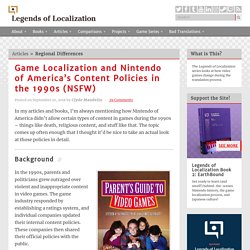 The topic comes up often enough that I thought it’d be nice to take an actual look at those policies in detail. Background In the 1990s, parents and politicians grew outraged over violent and inappropriate content in video games. The game industry responded by establishing a ratings system, and individual companies updated their internal content policies. These companies then shared their official policies with the public. Spike Chunsoft Talks Localization With 428: Shibuya Scramble And Its Complex Story. By Sato . 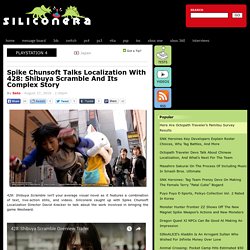 August 27, 2018 . 1:00pm 428: Shibuya Scramble isn’t your average visual novel as it features a combination of text, live-action stills, and videos. Siliconera caught up with Spike Chunsoft Localization Director David Kracker to talk about the work involved in bringing the game Westward. Siliconera: How would you explain 428: Shibuya Scramble? David Kracker, Localization Director: The game is a mystery adventure set in real-life Shibuya with branching paths. Found in Translation - Witcher Documentary. Why Electronic Arts Localizes Using Freelance Translators ‘Wherever Possible‘ Thoughts about the complex G-localization triangle when creating video games for India... — In 2016, global gaming industry clocked up to $100 billion in revenues, but India’s estimated share of $543 million. 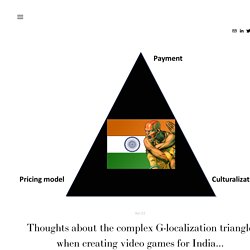 And if we compared to other countries, for example, Korea, Japan …. India appears to have a modest impact on the overall industry growth. However, the opportunity in this market is huge. India is a huge potential market! Steps for Effective Localization. RØDE Microphones - The Voice Over Story behind Battlefield – An Interview With Tomas Danko. When a gamer plays EA's platinum selling Battlefield title, they will often remember and enjoy the sounds of numerous weapons and vehicles, but of course great sounding voices from clean recordings also make the game shine. 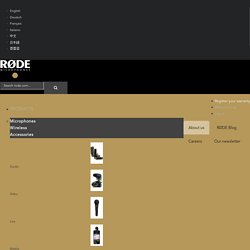 In fact, Battlefield has a huge array of characteristic voices! With the recent large budget allocated for higher caliber sessions, incredible actors were hired for the latest series. Unlike recording for singing or broadcasting, the days of using traditional ultra-expensive microphones and other gear are starting to shift. Japan Localization. You may have heard – Shovel knight has finally made his way across the ocean to Japan! 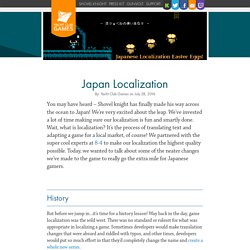 We’re very excited about the leap. We’ve invested a lot of time making sure our localization is fun and smartly done. Wait, what is localization? It’s the process of translating text and adapting a game for a local market, of course! We partnered with the super cool experts at 8-4 to make our localization the highest quality possible. History. Tokyo Mirage Sessions #FE Developers On Adapting To The West And Its Localization. By Sato . 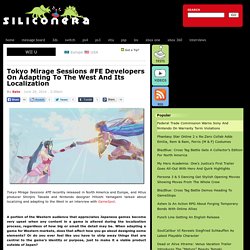 June 29, 2016 . 2:00am Tokyo Mirage Sessions #FE recently released in North America and Europe, and Atlus producer Shinjiro Takada and Nintendo designer Hitoshi Yamagami talked about localizing and adapting to the West in an interview with GameSpot. A portion of the Western audience that appreciates Japanese games become very upset when any content in a game is altered during the localization process, regardless of how big or small the detail may be. When adapting a game for Western markets, does that affect how you go about designing some elements? Or do you ever feel like you have to strip away things that are central to the game’s identity or purpose, just to make it a viable product outside of Japan? Hitoshi Yamagami: Each country has its unique culture and taste. From among the various complex tastes of people worldwide, the developer selects settings and characters that appeal to as many people as possible. Interview: Brian Gray on localizing Gotta Protectors.

Brian Gray is a veteran of the localization industry, working on big franchises such as Kingdom Hearts and Fire Emblem, cult favorites like The World Ends with You and Jeanne d’Arc and recent releases like Xenoblade Chronicles X and Azure Striker Gunvolt.

Need <a href=" Case Study Help online </a>? Essaygator is solution for your problem. Tab: – bensonjennifer

We talked with him about his latest project: Gotta Protectors, a 3DS eShop release from composer Yuzo Koshiro’s studio, Ancient. Graham Russell, Michibiku: Thanks for talking to us, Brian! To start, could you talk a bit about your history in games localization and your involvement with Gotta Protectors? "Make it Biblical:" How Vagrant Story Changed Game Localization. Shaping Game Lore through Localization - J-En Translations. Many translators, when hired for a job, will translate the text given to them. How Atlus fails fans of Persona 5. How Three Kids With No Experience Beat Square And Translated Final Fantasy V Into English. Vagrant Story's Localizers Dispel Myths About the Script in New Interview. Persona 5 deserved better: a translator's take on a subpar script. It's hard to say where the localization of Persona 5 went wrong. The game itself is sleek and meticulously polished, from the gameplay to the menu UI. Dungeons are a blast to explore, battles are satisfying right down to the results screen and the plot packs many emotional punches.

These individual features all blend together to make a game that feels effortlessly cool. Li Ting Liu's Blog - Detention Postmortem: Localizing a Taiwanese game for Western audiences. The following blog post, unless otherwise noted, was written by a member of Gamasutra’s community. The thoughts and opinions expressed are those of the writer and not Gamasutra or its parent company. In one ordinary black Friday on January 13, 2017, our debut title 2D psychological horror game Detention was launched on Steam. Waking up to localization. How Bungie localized Destiny for the world. Gumi Team's Blog - Developer Diary #4: Birth of the Global Version 3 - Q&A with the Localization Team. Monster Hunter: World Directors On Coming Up With Monster Names And Localizing Them. By Sato . April 3, 2018 . 1:00pm Monster Hunter: World Executive Director and Art Director Kaname Fujioka and Director Yuya Tokuda recently shared their process on coming up with monster names and how its gets localized in an interview with Dengeki.

Q&A: Translating the humor & tone of Yakuza games for the West. Talking localization with Yakuza localization producers Scott Strichart and Sam Mullen. For years now, I’ve been a huge fan of the Yakuza series. The first title I played was Yakuza 3 back in 2011 and it took me by complete surprise. It was basically everything I had ever wanted out of a video game, right down to kooky characters and gut-wrenching action moments. Nintendo Treehouse Log - Localizing “Jump Up, Super Star!” Found in Translation - Witcher Documentary.