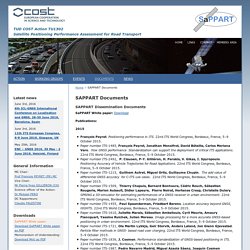 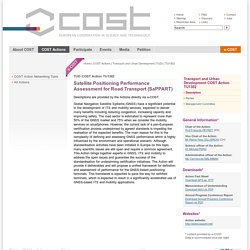 Global Navigation Satellite Systems (GNSS) have a significant potential in the development of ITS and mobility services, expected to deliver many benefits including reducing congestion, increasing capacity and improving safety. The road sector is estimated to represent more than 50% of the GNSS market and 75% when we consider the mobility services on smartphones. However, the current lack of a pan-European certification process underpinned by agreed standards is impeding the realisation of the expected benefits. The main reason for this is the complexity of defining and assessing GNSS performance which is highly influenced by the environment and operational scenario. Although standardisation activities have been initiated in Europe on this topic, many scientific issues are still open and require a common agreement. Websites* Shanti: Home. Is GPS ruining our ability to navigate for ourselves? 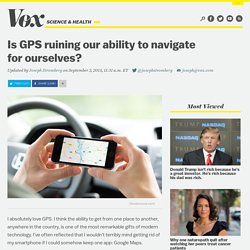 I think the ability to get from one place to another, anywhere in the country, is one of the most remarkable gifts of modern technology. I've often reflected that I wouldn't terribly mind getting rid of my smartphone if I could somehow keep one app: Google Maps. Why Do We Blindly Follow Our GPS? - Geolounge. Ad Most people would agree that technology has made modern life more convenient and comfortable. 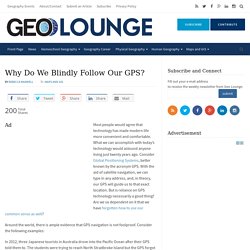 What we can accomplish with today’s technology would astound anyone living just twenty years ago. Consider Global Positioning Systems, better known by the acronym GPS. With the aid of satellite navigation, we can type in any address, and, in theory, our GPS will guide us to that exact location. But is reliance on GPS technology necessarily a good thing? Around the world, there is ample evidence that GPS navigation is not foolproof. In 2012, three Japanese tourists in Australia drove into the Pacific Ocean after their GPS told them to.

A group of Belgian tourists set out for a skiing vacation in the French Alps at a resort called La Plagne. Hacking A Phone's GPS May Have Just Got Easier. Multiday GPS Travel Behavior Data for Travel Analysis. GNSS Market Report 2015: Exciting Times for European GNSS. A new Market Report from the GSA delves into the market opportunities, technology trends and future developments of GNSS, as well as how GNSS contributes to Europe’s economy. 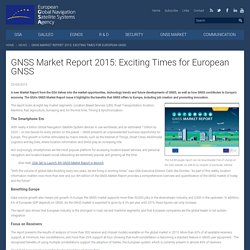 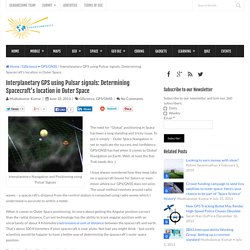 To put it simply – Outer Space Navigation is yet to replicate the success and confidence GPS/GNSS has had when it comes to Global Navigation on Earth. 10 Common GPS Myths. GPS has been around since the 80s, but even today a lot of people don’t really understand how it works, and there are tons of myths floating around that are just not true. 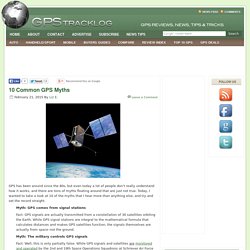 Today, I wanted to take a look at 10 of the myths that I hear more than anything else, and try and set the record straight. Myth: GPS comes from signal stations Fact: GPS signals are actually transmitted from a constellation of 30 satellites orbiting the Earth. While GPS signal stations are integral to the mathematical formula that calculates distances and makes GPS satellites function, the signals themselves are actually from space–not the ground. GPS Skyplot. From GPS and Google Maps to Spatial Computing. From Google Maps to consumer global positioning system (GPS) devices, spatial technology shapes many lives in both ordinary and extraordinary ways. 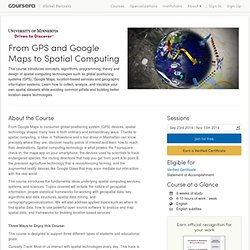 Thanks to spatial computing, a hiker in Yellowstone and a taxi driver in Manhattan can know precisely where they are, discover nearby points of interest and learn how to reach their destinations. Spatial computing technology is what powers the Foursquare check-in, the maps app on your smartphone, the devices used by scientists to track endangered species, the routing directions that help you get from point A to point B, the precision agriculture technology that is revolutionizing farming, and the augmented reality devices like Google Glass that may soon mediate our interaction with the real world. This course introduces the fundamental ideas underlying spatial computing services, systems, and sciences. Visualizing and styling a GPS track — Tutorials — CartoDB Docs. GPS – a quick guide. Hey all, just found this on EarthMeasurement.com & it is a great read, hope you find it useful! 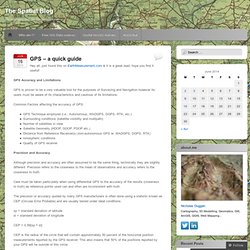 GPS Accuracy and Limitations GPS is proven to be a very valuable tool for the purposes of Surveying and Navigation however its users must be aware of its characteristics and cautious of its limitations. Common Factors affecting the accuracy of GPS: GPS Technique employed (i.e.: Autonomous, WADGPS, DGPS, RTK, etc.)Surrounding conditions (satellite visibility and multipath)Number of satellites in viewSatellite Geometry (HDOP, GDOP, PDOP etc.)Distance from Reference Receiver(s) (non-autonomous GPS ie: WADGPS, DGPS, RTK)Ionospheric conditionsQuality of GPS receiver.

GNSS Shadow Matching: Improving GNSS positioning in Urban Canyons. In the era of smartphones and smart devices, navigation in urban areas still remains a gray area where position accuracies (of around 5m) can be frustrating and misleading. 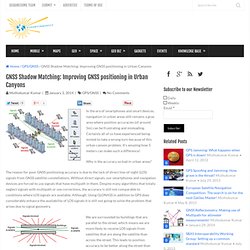 Certainly all of us have experienced being misled to take a wrong turn because of this urban canyon problem. It’s amazing how 5 meters can make such a difference! Why is the accuracy so bad in urban areas? The reason for poor GNSS positioning accuracy is due to the lack of direct line-of-sight (LOS) signals from GNSS satellite constellations. Without direct signals, our smartphones and navigation devices are forced to use signals that have multipath in them. We are surrounded by buildings that are parallel to the street, which means we are more likely to receive LOS signals from satellites that are along the satellite than across the street. Principles of the Global Positioning System. Do our brains pay a price for GPS? - Ideas. Les accéléromètres de smartphones, futurs outils de gestion urbaine ? L'utilisation de l'accéléromètre inscrit dans la dernière génération de smartphone rend possible la cartographie des véhicules et moyens de transports utilisés par les individus.

Gaming. Question matérielle. Do our brains pay a price for GPS? - Ideas. Tile. Retail Stores Are Tracking You Like Crazy ⚙ Co. The key to Amazon’s success has been its “users also bought” follow-up service made possible by the accumulation of shopper data--and now, retail stores are trying to beat Amazon at its own game. Using various techniques, from smartphone Wi-Fi signal tracking to security camera facial analysis, department stores are keeping tabs on customer movement and habits to gauge and improve customer experience. This can be as simple as improving the layout for customer flow or combining movement data with cameras to gauge customer moods--and offer products to match.

A lot of positioning companies in the recent history have been trying to penetrate the indoor positioning market using WiFi, Cell Towers and many more “out-of-the-box” ideas. A First-Hand Look at Smithsonian’s New Exhibit That Links Time and Navigation. Smithsonian staff prepare Ramsden sextant for mounting at Time and Navigation exhibit. Photo by Dee Ann Divis (Click image to enlarge.) Plans for the 100th anniversary of Einstein's relativity theory gave museum curators the storyline for the new exhibit April 12, 2013 Share via:

DIY Drones. Méthodologie - SMOOTH. Would You Put a Tracking Device on Your Child? What’s your “lost in the grocery store” story? Everyone has one. The day you lost sight of your mother while gaping at the candy selection at Albertsons, or were tempted away by the lure of the museum gift shop, only to discover that your family had apparently gone the way of the dinosaurs and was nowhere to be seen.