Drawn Outsider: Shaun Tan profile. Between words and images, illustrator/writer Shaun Tan has found a place for himself and scored some serious awards. 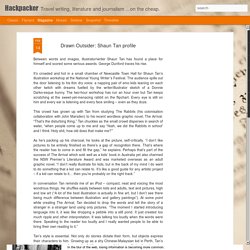 George Dunford traces his rise. It’s crowded and hot in a small chamber of Newcastle Town Hall for Shaun Tan’s illustration workshop at the National Young Writer’s Festival. The audience spills out the door listening to his thin dry voice: a napping pair of emo kids leaning on each other twitch with dreams fuelled by the writer/illustrator sketch of a Donnie Darko-esque bunny. The two-hour workshop has run an hour over but Tan keeps scratching at the sweet-yet-menacing rabbit on the flipchart. Shaun Tan's Biography. Shaun Tan grew up in the northern suburbs of Perth, Western Australia. 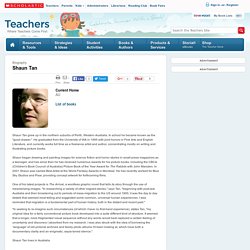 In school he became known as the "good drawer. " He graduated from the University of WA in 1995 with joint honors in Fine Arts and English Literature, and currently works full time as a freelance artist and author, concentrating mostly on writing and illustrating picture books.Shaun began drawing and painting images for science fiction and horror stories in small-press magazines as a teenager, and has since then he has received numerous awards for his picture books, including the CBCA (Children's Book Council of Australia) Picture Book of the Year Award for The Rabbits with John Marsden. In 2001 Shaun was named Best Artist at the World Fantasy Awards in Montreal. He has recently worked for Blue Sky Studios and Pixar, providing concept artwork for forthcoming films.One of his latest projects is The Arrival, a wordless graphic novel that tells its story through the use of mesmerizing images.

The Brothers Grimm in Three Transcendent Dimensions: Shaun Tan’s Breathtaking Sculptural Illustrations for the Beloved Tales. In his magnificent meditation on fairy tales and the psychology of fantasy, J.R.R. 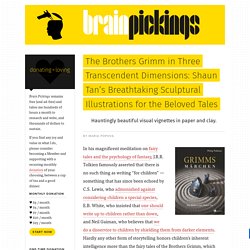 Tolkien famously asserted that there is no such thing as writing “for children” — something that has since been echoed by C.S. Lewis, who admonished against considering children a special species, E.B. White, who insisted that one should write up to children rather than down, and Neil Gaiman, who believes that we do a disservice to children by shielding them from darker elements. Hardly any other form of storytelling honors children’s inherent intelligence more than the fairy tales of the Brothers Grimm, which have been extending a luminous invitation into the dark for more than two centuries. 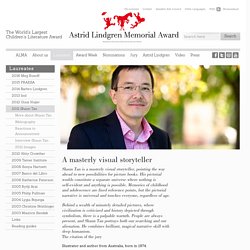 Shaun Tan has illustrated more than 20 books, notable among them The Rabbits (1998), The Lost Thing (2000), The Red Tree (2001), The Arrival (2006) and Tales from Outer Suburbia (2008). Shaun Tan has reinvented the picture book by creating visually spectacular pictorial narratives with a constant human presence. He uses a variety of means of artistic expression: lead pencil, Indian ink, coloured pencil, painting and various print techniques. Shaun Tan - a small collection - Right NowHuman Rights in Australia. A short film based on the book by Shaun Tan. The magical thinking of Shaun Tan's Rules of Summer. Rules of Summer appeared in the autumn of 2013, but the story of my relationship with this remarkable book doesn’t start until the following year. 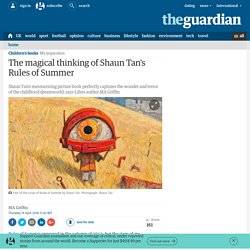 Manchester’s Central Library had just re-opened after a £50 million refurbishment and one sunny morning that spring I rode the tram to St Peter’s Square with my wife and three-year-old daughter. There’s room enough to borrow six books on a kid’s library card and I was scheming; the little girl was getting five, I figured, and I was having one. I’d always loved Edward Gorey and when I saw Rules of Summer by Shaun Tan that morning, (the lack of article is important by the way – these are only one of many possible lists of weird childhood regulations) I was immediately mesmerised. I bought my own copy, and as I busied myself writing my second novel, Lifers, through that spring and summer, Tan’s book became a sort of bible for everything I was trying to achieve. Let me try and describe it. Why does Rules of Summer cast such a strong spell? An Interview with Shaun Tan. Mitchell Jordan features An Interview with Shaun Tan There aren't many artists who have the ability to both write and illustrate their own work; but Shaun Tan is an exception. 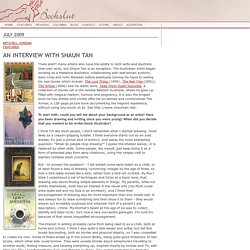 The Australian artist began working as a freelance illustrator, collaborating with well-known authors, Gary Crew and John Marsden before eventually turning his hand to writing his own books which include: The Lost Thing (1999); The Red Tree (2001); The Arrival (2006) and his latest work, Tales From Outer Suburbia, a collection of stories set in the remote Western Australia, where he grew up. Filled with magical realism, humour and poignancy, it is also the longest book he has written and comes after his acclaimed and controversial The Arrival, a 128-page picture book documenting the migrant experience, without using any words at all. To start with, could you tell me about your background as an artist? I think I'm like most people, I don't remember when I started drawing: most likely as a crayon-gripping toddler. In conversation: Neil Gaiman talks to Shaun Tan.

I met Shaun Tan for the first time in 1996, at a science-fiction convention in Perth, and only half-remember meeting him. 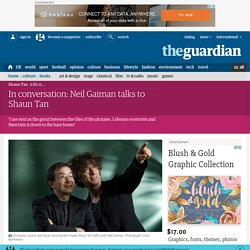 He's quiet, shy, generally unassuming. I got to know him slightly better with each subsequent trip to Australia, and he got used to me introducing myself to him and him telling me that actually we'd already met. Shaun Tan’s Wild Imagination. Photo A vine has invaded Shaun Tan’s house in suburban Melbourne, Australia, through a previously unnoticed gap where the window of his studio doesn’t quite meet the sill. 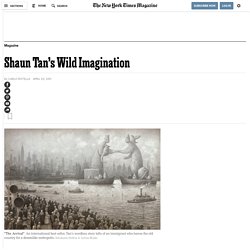 Advancing along a curtain rod and sinking offshoots into the dark places behind his desk, the vine has overgrown Tan’s workspace. He has to trim it back, because it keeps trying to grab things — an electric pencil sharpener, unopened letters in his inbox. Recently he returned from a trip to find that it was exploring the bottom drawer of his filing cabinet, where he keeps new projects. The Bird King. Home. Shaun Tan. Tan was born in Fremantle, Western Australia, in 1974 and grew up in the northern suburbs of Perth, Western Australia. 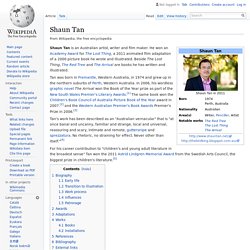 In 2006, his wordless graphic novel The Arrival won the Book of the Year prize as part of the New South Wales Premier's Literary Awards.[1] The same book won the Children's Book Council of Australia Picture Book of the Year award in 2007.[2] and the Western Australian Premier's Book Awards Premier's Prize in 2006.[3] Tan's work has been described as an "Australian vernacular" that is "at once banal and uncanny, familiar and strange, local and universal, reassuring and scary, intimate and remote, guttersnipe and sprezzatura. No rhetoric, no straining for effect. Never other than itself. For his career contribution to "children's and young adult literature in the broadest sense" Tan won the 2011 Astrid Lindgren Memorial Award from the Swedish Arts Council, the biggest prize in children's literature.[5] Biography[edit] Early life[edit] Transition to illustration[edit] L. 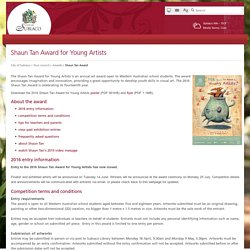 Finalist and exhibited artists will be announced on Tuesday 14 June. Winners will be announced at the award ceremony on Monday 25 July. Competition details and announcements will be communicated with entrants via email, or please check back to this webpage for updates. Competition terms and conditions Entry requirements The award is open to all Western Australian school students aged between five and eighteen years. Entries may be accepted from individuals or teachers on behalf of students. Submission of artworksEntries may be submitted in person or via post to Subiaco Library between Monday 18 April, 9.30am and Monday 9 May, 5.30pm.