How to Explain Mansplaining. Photo SYDNEY, Australia — It was on a recent trip to Indonesia that, as a male bureaucrat sounded forth on a vast span of subjects without being asked to do so, I realized that the English language was in need of a new addition: the manologue. 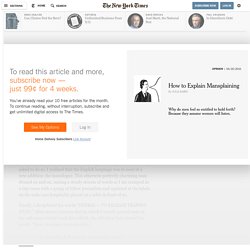 This otherwise perfectly charming man droned on and on, issuing a steady stream of words as I sat cramped in a tiny room with a group of fellow journalists and squinted at the labels on the soda cans hospitably placed on a table in front of us. Finally, I deciphered the words “HERBAL — TO RELEASE TRAPPED WIND.” After several minutes during which I silently prayed none of my colleagues would reach for a drink, the official at last uttered the words, “Now, to answer your question.” So why did we get so many words between the question asked and the answer given? Above all, why do so many men do this? Gender stereotypes easing more for girls than boys. Why it's not sexist to say boys should never play with dolls. Adult women are now the largest demographic in gaming.

Congratulations, gamer girls—you're officially at the top of the food chain when it comes to games. 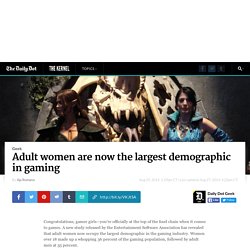 A new study released by the Entertainment Software Association has revealed that adult women now occupy the largest demographic in the gaming industry. Women over 18 made up a whopping 36 percent of the gaming population, followed by adult men at 35 percent. Teenage boys, who are often stereotyped as the biggest gamers, now lag far behind their older female counterparts, making up just 17 percent of the gaming demographic.

The picture that emerges from the study is one of expansion across the board. More people are playing more games of various genres across more platforms, with social games on mobile and casual games on PCs emerging as huge leaders. According to the study, last year saw a significant boom in women over 50—their numbers jumped by a whopping 32 percent between 2012 and 2013. Sorry, male gamers of Reddit and 4Chan, but Angry Birds only came out five years ago. Christina Hoff Sommers: School Has Become Hostile to Boys. As school begins in the coming weeks, parents of boys should ask themselves a question: Is my son really welcome? 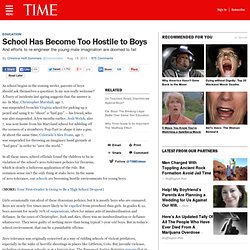 A flurry of incidents last spring suggests that the answer is no. In May, Christopher Marshall, age 7, was suspended from his Virginia school for picking up a pencil and using it to “shoot” a “bad guy” — his friend, who was also suspended. A few months earlier, Josh Welch, also 7, was sent home from his Maryland school for nibbling off the corners of a strawberry Pop-Tart to shape it into a gun. At about the same time, Colorado’s Alex Evans, age 7, was suspended for throwing an imaginary hand grenade at “bad guys” in order to “save the world.”

Pink v blue - are children born with gender preferences? The Times and FT report today (£) that Hamleys, is ditching its separate floors for boys and girls along with their pink and blue signs and replacing them with signs that simply state the types of toys sold. 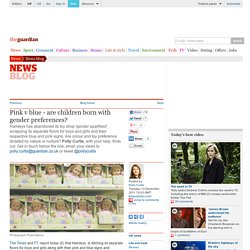 The Times story says: Hamleys, the country's most famous toy store, has abandoned its traditional separate floors for boys and girls after a campaign on Twitter accused it of operating "gender apartheid". New signs in the store now state what type of toys are sold on each floor, rather than suggesting who should play with them.The campaign was started by Laura Nelson, a political blogger who writes under the name "Delilah" and who trained as a neuroscientist.

She believes that young children's development can be limited if they play with only one sort of toy. The Lolita Effect (Lessons for Girls series) What do you think of thongs for 10-year-olds with slogans like “eye candy”? 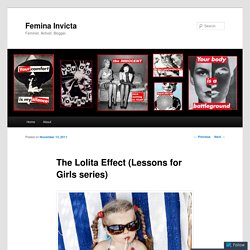 Underwear for teens with “Who needs credit cards…?” Written across the crotch? Irish Times Parenting Q&A with Dr. John Sharry: 'Is there a difference in bringing up boys and girls?' Q. 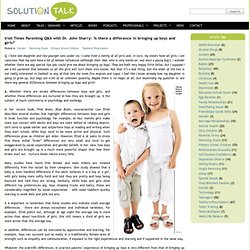 I have one daughter and two younger sons under six. I come from a family of all girls and, in turn, my sisters have all girls. I am conscious that my sons have a lot of female influences (although their dad, who is very hands-on, was once a young boy!). I wonder whether there are any special tips you could give me about bringing up boys. They are both very happy little fellas, but I suppose I am a bit paranoid that between us all the girls will turn them into sissies. Brain development: Is the difference between boys and girls all in their heads? Page 3 of 3 Do girls and boys think differently? 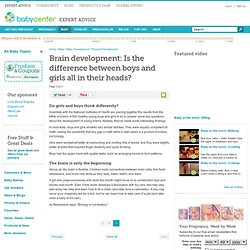 Scientists with the National Institutes of Health are piecing together the results from the MRIs of brains of 500 healthy young boys and girls to try to answer some key questions about the development of young brains. Already, they've made some interesting findings: In most tests, boys and girls showed very similar abilities. They were equally competent at math, raising the possibility that any gap in math skills in later years is a product of culture, not biology. Girls were somewhat better at memorizing and reciting lists of words, and they were slightly better at tasks that required finger dexterity and quick thinking. Boys had the upper hand with spatial tasks, such as arranging blocks to form patterns.

The brain is only the beginning Above all, the brain is flexible. A girl who plays exclusively with dolls this month might move on to construction toys and blocks next month. As Berenbaum says, "Biology is not destiny. " Lego Introduces Girls' Range of Blocks. In a 1970s advertisement for Lego, a small girl holds up a free-form construction, made up of a jumble of different types of bricks and figures. 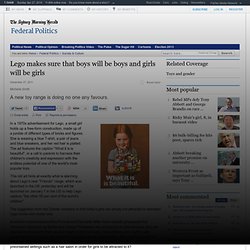 She is wearing a blue T-shirt, a pair of jeans and blue sneakers, and her red hair is plaited. The ad features the caption ''What it is is beautiful'', in a call to parents to harness their children's creativity and expression with the endless potential of one of the world's most popular toys. This old ad hints at exactly what is alarming about Lego's new ''Friends'' range, which was launched in the UK yesterday and will be launched on January 1 in the US to help Lego capture ''the other 50 per cent of the world's children''. The suggestion from the Danish company is that today's girls are simply not attracted to standard Lego bricks and model sets.