Crazy paving: Rotterdam to consider trialling plastic roads. The Netherlands could become the first country in the world where the streets are paved with plastic bottles after Rotterdam city council said it was considering piloting a new type of road surface touted by its creators as a greener alternative to asphalt. 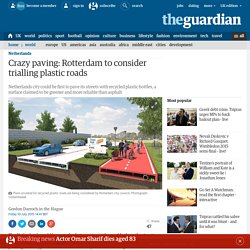 Construction firm VolkerWessels unveiled plans on Friday for a surface made entirely from recycled plastic, which it said required less maintenance than asphalt and could withstand more extreme temperatures of between minus 40C and 80C. When was the first Passive House built? 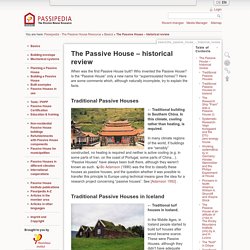 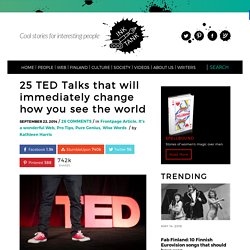 Learn as if you were to live forever.” If this sounds like a philosophy you can relate to, then you’ll love TED talks. Watch an android dream of electric sheep (and other weird things) – live. Remember those amazing images from last week that looked like a computer having an acid trip? 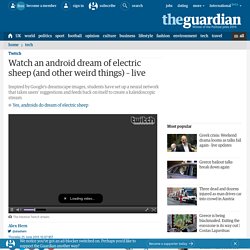 What if you could watch them live? A group of PhD students from Belgium have created a Twitch livestream which lets viewers look in to the mind of a neural network as it “dreams”. The livestream builds on research published by Google last week, when the search firm demonstrated a method of using an image recognition algorithm to generate images, as well as simply categorising them.

'At some point we will have no one coming into the construction industry' Abby Shorter is beaming. 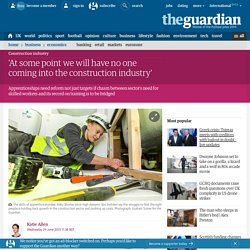 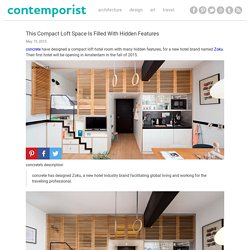 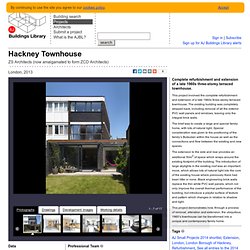 This project involved the complete refurbishment and extension of a late 1960s three-storey terraced townhouse. The existing building was completely stripped back, including removal of all the exterior PVC wall panels and windows, leaving only the integral brick walls. The brief was to create a large and special family home, with lots of natural light. Special consideration was given to the positioning of the family’s Butsudan within the house as well as the connections and flow between the existing and new spaces.

The extension to the side and rear provides an additional 50m2 of space which wraps around the existing footprint of the building. AJBL - Westbourne Drive - NORD architecture. Extensive local study and consultation with the Planning Authority resulted in a subtle but significant shift in the application of planning guidelines, allowing for an extension which is neither set back nor down from the original building. 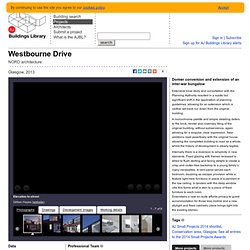 A monochrome palette and simple detailing defers to the brick, render and rosemary tiling of the original building, without subservience, again allowing for a singular, clear expression. New additions read assertively with the original house allowing the completed building to read as a whole, whilst the history of development is clearly legible. Internally there is a reversion to simplicity in new elements.

Fixed glazing with frames recessed is allied to flush skirting and facing details to create a crisp and clutter-free backdrop to a young family’s many necessities. Architecture to the rescue: the world's greenest projects – in pictures. 7 Mind-Bending Bent Bamboo Structures. Though bamboo as a building material carries connotations of ancient Asiatic architecture, the widely available wood is enjoying a resurgence in experimental design. 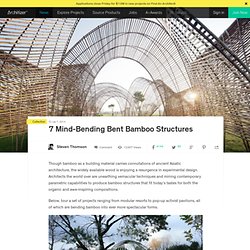 Architects the world over are unearthing vernacular techniques and mining contemporary parametric capabilities to produce bamboo structures that fit today’s tastes for both the organic and awe-inspiring compositions. Below, tour a set of projects ranging from modular resorts to pop-up activist pavilions, all of which are bending bamboo into ever more spectacular forms. Add To Collection Save this image to a collection. 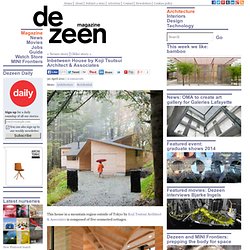 Update: this project is included in Dezeen Book of Ideas, which is on sale now for £12. Captions are from Peter Zumthor. Above photo by Walter Mair. Above: Brother Klaus Field Chapel, 2007 Wachendorf, Eifel, Germany. nTEXT: Individuality Through Diversity: An Evaluation of the Work of Peter Zumthor. Evaluating a particular work of the built environment is traditionally done using the three most basic forms of architectural drawing: the plan, the section, and the elevation. For Peter Zumthor, however, architecture is seen and designed according to its atmospheric qualities, always of an emotional sensibility and rarely quantifiable.

According to the Swiss architect, atmosphere is the aesthetic quality par excellence which guides the design process by recreating the intensity of a mood found in memory. Zumthor was born in 1943 into a war torn Europe. Bishop Edward King Chapel, Oxford. The practice was commissioned to design a new chapel for Ripon Theological College in Cuddesdon, after winning an RIBA competition in 2009. The clients for the project were the college itself and a small community of nuns resident on the site, the Sisters of Begbroke. The project encapsulates two architectural images. Rural Design Architects - Isle of Skye and the Highlands and Islands. Images. Architectum's Photostream. Untitled. Twig & Thistle » Blog Archive » Watercolors by Andrea D’Aquino. Google Image Result for. The 33 Most Beautiful Abandoned Places In The World.

GLULAM DETAIL. Pursuing Wabi. “Experiment” is not something you want to hear when building your house. I’m not sure what I thought when the architect told me he would like to “experiment” with the exterior siding material. But what he proposed was compelling enough to give it a shot. The exterior siding will be shou-sugi-ban (焼杉板), or burnt sugi boards. Sugi is known as Japanese Cedar, but its really a cypress not a cedar. Instead of sugi, our sidings are western cedar. This weekend the siding for our house was burnt. Project details. Commission. Hardwoods Project - 21. Dwelle. : high quality, zero-carbon, prefabricated eco-buildings. Vineet kaur. Vineet kaur. On Site, On Schedule and On Trend! Tea and tap Wife had first go at making tea with the tap, but ended up with it ‘not quite hot enough’.