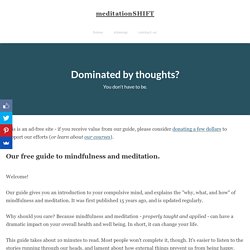 Welcome! Our guide gives you an introduction to your compulsive mind, and explains the "why, what, and how" of mindfulness and meditation. It was first published 15 years ago, and is updated regularly.Why should you care? Because mindfulness and meditation - properly taught and applied - can have a dramatic impact on your overall health and well being. The psychology behind religious belief. Throughout history, scholars and researchers have tried to identify the one key reason that people are attracted to religion. 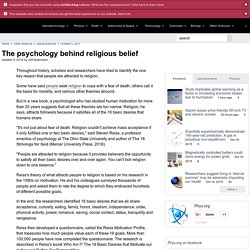 Some have said people seek religion to cope with a fear of death, others call it the basis for morality, and various other theories abound. But in a new book, a psychologist who has studied human motivation for more than 20 years suggests that all these theories are too narrow. Religion, he says, attracts followers because it satisfies all of the 16 basic desires that humans share. How To Be A Better Man - 100 Plus Ways To Take Charge. Turn your weakness into greatness; re-create yourself as a gentleman. 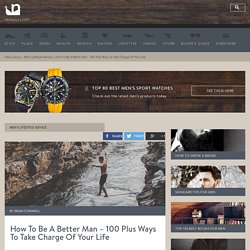 Forge a character even that man’s biggest critic can respect: Himself. People with higher 'intellectual arrogance' get better grades, study finds. People who think they know it all — or at least, a lot — may be on to something, according to a Baylor University study. 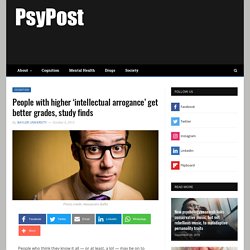 The finding was a surprise to researchers at Baylor and the University of Mary Hardin-Baylor, who had theorized that “intellectual humility” — having an accurate or moderate view of one’s intelligence and being open to criticism and ideas — would correlate with grades. But being full of oneself when it came to rating one’s intellectual arrogance — an exaggerated view of intellectual ability and knowledge — instead generally predicted academic achievement, especially on individual course work, according to the study. The research — “Contrasting self-report and consensus ratings of intellectual humility and arrogance” — is published in the Journal of Research in Personality and funded by a grant from The John Templeton Foundation.

The findings have implications for education, the workplace and scientific research, scholars said. The study also revealed that: Random cool gifs. Random cool gifs. Manipulation techniques used by manipulative people. UPDATE 9/20/15: It has come to my attention that this was posted on reddit and 50,000 people have visited this post as a result. 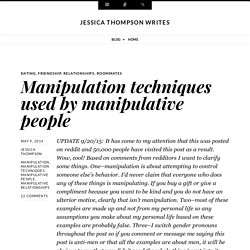 Wow, cool! Based on comments from redditors I want to clarify some things. One–manipulation is about attempting to control someone else’s behavior. BpbIS4c. Psychologists Have Uncovered a Troubling Feature of People Who Seem Nice All the Time. This week, a Texas mother pointed out that a high school geography textbook was painting a misleading picture of slavery — and the publisher acknowledged she was right and immediately moved to correct the text. 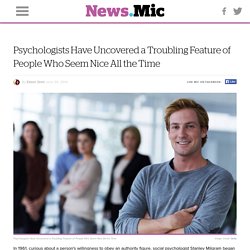 Mother Roni Dean-Burren was surprised to learn McGraw Hill Education's ninth-grade textbook World Geography seemingly lacked any reference to the brutal conditions endured by black people captured and sold in the Atlantic slave trade, BuzzFeed reports. Her concerns were subsequently mirrored by tens of thousands of Facebook users. The questionable section of the textbook, titled "Patterns of Immigration," reads "The Atlantic slave trade between the 1500s and the 1800s brought millions of workers from Africa to the southern United States to work on agricultural plantations.

" 20 Cognitive Biases. JqVXVGU. The Emotions That Make Us More Creative and Innovative. The organizational and cultural bias in most enterprises favors the positive: it's solutions-oriented, it's upbeat, it makes colleagues feel better. 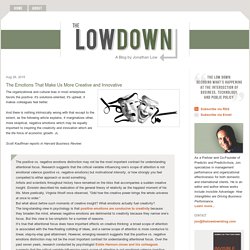 And there is nothing intrinsically wrong with that except to the extent, as the following article explains, it marginalizes other, more skeptical, negative emotions which may be equally important to inspiring the creativity and innovation which are the life force of economic growth. JL Scott Kauffman reports in Harvard Business Review: The positive vs. negative emotions distinction may not be the most important contrast for understanding attentional focus. Research suggests that the critical variable influencing one’s scope of attention is not emotional valence (positive vs. negative emotions) but motivational intensity, or how strongly you feel compelled to either approach or avoid something.

[Tutorial] Mixed guide to Lucid Dreaming combining multiple techniques : LucidDreaming. The Dark Side of Emotional Intelligence. Late Bloomer. The Eye Test. Soul Type Quiz from "The Instruction: Live the Life Your Soul Intended " by Ainslie MacLeod (Publisher: Sounds True) Caregiver The quintessential characteristic of a Caregiver type is the desire to take care of others. 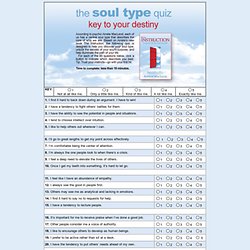 For this reason, Caregivers may be drawn to the long-term care of children or the elderly. Though some Caregivers find their need to nurture satisfied by raising a family, many others seek out work in such venues as schools, hospitals, and animal shelters. The long-term care of those with Alzheimer’s, autism, and mental illness often becomes the responsibility of Caregivers. If you recognize yourself as a Caregiver, you may already have noticed the tendency to put others’ needs ahead of your own. You Are a Newborn Soul. Results from Chakra test. The free five minute personality test! Your Existing Situation "Needs a peaceful and quiet environment. 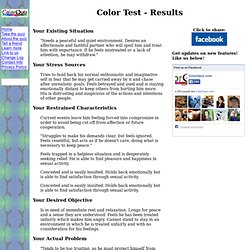 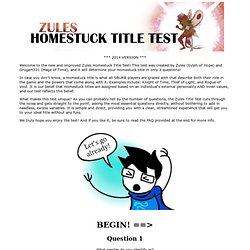 This test was created by Zules (Sylph of Hope) and Grogert331 (Mage of Time), and it will determine your Homestuck title in only 3 questions! In case you don't know, a Homestuck title is what all SBURB players are graced with that describe both their role in the game and the powers that come along with it. Examples include: Knight of Time, Thief of Light, and Rogue of Void.

It is our belief that Homestuck titles are assigned based on an individual's external personality AND inner values, and our test reflects this belief. What makes this test unique? We truly hope you enjoy the test! What gender do you identify as?