Signs you're smart — even if it doesn't feel like it. Here are some signs that you're a smart cookie. 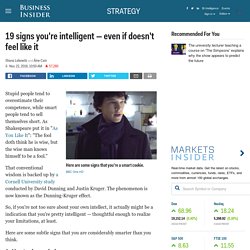 BBC One HD Stupid people tend to overestimate their competence, while smart people tend to sell themselves short. As Shakespeare put it in "As You Like It": "The fool doth think he is wise, but the wise man knows himself to be a fool. " That conventional wisdom is backed up by a Cornell University study conducted by David Dunning and Justin Kruger. The phenomenon is now known as the Dunning-Kruger effect. So, if you're not too sure about your own intellect, it actually might be a indication that you're pretty intelligent — thoughtful enough to realize your limitations, at least. Here are some subtle signs that you are considerably smarter than you think. 1. Research suggests that music helps kids' minds develop in a few ways: • A 2011 study found that scores on a test of verbal intelligence among 4- to 6-year-olds rose after only a month of music lessons. 2. 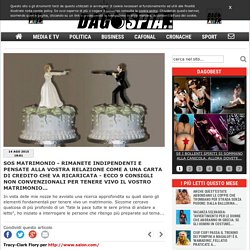 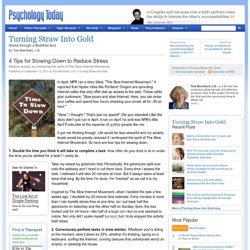 " It reported that hipster cities like Portland, Oregon are sprouting Internet cafés that only offer dial-up access to the web. These cafés give customers, "Slow pours and slow Internet. Here, you can order your coffee and spend four hours checking your email, all for .99 an hour. " "Wow," I thought. " That's just my speed! " It got me thinking though. How often do you clock in at or under the time you've allotted for a task? Take my raised ivy geranium bed. Inspired by The Slow Internet Movement, when I tackled the task a few weeks ago, I doubled my 20-minute time estimate. . This idea was inspired by a discovery I made in the 1990s when driving my '85 LTD (nicknamed The Big White Boat by my kids). Unfortunately, this doesn't work anymore because hardly anyone honors the speed limit, even in the slow lane.

Workaholism and Power. Workaholism and Power As Lord Acton warns in his letter to Bishop Creighton in 1877, “Power corrupts, and absolute power corrupts absolutely.” (1) As we listen to the misuse of power stories in the daily news and try to understand why this happens, it is wise to know more about the dynamics involved that lead to this outcome. 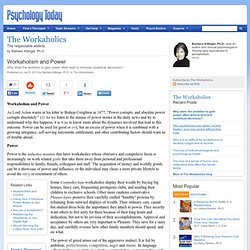 Power can be used for good or evil, but an excess of power when it is combined with a growing arrogance, self-serving narcissistic entitlement, and other contributing factors should warn us of trouble ahead. Power Power is the seductive mistress that lures workaholics whose obsessive and compulsive focus is increasingly on work related goals that take them away from personal and professional responsibilities to family, friends, colleagues and staff. The acquisition of money and worldly goods can be a showcase of power and influence, or the individual may chose a more private lifestyle to avoid the envy or resentment of others.

“How can I recover from workaholism?” Using Your 5 Personal Power Bases to Get Ahead. Decades ago, psychologists John French and Bert Raven suggested that there were 5 important power bases that can be used in the workplace or elsewhere to influence others. 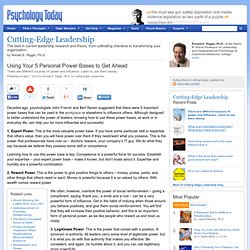 Although designed to better understand the power of leaders, knowing how to use these power bases, at work or in everyday life, can help you be more influential and successful. 1. Expert Power. This is the most valuable power base. If you have some particular skill or expertise that others value, then you will have power over them if they need/want what you possess. Learning how to use this power base is key. 2. We often, however, overlook the power of social reinforcement – giving a compliment, saying ‘thank you,’ a smile and a nod – can be a very powerful form of influence. 3. 4.