Avoidant Attachment: Part 1. Editor’s note: This article is the first in a two-part series. 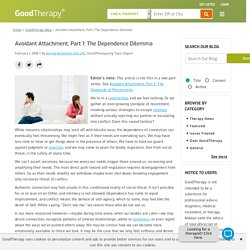 See Avoidant Attachment, Part 2: The Downside of Preservation. We’re in a relationship, and we feel nothing. Or we gather an ever-growing stockpile of resentment, invoking various strategies to escape intimacy without actually rejecting our partner or escalating into conflict. Does this sound familiar? While romantic relationships may start off with blissful ease, the dependence of connection can eventually feel threatening. We can’t assert ourselves, because we worry our needs trigger those around us, increasing and amplifying their needs.

Authentic connection may feel unsafe in this conditioned reality of social threat. In our more resourced moments—maybe during time alone, when our bodies are calm—we may desire connection, recognize patterns of limited relationships, admit to loneliness, or even regret about the ways we’ve pushed others away. Avoidant Origins Seclusion and Delusion The Freeze State: Hiding and Hoarding. Avoidant Attachment, Part 2. Editor’s note: This article is the second in a two-part series. 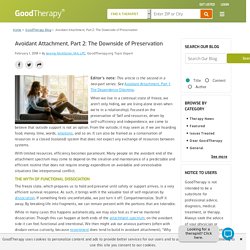 See Avoidant Attachment, Part 1: The Dependence Dilemma. When we live in a continual state of freeze, we aren’t only hiding, we are living alone (even when we’re in a relationship). Focused on the preservation of Self and resources, driven by self-sufficiency and independence, we come to believe that outside support is not an option. From the outside, it may seem as if we are hoarding food, money, time, words, emotions, and so on. It can also be framed as a conservation of resources in a closed (isolated) system that does not expect any exchange of resources between systems. With limited resources, efficiency becomes paramount. The Myth of Functional Dissociation The freeze state, which prepares us to hold and preserve until safety or support arrives, is a very efficient survival response. While in many cases this happens automatically, we may also feel as if we’ve mastered dissociation.

Communication Resignation. What Each Attachment Style Needs From Their Partner. Codependence. The Relating Project: CoDependence. How Does Attachment Theory Relate to Sex & Intimacy? — Anne-Marie Marron. Some of the following are primary hormones that serve us to bond, pursue sex, and become engorged with states of lust and desire. 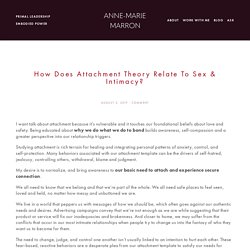 Very specific hormones are released during the time of bonding with our primary attachment figures. Many of these are mimicked again as adults through our sexual expression. Let’s take a look at these key players that cause us to lust and desire more sex from a physiological perspective. These same chemicals encourage us to commit to bonding with another person, even when we fear loss, rejection, or heartbreak.

Oxytocin Oxytocin, also known as ‘the love hormone,’ serves as a bonding agent between a baby and mother during pregnancy, and especially in the golden hour after birth. Eye gazing, facial expressions and physical touch all contribute to the release of oxytocin, the love bonding hormone. Sex incites an increased production of oxytocin. Endorphins Endorphins are our natural pain-killing hormones. Dopamine. The Attachment Theory- How Your Childhood Affects Your Relationships. The attachment secret: are you a secure, avoidant or anxious partner?

It was the breakup that changed Amir Levine’s life. 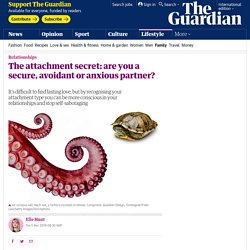 Fifteen years ago, he told his partner that he was falling in love with him and wanted them to move forward as a couple. His partner fled, moving across the country. The end of the relationship was especially painful for Levine. At the time he was a student at Columbia University in New York, where he is now assistant professor of clinical psychiatry. He was working in a therapeutic nursery programme, helping mothers with post-traumatic stress bond with their children.

In the 1950s, the influential British psychologist and psychiatrist John Bowlby observed the lifelong impact of the earliest bonds formed in life, between children and parents, or primary caregivers: attachment theory, which has been widely researched and drawn upon since then. When Levine came across attachment theory as a student, no one seemed to have applied it to adult romantic relationships but he immediately saw the relevance to his own heartbreak.