Are Tote Bags Good for the Environment? For at least a few decades, Americans have been drilled in the superiority of tote bags. 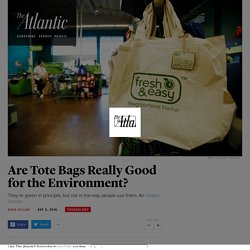 Reusable bags are good, we’re told, because they’re friendly for the environment. Disposable bags, on the other hand, are dangerous. Municipalities across the country have moved to restrict the consumption of plastic shopping bags to avoid waste. Many businesses have stopped offering plastic sacks, or provide them for a modest but punitive price. Bag-recycling programs have been introduced nationwide. But canvas bags might actually be worse for the environment than the plastic ones they are meant to replace. Such results feel deeply counterintuitive. Fashion Revolution. No one wants your old clothes. Updated | Visitors who stepped into fashion retailer H&M’s showroom in New York City on April 4, 2016, were confronted by a pile of cast-off clothing reaching to the ceiling. 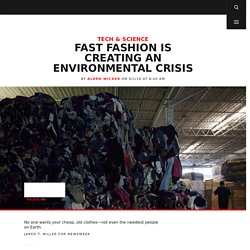 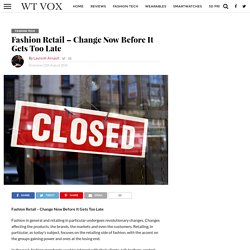 In the past, fashion merchants used to interact with their clients, talk to them, control and lead them to a market. The Internet shows no signs of stopping, with new phases of “greatest growth” in everything and every month. Fashion Retail – Technology makes shopping faster, easier Detailing on the age segmentation side, the trends become increasingly evident: The Millennials generation avoid owning or investing in anything of high value, constantly looking for discount and special offers. Human Rights. Conor Boyle Brands. Has Globalization been a Success? Who Makes Our Clothing? Where are our clothes made? - fashion and clothing.

Most of our clothes are made overseas in rural and poor areas as it’s much cheaper and more work gets done. 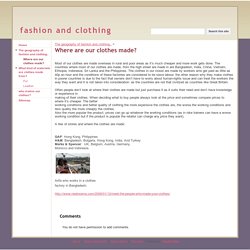 The countries where most of our clothes are made, from the high street are made in are Bangladesh, India, China, Vietnam, Ethiopia, Indonesia, Sri Lanka and the Philippines. Timothy Bouyez-Forge is making couture from motorbike parts. Natural dyes v synthetic: which is more sustainable? “I have workers in my factory who spend two to four hours everyday going to collect water, with no guarantees they’ll even find it,” says Sonal Baid, founder of Aura Herbal Wear, who blames synthetic dye factories for polluting local water sources. 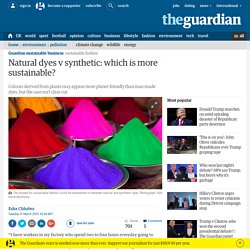 Baid and her husband, Arun, have figured out how to use natural dyes at scale at their factory in Ahmedabad, India. Now, they want to convert India’s textile manufacturers, taking them back to natural dyes on natural fabrics, a tradition that Baid said was commonplace in the country until 40 years ago, when synthetic dyes took off. Discovered in the mid-19th century by English chemist William Henry Perkin, mauveine, the first man-made colour, transformed textile manufacturing. These synthetic colours allowed manufacturers and dye houses to operate in large quantities, and offer vivid, rich colours. They became the go-to option; they stick to fabrics easily, don’t lose pigmentation, and offer a limitless palette of colour options.

The Journey of an Upcycled Life. I just thought if I’m moving somewhere, I’m going to take what is important to me. 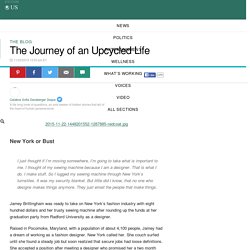 I thought of my sewing machine because I am a designer. That is what I do. I make stuff. So I lugged my sewing machine through New York’s turnstiles. It was my security blanket. Jamey Brittingham was ready to take on New York’s fashion industry with eight hundred dollars and her trusty sewing machine after rounding up the funds at her graduation party from Radford University as a designer. Clothing retailer H&M launches ‘World Recycle Week’ - letsrecycle.com. Clothing retailer H&M has today (18 April) begun its ‘World Recycle Week’ campaign and is aiming to collect 1,000 tonnes of old clothing from customers across its 3,600 stores worldwide. 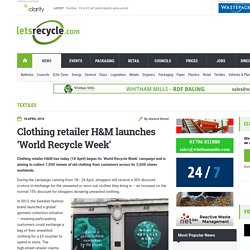 During the campaign, running from 18– 24 April, shoppers will receive a 30% discount in-store in exchange for the unwanted or worn out clothes they bring in – an increase on the normal 15% discount for shoppers donating unwanted clothing. The place where cast-off clothes end up. If you give clothes away to charity or for recycling, there's a good chance they will pass through a warehouse in the Hungarian town of Szekesfehervar, writes Nick Thorpe. 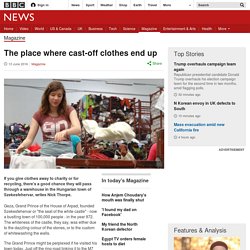 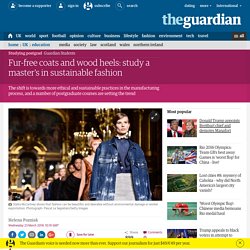 Stella McCartney. ‘Eco-sexy' vegan shoes take on leather industry in Brazil. How PETA Won the Angora Debate and What It Means for Fashion. NEW YORK, United States — In the spring of 2016, a group of top-tier fashion executives convened in midtown Manhattan for a closed-door meeting. 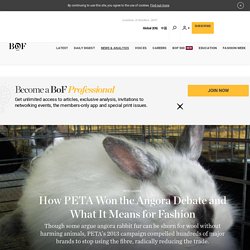 The conversation centred on the treatment of animals and the ethics policies they had in place. It was clear that many brands felt more pressure than ever to cooperate with the People for the Ethical Treatment of Animals — the international non-profit organisation widely known as PETA. Faux Fur is the Only Responsible Choice. A response to Mark Oaten’s article “Faux fur is more than faux pas, it’s poison”. Real fur sales are experiencing a dramatic drop since 2014 while the faux fur sector is enjoying a remarkable boom with a 10% increase in demand. This might explain why Mark Oaten, head of the International Fur Trade Federation, has been constantly trying to denigrate the faux fur sector.

Russian mink farms where thousands are slaughtered and left to rot to make $1m coats. These disturbing pictures expose the macabre truth about the fur farms in Russia and China which supply the fashion market in the world's leading cities, including London, Paris and New York.