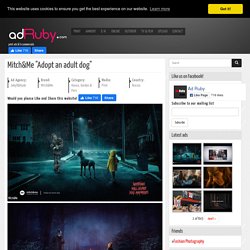 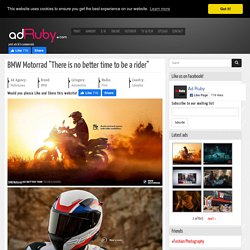 BMW Motorrad. Jules "Air in progress" In 2018, Air won the budget of the French menswear brand, Jules (Mulliez Group), after a competition that pitched them against two Paris agencies Buzzman and Fred & Farid. 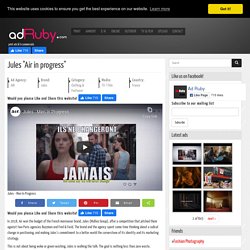 The brand and the agency spent some time thinking about a radical change in positioning, and making Jules’s commitment to a better world the cornerstone of its identity and its marketing strategy. This is not about being woke or green washing, Jules is walking the talk. The goal is nothing less than zero waste, high-quality, sustainable fashion that is built to last. The ambition is to create a movement of men who are aware, positive, sensitive and ready to bring about change, including when it comes to their masculinity. All this can be summed up in the new 3-word brand signature: “Men In Progress”. To launch its message in a loud and clear way, Jules chose to go back on television.

For Arnaud Bailly, CCD at Air, “it was a remarkable experience. But the story doesn’t end here. Honda "Be Moved Again" by Sid Lee. Honda invites the European public to feel again sensations that were lost after months of quarantine in the new ad campaign. 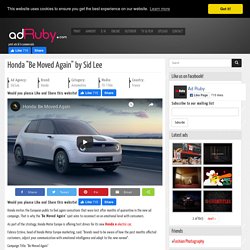 That is why the "Be Moved Again" spot aims to reconnect on an emotional level with consumers. As part of the strategy, Honda Motor Europe is offering test drives for its new Honda e electric car. Fabrice Estève, head of Honda Motor Europe marketing, said: "Brands need to be aware of how the past months affected customers, adjust your communication with emotional intelligence and adapt to the new normal". Honda "This is Not a Prototype" This is not a prototype. 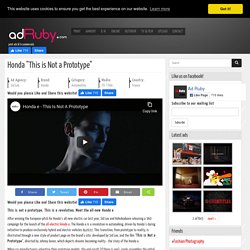 This is a revolution. Meet the all-new Honda e After winning the European pitch for Honda’s all-new electric car last year, Sid Lee and Hakuhodoare releasing a 360 campaign for the launch of the all-electric Honda e. The Honda e is a revolution in automaking, driven by Honda’s daring initiative to produce exclusively hybrid and electric vehicles by2022.

This transition, from prototype to reality, is illustrated through a new style of product page on the brand’s site, developed by Sid Lee, and the film “This is Not a Prototype”, directed by Johnny Green, which depicts dreams becoming reality - the story of the Honda e. When car manufacturers advertise their prototype models, the end result (if there is one), rarely resembles the initial design—a cycle that frustrates auto enthusiasts to no end. At the end of last year, Honda launched a build-up campaign, which gave us a first glimpse at the debut electric vehicle. Website: Deutsche Welle "FreeSpeech - Sleepless nights for autocrats" "Insomnia" - DW campaign promotes freedom and human rights With a new short film, Germany’s international broadcaster Deutsche Welle highlights what keeps autocrats up at night: a free and independent press. 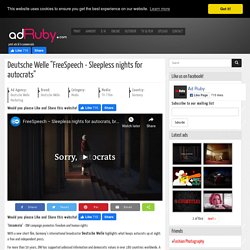 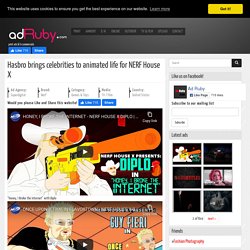 Try and spot Power Rangers and Transformers cameos too! Out of agency Superdigital, animation from Alkemy X director Rupert Cresswell is paired with live-action by Edelman’s Coast Productions, bringing the heat as each star opens the door into their own adventure within NERF House. Just don’t forget to reload between episodes.

Alkemy X and Cresswell harken to hyperactive Saturday morning cartoons in their 2D cel shaded approach, building custom worlds ranging from Diplo’s eighties-era digital motifs to Fieri’s food-filled Flavortown, with input from each celebrity. Blasting against each other with cartoon humor hijinks, the stars jump into this epic animated and gamified battle and embrace all things NERF. WWF: Desertification destroys 6.000 species every year. Would you please Like and Share this website! 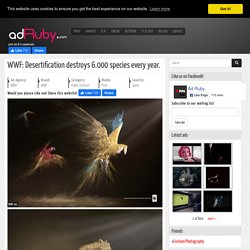 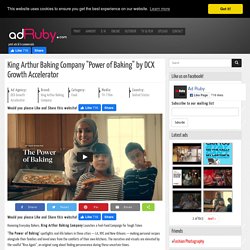 The narrative and visuals are elevated by the soulful “Rise Again”, an original song about finding perseverance during these uncertain times. The campaign, created by DCX Growth Accelerator for America's oldest flour company, defines King Arthur Baking Company as the brand for bakers and speaks to the power of baking to bring us together. King Arthur's mission is to be the ultimate resource and inspiration in the kitchen, to inspire connections and community through baking, and to use its business as a force for good.

Designer Parfums "Playboy Make the Cover" For decades, Playboy has been one of the world’s most recognized magazines; now together with Sid Lee Paris and Designer Parfums, Playboy Fragrances is launching two brand new fragrances, Make the Cover for Him and for Her that bring their legendary style, charisma and enduring legacy to life. 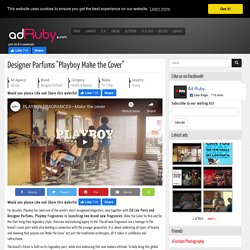 The all-new fragrances are a homage to the brand’s iconic past while also building a connection with the younger generation. It is about embracing all types of beauty and showing that anyone can ‘Make the Cover’ not just the traditional archetypes, all it takes is confidence and self-esteem. The brand’s future is built on its legendary past, while also embracing this new modern attitude. PlayBoy’s new advertisement for its new fragrance – Electric lighter. Honda: "A mixed reality race between real and virtual" by RPA. Honda’s rich racing heritage lies at the heart of this highly ambitious project, which features the all-new 2018 Civic Type R; a race car disguised as a daily driver. This innovative race between pro IndyCar driver Graham Rahal and pro gamer Peter Jeakins, started out at Microsoft’s (publisher of the Forza Motorsport Series) Turn 10 Studios in Seattle where Jeakins (known to the gaming world as theSLAPtrain) recorded his fastest lap time in a virtual Type R at the Road Atlanta race track in Forza Motorsport 7.

The race continued at the actual Road Atlanta in Braselton, GA, where Rahal raced a real 2018 Civic Type R against Jeakins’ virtual one. The real Type R was outfitted with a custom-made mixed-reality windshield that broadcast the gamer’s position on the track to Rahal in real time, allowing him to compete in a head-to-head race against the gamer. The meteoric rise of eSports has put digital athletes and traditional athletes on a collision course.