Humble One is a solar-powered electric SUV. An American startup, Humble Motors, has built solar panels into the roof of its electric car. 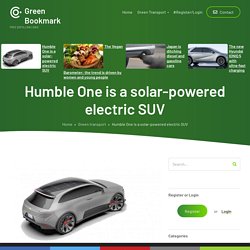 The project promises to be really cool: ex-Ford employees and Ferrari partners are involved in it. The Humble One is a solar-powered electric SUV with a length of approximately five meters and a mass of approximately 1800 kilograms. The streamlined body of the model should provide a relatively low coefficient of aerodynamic drag - 0.25. with. According to Humble Motors, the cabin will be able to comfortably accommodate four people, although formally the car is five-seater. The new Jeep Wagoneer and Jeep Grand Wagoneer luxury SUVs are here. The new Jeep Wagoneer and Jeep Grand Wagoneer have been officially announced in the United States. 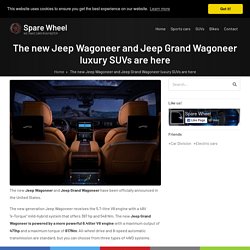 The new generation Jeep Wagoneer receives the 5.7-litre V8 engine with a 48V "e-Torque" mild-hybrid system that offers 397 hp and 548 Nm. The new Jeep Grand Wagoneer is powered by a more powerful 6.4liter V8 engine with a maximum output of 471hp and a maximum torque of 617Nm. All-wheel drive and 8-speed automatic transmission are standard, but you can choose from three types of 4WD systems. The body size of both models is 5,453 mm in length x 2,124 mm in width x 1,921 mm in height, and the wheelbase is 3,124 mm. The new Audi Q4 e-tron electric SUV with augmented reality. The new Mercedes-Benz EQA 250 compact SUV. Basically, the 2021 Mercedes-Benz EQA 250 is an electric variant of the GLA compact SUV. 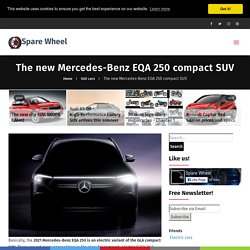 There are not many competitors in the class for compact, electric SUVs, but later this year the Audi Q4 e-Tron will arrive and with a somewhat smaller price tag and the Kia e-Niro will also be available. It is also not to be mistaken that EQA and GLA are siblings. But in fact, there are a number of changes in the design front and rear that reveal that this is the electric variant, EQA. The new Mercedes-EQA 250 can be ordered – Car Advert.

The new Mercedes-EQA 250 can be ordered now! 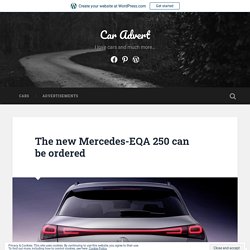 The prices for the electric SUV start at 47,540.50 euros. The extensive standard equipment of the Mercedes-Benz EQA 250 includes LED high-performance headlights with adaptive high beam assistant, EASY-PACK tailgate with electrical operation for opening and closing, 18-inch alloy wheels, ambient lighting with 64 colors, double cup holders, comfort seats with four-way adjustable lumbar support , reversing camera for a better overview and comfort when maneuvering as well as a multifunction sports steering wheel in leather. Also on board as standard are the intuitively operated infotainment system MBUX (Mercedes-Benz User Experience) and navigation with Electric Intelligence. As part of various packages, Mercedes-EQ customers can charge at the IONITY fast charging stations at a discounted electricity price of € 0.29 / kWh. 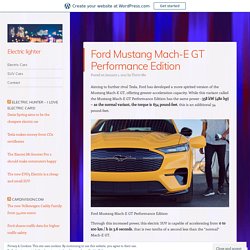 While this variant called the Mustang Mach-E GT Performance Edition has the same power –358 kW (480 hp) – as the normal variant, the torque is 634 pound-feet, this is an additional 34 pound-feet. Through this increased power, this electric SUV is capable of accelerating from 0 to 100 km / h in 3.6 seconds, that is two tenths of a second less than the “normal” Mach-E GT. The new EVO3 Electric is a cheap and small SUV. The Italian brand DR Automobiles, known mainly for selling high-end Chinese cars, has launched its first electric SUV, the EVO3 Electric. 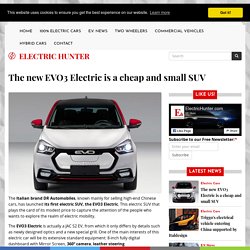 This electric SUV that plays the card of its modest price to capture the attention of the people who wants to explore the realm of electric mobility. The EVO3 Electric is actually a JAC S2 EV, from which it only differs by details such as newly designed optics and a new special grill. One of the main interests of this electric car will be its extensive standard equipment: 8-inch fully digital dashboard with Mirror Screen, 360º camera, leather steering wheel, electric rearview mirrors, climate control, electric windows, 17-inch alloy wheels, Hill-start control, LED fog lights, etc. The EVO3 Electric is powered by an 85 kW (116 hp) electric motor with 270 Nm; it enables it to accelerate from 0 to 50 km / h in 4.5 seconds and 0-100 km / h in 12 seconds, with a top speed of 130 km / h. Renault launches Arkana SUV in France. 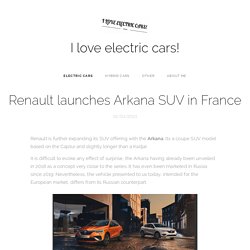 This strategy is similar to that operated by Renault for its Captur, the Russian version of which, called Kaptur, is also based on the Dacia Sandero platform. Although the Arkana (4.57 m long) rests on the platform of the Captur (4.23 m long) and not that of the Kadjar (4.49 m long), it is 8 cm longer than the latter. The Renault Arkana will be available with the 1.3 TCe unit coupled to an EDC box, in a 140 hp version, then also in a 160 hp version. Renault launches Arkana SUV in France. It is difficult to evoke any effect of surprise, the Arkana having already been unveiled in 2018 as a concept very close to the series. 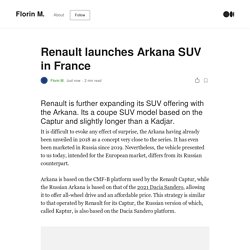 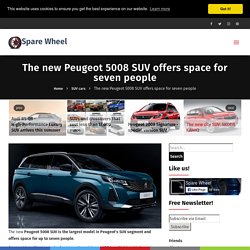 A new wide grille covers the front together with new LED headlights, which creates a modern and powerful expression. The hood is adorned with the model's monogram to emphasize Peugeot's DNA and the connection to siblings such as the Peugeot 208 and Peugeot 508. The Peugeot 5008 offers an extra personality and modernity with a redesigned front grille, new Full LED rear light blocks, new body shades and a new "Black Pack" option at the GT and GT Pack levels.. 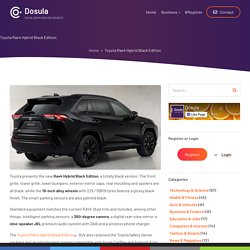 This website uses cookies to ensure you get the best experience on our website More info Cookie Consent plugin for the EU cookie law Skip to main content Toyota Rav4 Hybrid Black Edition. The new Nissan Magnite SUV dedicated to Indian market. Nissan has decided to increase its involvement in the Indian market. The Japanese manufacturer is aware of the leading role that this emerging country will play in the future of the automotive industry. To avoid being left behind, Nissan is introducing a new compact SUV on the Indian market. This is the new Nissan Magnite SUV. Designed in Japan, the Nissan Magnite has been developed to suit the unique requirements and aspirations of customers across India. With its bold exterior, spacious interior, turbocharged engine and advanced safety technology, it is built to be the perfect companion for city adventures.

The first images of the all-new Hyundai Tucson N Line. Profile Creation Sites Spare Wheel. French customers are varnished. Launched first in a convertible version, then in its sedan variant, each time in a limited series "La Prima", the new Fiat 500 electric arrives in a new special "France Edition" specifically dedicated to the French market.The Fiat 500 ''France Edition'', it is distinguished by exclusive colours "Onyx Black" and "Solid White", 16-inch alloy wheels, grille inserts and chrome side windows and the presence of a specific badge '' France Edition '' on the door frames.Under the hood however no change.

We find the same 118 hp electric engine which accelerates from 0 to 100 km / h in 9 seconds and has a top speed of 150 km / h. A 42 kWh lithium-ion battery is also available and allows a range of 320 km (WLTP cycle). It can recharge to 80% in 35 minutes (85 kW). source. Dacia Duster Pick-up truck from of 22,546 euros. Dacia announced the Dacia Duster Pick-up model. It is derived from the standard Dacia Duster model and keeps the same dimensions. Dacia Duster pick-up price: 22,546 euros with VAT. Spare Wheel. Dacia Spring electric car produces 45 hp. Dacia Spring: the electric car that will transform urban mobility.

The new Ford Kuga is praised by Euro NCAP. The new Ford Kuga's advanced driver assistance technologies are at the forefront of the very first assessment EuroNCAP has made of the systems that automatically help the driver to keep their distance, stay in their field and follow the current speed limits. Ford Kuga confirms that the rating "good" can also be achieved with a family SUV. Ford impressed Euro NCAP technical director with a good balance between driver engagement and driver assistance and a robust safety backup technologies. During a two-week test period, the new Kuga scored better on a number of test criteria than several competing models like Nissan Juke, Peugeot 2008, Tesla Model 3 or Volvo V60. Driving on heavily trafficked roads can be a stressful and demanding exercise for many. SUV by Florin Me.

Skoda ENYAQ iV is available to order. Opel Crossland facelift – Electric lighter. The Opel Crossland has received a facelift with aesthetic modifications borrowed from Opel Mokka and is available with diesel and petrol engines of up to 130 horsepower. The first images with the new Opel Crossland compact SUV. Nissan RE-LEAF: A 100% electric emergency vehicle. Skip to main content. The new Land Rover Defender P400e plug-in hybrid with 404 hp.

The new Skoda Enyaq iV all-electric SUV from 33,800 euros. The new Skoda Enyaq iV 100% electric SUV – Electric lighter. Skoda Enyaq iV 50: basic version will be equipped with an electric motor of 109 kW (148 hp) mounted on the rear axle and have a battery of 55 kWh (net capacity of 52 kWh) with the range of up to 340 km (WLTP). Skoda Enyaq iV 60: electric motor positioned on the rear axle provides 132 kW (180 hp), while the battery 62 kWh (net capacity of 58 kWh) provides a range of up to 390 kilometers (WLTP). The new Hyundai Santa Fe with a terrain selector. The new Hyundai Sante Fe SUV gets a new and improved Terrain Mode selector, with individualized settings for snow, sand and mud. Peugeot 3008 Hybrid4: with front or all-wheel drive. Audi Q4 E-Tron. The new Toyota RAV4 Hybrid Black Edition with 306hp.

Jeep Renegade 4xe is for adventure, freedom and passion. Jeep Renegade is the best-selling SUV from Jeep in Europe, and now it has a new variant with plug-in hybrid technology. Electrification is a crucial piece in the development of the Jeeps brand, where the core values ​​are still adventure, authenticity, freedom and passion. With its hybrid technology, Jeep Renegade 4xe, is the most efficient Jeep ever. Although it can go anywhere, it is also ideal for city driving, where the hybrid technology allows you to drive up to 50 km without local CO2 emissions. Jeep Renegade 4xe is a plug-in hybrid and a 4x4 without compromise. For example, four-wheel drive is always available, regardless of whether the battery is charged or not, and the car emits less than 50 g CO2 per km (NEDC), even though the engine package delivers up to 240 hp. A new luxury SUV: BMW X7 Dark Shadow Edition. Volkswagen Tiguan facelift: gasoline, diesel and hybrid. Top 5 best luxury SUVs over $ 20,000.