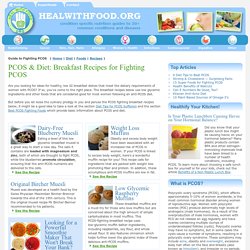 If so, you've come to the right place. Weight Loss Muffins. Breakfast Ideas for a Woman on a Low Glycemic Index Diet. 7 Breakfast & Eating Tips for Vegetarians with PCOS + Gluten-free Quinoa Granola - Hortus Natural Cooking - Natural, Vegetarian, Italian Food. NOTE: All the Weck jars in this post were kindly provided by MCM Emballages! 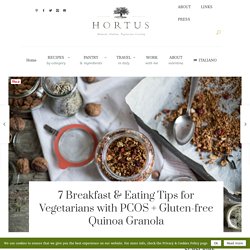 Thanks! IMPORTANT NOTE: this is my personal experience and, even though all people with PCOS I know had a very similar experience, I’m sure that WHAT WORKS FOR ME MIGHT NOT WORK FOR EVERYONE IN THE SAME WAY. Please refer to a specialist if your diet is not making you feel better. Last year, I posted some Breakfast Recipes and shared my story about PCOS. PCOS Diet Breakfast Ideas. They say that breakfast is the most important meal of the day and I personally find that a good PCOS breakfast sets me up for a good day. 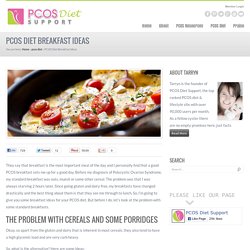 Before my diagnosis of Polycystic Ovarian Syndrome, my standard breakfast was oats, muesli or some other cereal. The problem was that I was always starving 2 hours later. Since going gluten and dairy free, my breakfasts have changed drastically and the best thing about them is that they see me through to lunch. Food for fantastic female health. Men and women are very different on the outside, but there are many differences on the inside, both anatomically and functionally. 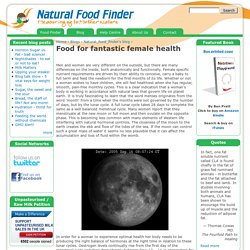 Female specific nutrient requirements are driven by their ability to conceive, carry a baby to full term and feed the newborn for the first months of its life. Whether or not a woman wishes to have children, she will feel healthiest when she has regular, smooth, pain-free monthly cycles. This is a clear indication that a woman’s body is working in accordance with natural laws that govern life on planet earth. It is truly fascinating to learn that the word menses originates from the word ‘month’ from a time when the months were not governed by the number of days, but by the lunar cycle. 12 hormone-disrupting chemicals (and how to avoid them) The Environmental Working Group (EWG) released one of its "Dirty Dozen" lists today, this one with the goal of educating consumers about the worst offenders when it comes to endocrine-disrupters, or hormone-altering chemicals, commonly found in our environment and in our homes. 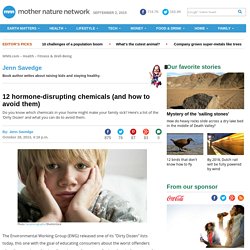 Chemicals that affect or mimic human hormones can cause problems in all of the body's major system, leading to such diseases as high blood pressure, cancer, brain damage and infertility. Here, according to the EWG, are the Dirty Dozen Endocrine-Disrupters and what you can do to minimize your exposure. 1. Two Food Additives Found to Have EstrogenLike Effects. March 19, 2009|123,046views Share Scientists have developed a fast new method to identify food additives that act as "xenoestrogens" -- substances with estrogen-like effects that are stirring international health concerns. 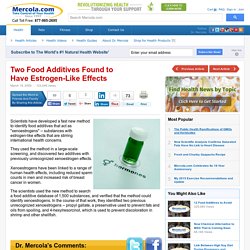 How to avoid estrogen mimicking chemicals. (NaturalHealth365) For decades, there has been serious concern about the environmental implications of hormone disrupting chemicals called “xeno-estrogens” or false estrogens. 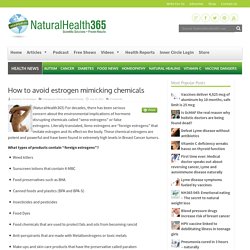 Literally translated, Xeno-estrogens are “foreign estrogens” that imitate estrogen and its effect on the body. These chemical estrogens are potent and powerful and have been found in extremely high levels in Breast Cancer tumors. What types of products contain “foreign estrogens”? Some Food Additives Mimic Human Hormones. A discovery that two commonly used food additives are estrogenic has led scientists to suspect that many ingredients added to the food supply may be capable of altering hormones. 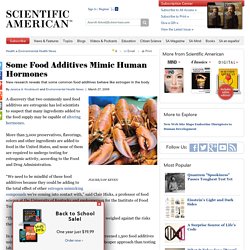 More than 3,000 preservatives, flavorings, colors and other ingredients are added to food in the United States, and none of them are required to undergo testing for estrogenic activity, according to the Food and Drug Administration. “We need to be mindful of these food additives because they could be adding to the total effect of other estrogen mimicking compounds we're coming into contact with,” said Clair Hicks, a professor of food science at the University of Kentucky and spokesperson for the Institute of Food Technologists, a nonprofit scientific group.

“The benefits of using these additives in food need to be weighed against the risks they present,” Hicks said. Then, the researchers exposed cells to the 13 food additives, which confirmed that two have estrogen-mimicking properties.