Fashion Through the Decades: History Repeats. It seems as though trends throughout history keep being recycled and brought back. 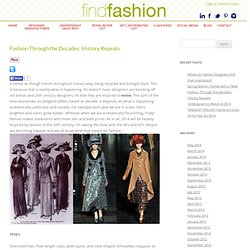 This is because that is exactly what is happening. It’s doesn’t mean designers are knocking off old trends and 20th century designers, it’s that they are inspired to revive. The spirt of the time-also known as Zeitgeist-differs based on decade. It depends on what is happening economically, politically, and socially.

For example each year we are in a war, hems lengthen and colors grow darker. 1910′s Oversized hats, floor-length coats, wide lapels, and cone shaped silhouettes reappear on the runways, inspired by the sophisticated women of the early 20th century 1920′s The flapper inspired dresses are still flooding the runways. 1930′s Similar to the 20’s, we see sleek, narrow silhouettes, short bobs, higher necklines, and a hint of Hollywood glamour. 1940′s Cropped jackets-also known as the 1940’s bolero jacket have been seen on the 2014 spring runways. 1950′s The decade of Marilyn.

History of Womens Fashion - 1900 to 1919. Women’s Dress & Style from 1900 to 1919 – The previous century had produced crinolines, bustles, polonaises, dolmans, abundant frills and furbelow’s of every description ; but the new century, at the height of the Belle Epoch ( beautiful era) was bowing to simplicity and to common sense, and, though details were still elaborate, fussy trimmings and unnatural lines were gradually being abandoned. 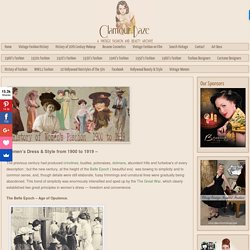 This trend of simplicity was enormously intensified and sped up by the The Great War, which clearly established two great principles in women’s dress — freedom and convenience. The Belle Epoch – Age of Opulence. ConstantlyAlice. I’m SO excited to finally get a start on this series! 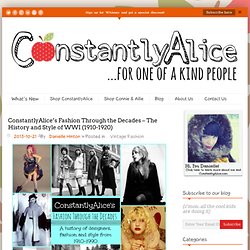 Since I’ve recently been obsessing about the 1920′s, this seemed to be a perfect place to begin In this post, I’ll touch on some of the fashions of the 1910′s and 1920′s (which encompassed WWI). We’ll discuss the evolution of styles and how they were affected by the events of the day. You’ll find that during this time period, shape and silhouette were constantly changing. 18th Century Stays Historical Corset Costume Piece by redthreaded. Setting in 18th Century Sleeves. Written by Katherine Caron-Greig When looking at sleeve patterns for 18th century dresses, there's a rather striking difference when compared to modern sleeves—they have corners. 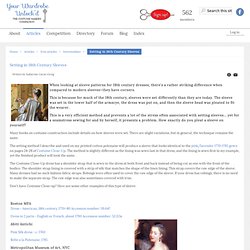 This is because for much of the 18th century, sleeves were set differently than they are today. The sleeve was set in the lower half of the armscye, the dress was put on, and then the sleeve head was pleated to fit the wearer. This is a very efficient method and prevents a lot of the stress often associated with setting sleeves... yet for a seamstress sewing for and by herself, it presents a problem. How exactly do you pleat a sleeve on yourself? Early 20th Century Sewing Patterns. Past Patterns. Recreating 16th and 17th Century Clothing: The Renaissance Tailor. Demonstrations>Accessories:Western European>Flat Caps and Tall Hats Once upon a time, a really long time ago, I joined a historical re-enactment society. 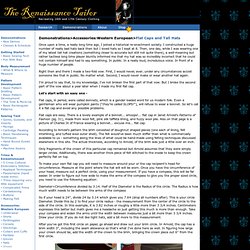 I constructed a huge number of really bad hats back then but I loved hats so I kept at it. Then, one day, while I was wearing one of my latest tall hat creations (something closer to accurate but still not quite there), a well-meaning but rather tactless long time player bluntly informed me that my hat was so incredibly incorrect that he could not contain himself and had to say something. In public. In a really loud, incredulous voice. Right then and there I made a two-fold vow. I'm proud to say that, to my knowledge, I've not broken the first part of that vow. 1900s Edwardian Vintage Sewing Pattern Two-Piece Dress b38-40-42 (r774) > 1900s Edwardian Vintage Sewing Pattern TWO-PIECE DRESS B38-40-42 (R774) Click here to view our shop Be sure to add me to your favourites list! 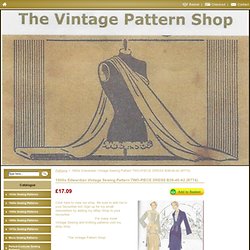 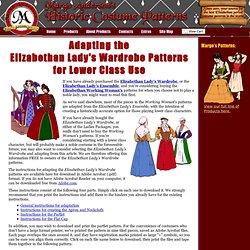 As we've said elsewhere, most of the pieces in the Working Woman's patterns are adapted from the Elizabethan Lady's Ensemble, with the intention of creating a historically accurate option for those playing lower class characters. If you have already bought the Elizabethan Lady's Wardrobe, or either of the Ladies Packages, you really don't need to buy the Working Woman's patterns. If you're considering starting with a lower class character, but will probably make a noble costume in the foreseeable future, you may also want to consider selecting the Elizabethan Lady's Wardrobe and adapting from this article. AGELESS PATTERNS™©1999. American Duchess : Historical Footwear & Reproduction Shoe Accessories. 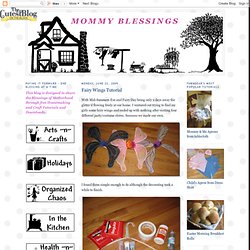 I ventured out trying to find my girls some fairy wings and ended up with nothing after visiting four different party/costume stores. Soooooo we made our own. I found them simple enough to do although the decorating took a while to finish. List of Supplies Needed: 4 wire coat hangers, Duct Tape, 2 pair of tights or sheer toe nylons. Modge Podge and paintbrush, Glitter, 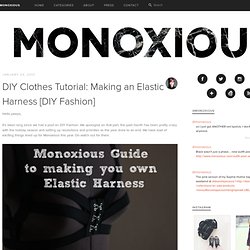 We apologise on that part, the past month has been pretty crazy with the holiday season and setting up resolutions and priorities as the year drew to an end. Georgian Corset Pattern Multi Sized Stays by MantuaMakerPatterns. Cosplay.com - Forum. Cosplay Makeup Book (REALLY HELPFUL) CosplaySupplies.com: Shop Online. DIY Costume Props, Armor, Weapons, Etc. DIY - Flower Crown. I love flowers and i love flower crowns even more. i'm going to show you how to make your own in just a few simple steps. perfect for a special occasion, a wedding or if you just want to feel pretty. this project costs around $15, but you can make several crowns so the cost is actually much lower. you can make a few different head pieces for yourself or make one for a friend. here's what you need... you can find all of these materials at your local craft store. i suggest buying high end fabric or silk flowers for a more realistic looking head piece. step one: create a circle that fits comfortably around your head, that is easy to take on and off. i tripled the amount of wire and then wraped a fourth time around to make it extra sturdy. step two: cut your first bloom and place it in the desired direction on the crown. using a small 4 inch piece of wire, wrap the bloom tightly with wire to the circle with pliers. 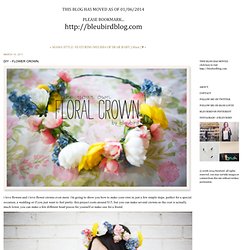 How To DIY A Flower Crown. Elizabethan Working Woman's Wardrobe - Margo Anderson's Historic Costume Patterns. $36.00 (Calif. add sales tax) Here is a pattern package that gives you all the pieces neccesary to make a complete Elizabethan working class woman's costume! This package will do for the middle- and lower-classes what the Elizabethan Lady's Ensemble did for the noblewomen -- in short, this set provides top-quality patterns, thoroughly researched and documented, in a single, comprehensive package. No more buying separate patterns for each piece. Who needs this pattern? If you portray the thousands of Renaissance huswives, young girls, and widowed women of the village, town or city. The Elizabethan Wardrobe Accessories - Margo Anderson's Historic Costume Patterns. Second Edition $22.00 (Calif. add sales tax) Many a stunning Renaissance costume has been painstakingly constructed and fitted, representing uncounted hours of work (or much more!)

Elizabethan Lady's Wardrobe - Margo Anderson's Historic Costume Patterns. Second Edition $42.00 (Calif. add sales tax) The Elizabethan Lady's Wardrobe is the centerpiece of our Elizabethan Lady's Ensemble. Upon its introduction in 2001, it dramatically raised the standard in historic costume patterns. Two years later, the Second Edition incorporated experience, suggestions, and customer feedback, which made it even better. This carefully researched & documented pattern set comprises an underskirt, six skirt types, four types of bodice and eight styles of sleeves -- not including the included variations like shoulder rolls, wings, and three styles of tabs!

Free Patterns Menu: Period Clothing Patterns and Cutting DiagramsVictorian and Edwardian era jacket, suit, shirt, skirt, petticoat, and bodice patterns for women, men, and children. Quick Microwave Method. Update: In January of 2013 I shared a second quick-method for making lace crowns that does not use a microwave. Click HERE for that tutorial. Georgian Patterns. Homemade Princess Leia Costumes. Homemade Costume Wings. It doesn't have to be special holiday for children to adorn a costume and play make-believe in their own imaginary land. Kids will dance and delight at any time in these easy to make butterfly, angel or fairy wings. The wings are made from three coat hangers and can be tailored to any size or style. Grab the kids and dig through your scrap ribbons, sequins and other embellishments because this project is great family fun. Get creative, get inspired and get crafting. Materials and Tools: three wire coat hangerstwo pairs of 3X pantyhoseduct tape2 yds. elasticneedle and threadscissorstwo large silk flowersribbonhot glue.