Meatloaf Recipe. Photo by Quentin Bacon yield Makes 6 servings with leftovers active time 30 min total time 1 1/2 hr This is the perfect antidote to the Sunday blues, not least because there will be enough left over to pack sandwiches for Monday's lunch. 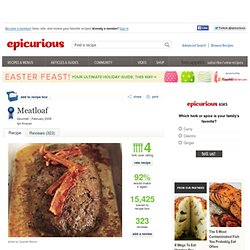 Finely chop bacon and prunes in a food processor, then add to onion mixture along with beef, pork, eggs, and parsley and mix together with your hands. Pack mixture into a 9- by 5-inch oval loaf in a 13- by 9-inch shallow baking dish or pan. Old-School Meat Loaf. This recipe was one of the five meals my mom had in her heavy weeknight rotation to feed our family of six. 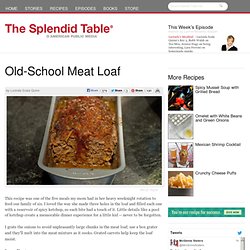 I loved the way she made three holes in the loaf and filled each one with a reservoir of spicy ketchup, so each bite had a touch of it. Little details like a pool of ketchup create a memorable dinner experience for a little kid -- never to be forgotten. I grate the onions to avoid unpleasantly large chunks in the meat loaf; use a box grater and they'll melt into the meat mixture as it cooks. Grated carrots help keep the loaf moist. 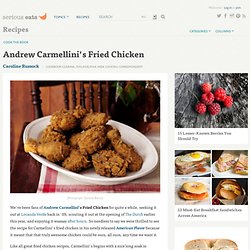 So needless to say we were thrilled to see the recipe for Carmellini's fried chicken in his newly released American Flavor because it meant that that truly awesome chicken could be ours, all ours, any time we want it. Like all great fried chicken recipes, Carmellini's begins with a nice long soak in buttermilk, in this case buttermilk seasoned with a sweet spicy mix of cayenne, Old Bay, honey, and Tabasco. Step two is a nine-part spice mix that is incorporated into the dredging flour and sprinkled generously over the chicken once its been fried to a deep brown crisp. For Carmellini, perfecting fried chicken involves the perfect marriage of super juicy meat and super crispy skin. Adapted from American Flavor by Andrew Carmellini. Serious Eats' Pulled Pork Sandwiches with Coleslaw. Sunday Supper: Sloppy Joes. Each Saturday evening we bring you a Sunday Supper recipe. 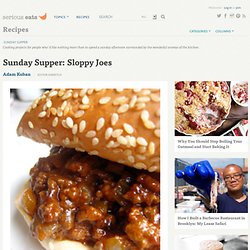 Why on Saturday? So you have time to shop and prepare for tomorrow. I don't know what did it, but this past week I'd been craving a good sloppy Joe. Luckily, I had just the recipe for these tangy-sweet sandwiches. You see, a couple years ago, I had a similar craving, but I wanted to avoid whatever weirdness might be in those canned mixes. 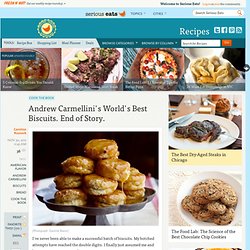 My botched attempts have reached the double digits. I finally just assumed me and biscuits weren't meant to be. But I reconsidered this notion after coming across a recipe in Andrew Carmellini's American Flavor entitled The World's Best Biscuits—End of Story. Bread Baking: Cheddar and Scallion Biscuits. [Photograph: Donna Currie] It doesn't matter what you call them. 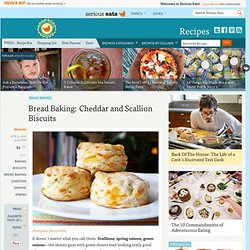 Scallions, spring onions, green onions—the skinny guys with green shoots start looking really good when spring is springing. Fluffy spring lettuce and asparagus are also harbingers of the season, but those onions deserve just as much glory. When my dad would plant onions in his garden, he'd thin out the plants as the season progressed to make room for the growing bulbs.

First he'd harvest some when they were young and skinny, then there would be some with small bulbs on the bottom. I love onions in just about every form, but with the skinny green onions, I'm just as anxious to make use of the green tops as I am the white part. About the author: Donna Currie has been cooking for fun and writing for pay since the days when typewritten articles traveled by snail mail. Crisp Grilled Cheese Sandwich.