Google DeepMind NHS medical trial broke UK privacy law. Image copyright Getty Images A UK hospital did not do enough to protect the privacy of patients when it shared data with Google, the UK's Information Commission (ICO) has ruled. 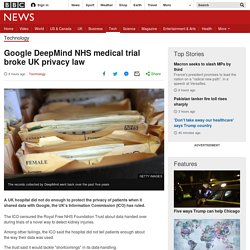 The ICO censured the Royal Free NHS Foundation Trust about data handed over during trials of a novel way to detect kidney injuries. Among other failings, the ICO said the hospital did not tell patients enough about the way their data was used. The trust said it would tackle "shortcomings" in its data-handling. Details on about 1.6 million patients was provided to Google's DeepMind division during the early stages of the medical trial last year. The information was used to develop and refine an alert, diagnosis and detection system that can spot when patients are at risk of developing acute kidney injury (AKI). In a statement, information commissioner Elizabeth Denham said attempts to make creative use of data had to be carefully managed. Uk.businessinsider.

Elizabeth Denham, information officer at the IPO.ICO The UK's data protection watchdog has ruled that a deal between DeepMind and an NHS trust "failed to comply with data protection law. 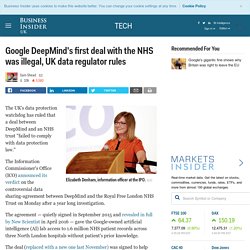 " The Information Commissioner's Office (ICO) announced its verdict on the controversial data sharing-agreement between DeepMind and the Royal Free London NHS Trust on Monday after a year long investigation. The agreement — quietly signed in September 2015 and revealed in full by New Scientist in April 2016 — gave the Google-owned artificial intelligence (AI) lab access to 1.6 million NHS patient records across three North London hospitals without patient's prior knowledge. The deal (replaced with a new one last November) was signed to help DeepMind test and develop a kidney monitoring app called Streams, which sends an alert to a clinician's smartphone if a patient's condition deteriorates. It also allows clinicians to view a patient's medical records and see where patients are being looked after.

Google DeepMind and healthcare in an age of algorithms. The most striking feature of the DeepMind-Royal Free arrangement is the conviction with which the parties have pursued a narrative that it is not actually about artificial intelligence at all, and that it is all about direct care for kidney injury—but that they still need to process data on all the Trust’s patients over a multi-year period. 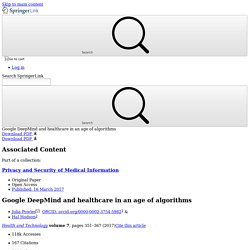 This is hardly a recipe for great trust and confidence, particularly given that the arrangement involves largely unencumbered data flows, both with one company, DeepMind, whose raison d’être is artificial intelligence; and its parent, Google, the world’s largest advertising company, that has long coveted the health market [57]. Large digital technology companies certainly have the potential to improve our healthcare systems. In this section, we identify a number of salutary lessons from the case study, assessing their implications for DeepMind, in particular, and for current and future directions in healthcare, more generally. 4.2 Data protection. DeepMind. We set up DeepMind Health to put the UK's most advanced technology at the service of patients, nurses and doctors. 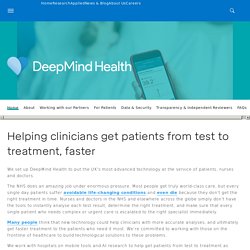 The NHS does an amazing job under enormous pressure. Most people get truly world-class care, but every single day patients suffer avoidable life-changing conditions and even die because they don’t get the right treatment in time. Nurses and doctors in the NHS and elsewhere across the globe simply don’t have the tools to instantly analyse each test result, determine the right treatment, and make sure that every single patient who needs complex or urgent care is escalated to the right specialist immediately. Many people think that new technology could help clinicians with more accurate analyses, and ultimately get faster treatment to the patients who need it most. We’re committed to working with those on the frontline of healthcare to build technological solutions to these problems. 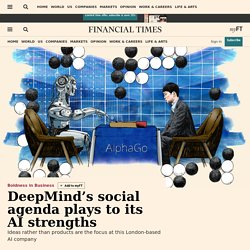 Sample the FT’s top stories for a week You select the topic, we deliver the news. A program called AlphaGo beat the reigning human world champion at go, an ancient Chinese board game considered to be one of the most complex pastimes man has ever devised. Google's move into British healthcare - Late Night Live. Big Read: What does Google DeepMind want with the NHS? Surrounded by glass, transparent lifts and pop music, the atrium at Google’s London headquarters is a world removed from the hectic chaos of an NHS hospital. 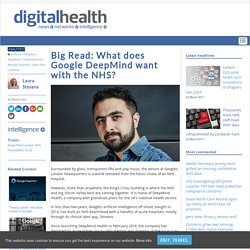 However, more than anywhere, the King’s Cross building is where the NHS and big Silicon Valley tech are coming together. It is home of DeepMind Health, a company with grandiose plans for the UK’s national health service. In less than two years, Google’s artificial intelligence off-shoot, bought in 2014, has built an NHS beachhead with a handful of acute hospitals, mostly through its clinical alert app, Streams. Since launching DeepMind Health in February 2016, the company has deployed its acute kidney injury (AKI) alerting app, Streams, at the Royal Free London NHS Foundation Trust, and, earlier this year, signed up Imperial College Healthcare NHS Trust for a similar deal.