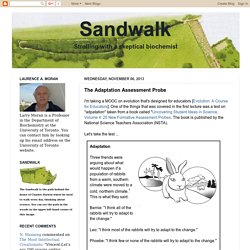 One of the things that was covered in the first lecture was a test on "adpatation" taken from a book called "Uncovering Student Ideas in Science, Volume 4: 25 New Formative Assessment Probes. The book is published by the National Science Teachers Association (NSTA). Let's take the test ... Adaptation Three friends were arguing about what would happen if a population of rabbits from a warm, southern climate were moved to a cold, northern climate.1 This is what they said:Bernie: "I think all of the rabbits will try to adapt to the change. " I agree with Bernie. Let's see how I did. Oops! The best answer is Phoebe's: "I think few or none of the rabbits will try to adapt to the change. " I didn't read the question carefully. We turned our clocks back one hour last weekend and I'm still adapting adjusting to the change. 1. Is%20It%20Fitter. Teddy Graham Lab. Teaching_strategies. ENSI/SENSI: Evolution/Nat.of Sci.Home Page. 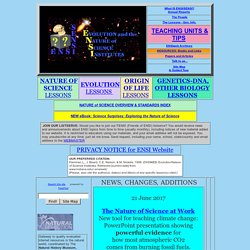 Scientists and science educators of all stripes — students, postdocs, faculty, and full- or part-time science communicators — are invited to enter the Sixth Annual Evolution Video Competition, sponsored by the Duke Initiative for Science & Society, the Howard Hughes Medical Institute (HHMI), the Society for the Study of Evolution (SSE) and the BEACON Center for the Study of Evolution in Action. First- and second-place winners will receive up to $1,000 and $500, respectively. 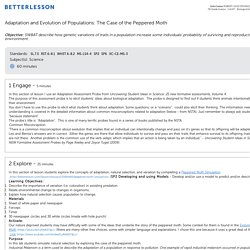 The passage, titled Naturally Selected to Survive, can be found for free by going onto that site, and searching for the title. The lexile level is 1090L, and there are a number of online resources that can be used to modify printed material to different reading levels. (Google app tldr (too long didn't read), Rewordify) The passage discusses in detail the environmental changes caused in England by the Industrial Revolution, and changes to the moth population as observed by scientists over the next 100 years.

In having your students read this article, consider their academic language level which is different than their social language level. Once students have read the passage, they answer a series of Text Dependent questions that assesses their comprehension of text. BetterLesson - Natural Selection - Survival of the Fittest. In this section of lesson students read an article on Natural Selection from cK-12. 1. 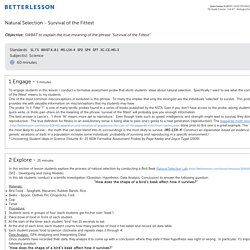 Inherited vs Acquired Traits 2. Adaptations. The Perfect Beak NGSS. To begin the lesson, have students complete the anticipation guide about natural selection, in order to gauge the students’ prior knowledge. 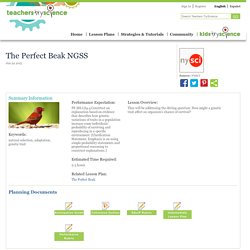 Review the guide together as a class, making note of misconceptions that students hold; you will want to tweak this lesson in order to address the specific needs of your students. Let students know that we will be exploring these concepts in a few simulation activities. Ask students if we all have the same color hair? Do we all have attached earlobes? (Allow them time to see if their earlobe is attached or free) Can we all roll our tongue? Discuss with students whether the trait to roll our tongue or the trait for our attached or detached earlobes affects our survival. 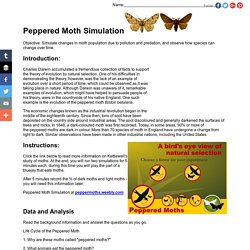 Introduction: Charles Darwin accumulated a tremendous collection of facts to support the theory of evolution by natural selection. One of his difficulties in demonstrating the theory, however, was the lack of an example of evolution over a short period of time, which could be observed as it was taking place in nature.

Although Darwin was unaware of it, remarkable examples of evolution, which might have helped to persuade people of his theory, were in the countryside of his native England. The economic changes known as the industrial revolution began in the middle of the eighteenth century. Instructions: Click the link below to read more information on Kettlewell's study of moths. After 5 minutes record the % of dark moths and light moths - you will need this information later. Data and Analysis 1. 2. 3. 4. 5. 6. 7.