HIV Testing. Importance of HIV Testing for Prevention of HIV Infection People with HIV who are aware of their status can get HIV treatment (antiretroviral therapy, or ART) and remain healthy for many years. 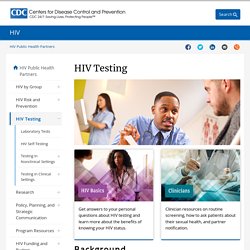 Studies show that the sooner people start treatment after diagnosis, the more they benefit from ART. HIV-Specific Criminal Laws. During the early years of the HIV epidemic, a number of states implemented HIV-specific criminal exposure laws. 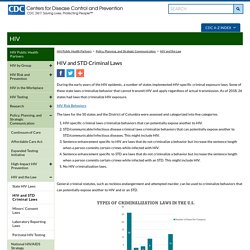 Some of these state laws criminalize behavior that cannot transmit HIV and apply regardless of actual transmission. As of 2018, 26 states had laws that criminalize HIV exposure. HIV Risk Behaviors( The laws for the 50 states and the District of Columbia were assessed and categorized into five categories. Myths and truths about HIV testing. 10.18.02.06. .06 Responsibilities of Laboratory Directors. 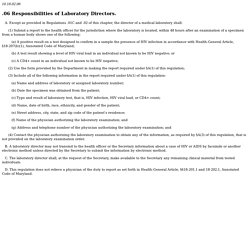 A. Except as provided in Regulations .01C and .02 of this chapter, the director of a medical laboratory shall: (1) Submit a report to the health officer for the jurisdiction where the laboratory is located, within 48 hours after an examination of a specimen from a human body shows one of the following: Cdc hiv art viral suppression. HIV Treatment as Prevention. State HIV Laws. Skip directly to A to Z list Skip directly to navigation Skip directly to page options Skip directly to site content. 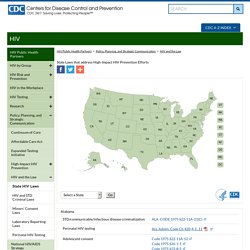 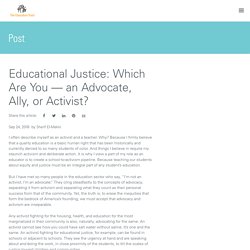 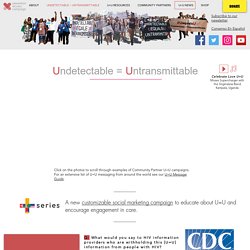 For an extensive list of U=U messaging from around the world see our U=U Message Guide. Maryland Excerpt from CHLP's Sourcebook on HIV Criminalization in the U. Resultado de imágenes de Google para. Man with HIV gets jail for not telling sexual partner he was... A Palm Bay man who never told his girlfriend that he was HIV positive has made a plea deal in the case against him.

More trending stories Michael Alves apologized to the woman and her family in court on Wednesday, saying he regrets what he did. "I hope one day you can forgive me," he said. His apology seemed to mean little to the woman who said Alves infected her with HIV. "Being lied to by someone you love so much just adds to the pain of having to deal with the news of being HIV positive. Man with HIV jailed for 'recklessly' infecting women.

Image copyright Avon and Somerset Police A man with HIV who infected two women with the virus has been jailed for five years at Bristol Crown Court. 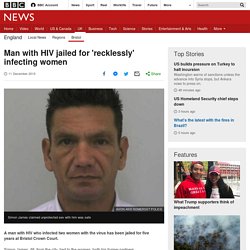 Simon James, 46, from the city, lied to the women, both his former partners. James was diagnosed with HIV in the 1990s but failed to use contraception, attend hospital appointments or take his medication, the court heard. He was found guilty of recklessly transmitting HIV - Avon and Somerset Police said it is only the third such conviction in UK legal history. Recorder Michael Parroy, QC, said his actions were "dreadful" and had "devastated" the lives of the women. Police said James initially did not tell the women he was infected and then, when his HIV status was discovered, he claimed to be allergic to latex condoms and insisted unprotected sex with him was safe because he had never infected anyone before. He added: "As a result, his victims have suffered greatly and I can only praise them for their bravery. " HIV 101 Flashcards. HIV Testing in the United States. Key Facts. 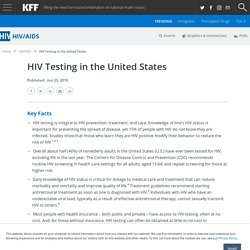 HIV Treatment as Prevention. June2017 ethics hiv. HIV/AIDS: General Overview. Discriminating against people who are infected with HIV/AIDS or anyone thought to be at-risk of infection violates individual human rights and endangers public health. 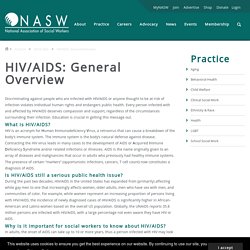 Every person infected with and affected by HIV/AIDS deserves compassion and support, regardless of the circumstances surrounding their infection. Education is crucial in getting this message out. What is HIV/AIDS? HIV is an acronym for Human Immunodeficiency Virus, a retrovirus that can cause a breakdown of the body's immune system. The immune system is the body’s natural defense against disease. Discrimination and HIV/AIDS.

A Factsheet for Practitioners Discriminating against people who are infected with HIV/AIDS or anyone thought to be at-risk of infection violates individual human rights and endangers public health. Every person infected with and affected by HIV/AIDS deserves compassion and support, regardless of the circumstances surrounding their infection. Education is crucial in getting this message out. Do HIV-positive people have any legal protection against discrimination? Individuals with disabilities are protected under the Americans with DisabilitiesAct (ADA). Public Accommodations. HIV Basics. PEP should be considered if you’ve had a recent possible exposure to HIV at work. Report your exposure to your supervisor, and seek medical attention immediately.

Occupational transmission of HIV to health care workers is extremely rare, and the proper use of safety devices and barriers can help minimize the risk of exposure while caring for patients with HIV. A health care worker who has a possible exposure should see a doctor or visit an emergency room immediately. PEP must be started within 72 hours after a recent possible exposure to HIV. HIV Basics. PrEP is for people without HIV who are at very high risk for getting it from sex or injection drug use.

The federal guidelines recommend that PrEP be considered for people who are HIV-negative and in an ongoing sexual relationship with an HIV-positive partner. This recommendation also includes anyone who isn’t in a mutually monogamous* relationship with a partner who recently tested HIV-negative, andis a . . . gay or bisexual man who has had anal sex without using a condom or been diagnosed with an STD in the past 6 months, orheterosexual man or woman who does not regularly use condoms during sex with partners of unknown HIV status who are at substantial risk of HIV infection (for example, people who inject drugs or women who have bisexual male partners).

PrEP is also recommended for people who have injected drugs in the past 6 months and have shared needles or works or been in drug treatment in the past 6 months. HIV Testing. HIV & Microaggressions – Universities Without Walls. This module will help you understand how small things we say or do can have big impact and add to HIV-related stigma.

The content is applicable to many other facets of social and intimate life. Direct any comments, suggestions or questions to ibanezcarraf@smh.caTo view the module, use an HTML5 compatible internet browser, such as Google Chrome or Firefox (test your browser’s compatibility here).Navigate this module using the “next” and “previous” buttons in the window below.You might be asked to complete quizzes to advance the module. In some modules, after completing a quiz, a results slide will appear in the module window below, in others, there is a result slide at the end, and in some cases you will have the option to print your answers, or re-take the quiz.If you close the module before you complete it, it lets you begin where you left off.

HIV Among Youth. Deaths In 2016, there were 162 deaths among youth with diagnosed HIV in the US and dependent areas. These deaths may be due to any cause. Prevention Challenges Inadequate Sex Education. The status of sexual health education varies throughout the United States and is insufficient in many areas according to CDC’s 2016 School Health Profiles. HIV testing and counselling for prisoners - HIV Testing and Counselling in Prisons and Other Closed Settings - NCBI Bookshelf.

Pregnant Women, Infants, and Children. CHLP HIV Crim Map 030119. HIV Criminalization in the United States: A Sourcebook on State and Federal HIV Criminal Law and Practice, The Center for HIV Law and Policy (2017) This resource for lawyers and community advocates outlines punitive laws, policies, and cases affecting people living with HIV (PLHIV) and other communicable diseases in all fifty states, the military, federal prisons, and U.S. territories.

NASW IAS 2010 Poster. A pill that protects people from HIV may also lead to more sex without condoms. When seat belt laws went into effect, some studies suggested drivers became more likely to speed or drive recklessly—a phenomenon called “risk compensation.” Gay, black and HIV positive: America's hidden epidemic. Justin's HIV Journal: Who Infected Me With HIV? Minors' Consent Laws. Pre-exposure prophylaxis (PrEP) can reduce the risk of HIV infection in people who are at high risk of getting HIV, including minors. A minor is a person who does not have the legal rights and responsibilities of an adult. Minors’ ability to access PrEP independently, i.e., without parental or guardian consent, varies throughout the United States (see Provider Reference Guide for details by state).

CDC assessed the statutes/regulations addressing minor’s ability to access STD and/or HIV services without parental/guardian consent, in the 50 states and D.C. CDC findings show that no jurisdiction explicitly prohibits minors’ access to PrEP without parental/guardian consent. Sixteen jurisdictions have statutes/regulations that explicitly allow minors of a particular age to independently access PrEP; the age for access varies by jurisdiction. HIV-Specific Criminal Laws. .07 Testing Requirements for Pregnant Women Receiving Prenatal Care. A. As part of a health care provider’s patient acceptance procedures or protocol, a health care provider shall give a pregnant woman information on being tested for the presence of HIV as part of the woman’s prenatal care program. B. In addition to §§C—E of this regulation, a health care provider testing a pregnant woman shall follow all requirements for pretest and post-test information as set forth in Regulations .06 and .08—.10 of this chapter as appropriate.