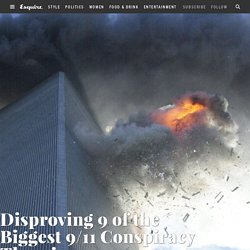 But for some, the idea that 19 men could commandeer four commercial airliners in a coordinated attack and use them as 400-ton missiles to destroy such massive buildings still doesn't make sense. Even 15 years after the fact, there are still plenty who cannot believe that these symbols of American power—military, economic, and, had they not been stopped, political—were so fundamentally vulnerable to destruction. People want more, and when the official accounts aren't satisfying, they begin to look elsewhere.

Advertisement - Continue Reading Below There are still plenty of 9/11 conspiracy theorists, and no matter what you tell them, they will tell you the attacks on September 11, 2001 did not happen the way our government or our media claim. There are an untold number of theories about what really happened that day. Below are nine of the most prominent theories, as well as the evidence explaining why they simply don't add up. eSkeptic » September 11, 2006. 9/11 Conspiracy Theories:The 9/11 Truth Movement in Perspective by Phil Molé At the Hyatt Regency O’Hare near Chicago, a crowd of approximately 400 people has gathered on a pleasant summer evening. 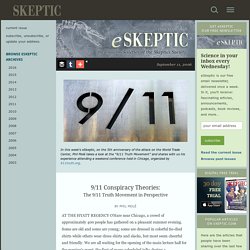 Some are old and some are young; some are dressed in colorful tie-died shirts while others wear dress shirts and slacks, but most seem cheerful and friendly. We are all waiting for the opening of the main lecture hall for the evening’s event, the first of many scheduled talks during a weekend-long conference. We bide some time by looking at the items for sale: DVD copies of Michael Moore’s Fahrenheit 9/11, the anti-Karl Rove documentary Bush’s Brain, and the more recent Walmart: The High Cost of Low Price. There is nothing especially unusual here, since all of these are available at the Borders or Best Buy near you.

The statement “we already know!” The Collapse of World Trade Center Buildings 1 & 2 Why do they think this? "9/11 Truth" movement: How Alex Jones and Michael Ruppert founded it. The 9/11 conspiracy theories predate 9/11. 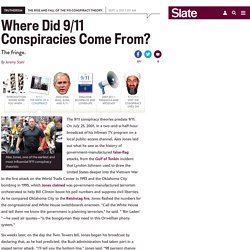 On July 25, 2001, in a two-and-a-half-hour broadcast of his Infowars TV program on a local public-access channel, Alex Jones laid out what he saw as the history of government-manufactured false-flag attacks, from the Gulf of Tonkin incident that Lyndon Johnson used to draw the United States deeper into the Vietnam War to the first attack on the World Trade Center in 1993 and the Oklahoma City bombing in 1995, which Jones claimed was government-manufactured terrorism orchestrated to help Bill Clinton boost his poll numbers and suppress civil liberties. As he compared Oklahoma City to the Reichstag fire, Jones flashed the numbers for the congressional and White House switchboards onscreen. "Call the White House and tell them we know the government is planning terrorism," he said. " 'Bin Laden' "—he used air quotes—"is the boogeyman they need in this Orwellian phony system.

" The 9/11 Truth Movement: The Top Conspiracy Theory, a Decade Later. Feature Dave Thomas Skeptical Inquirer Volume 35.4, July/August 2011 After ten years, the pesky 9/11 Truth movement has refined its arguments but still hasn’t proved the attacks were an inside job. 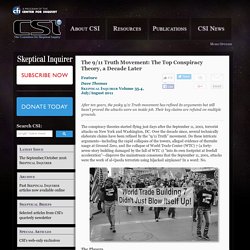 Their key claims are refuted on multiple grounds. The conspiracy theories started flying just days after the September 11, 2001, terrorist attacks on New York and Washington, DC. The Players Dylan Avery and Jason Bermas, the creators of the low-budget documentary film Loose Change, did much to give the 9/11 Truth movement significant momentum in 2005 and in following years. David Ray Griffin is a theologian whose voluminous writings on 9/11 are frequently cited by other 9/11 theorists. Once known as Fleischmann and Pons’s competitor for “cold fusion” research in Utah, Steven Jones has written several 9/11 Truth articles. Hollywood stars who have publicly supported 9/11 Truth claims include Rosie O’Donnell, Charlie Sheen, and Ed Asner.