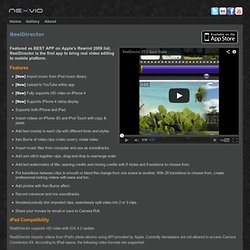 Features [New] Import music from iPod music library. [New] Upload to YouTube within app[New] Fully supports HD video on iPhone 4[New] Supports iPhone 4 retina displaySupports both iPhone and iPad.Import videos on iPhone 3G and iPod Touch with copy & paste.Add text overlay to each clip with different fonts and styles.Ken Burns of video clips (video zoom), rotate video.Import music files from computer and use as soundtracks.Add and stitch together clips, drag-and-drop to rearrange order.Add text watermarks of title, opening credits and closing credits with 8 styles and 9 positions to choose from.Put transitions between clips to smooth or blend the change from one scene to another.

iPad Compatibility ReelDirector supports HD video with iOS 4.2 update. ReelDirector imports videos from iPad's photo albums using API provided by Apple. How to import videos to iPad: Pro HD for iPad: Microsoft Office suite app for iPad » Quickoffice. Dave Winer. From Sort by A Letter To The Board Members Of RadiumOne TechCrunch – Leena Rao (@LeenaRao) – Apr 26 – In covering the day-to-day launches, funding announcements, and feature additions of tech startups and companies, I rarely think about the founder or CEO of a company's personal life. 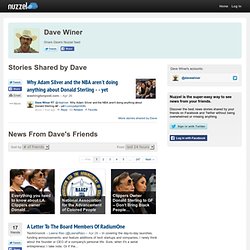 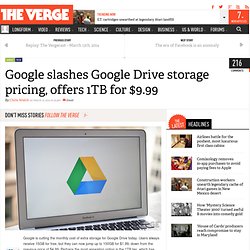 First Impressions of iOS 7 for Keyboard Power Users. Tl;dr: It’s not quite baked yet. 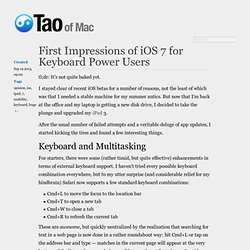 I stayed clear of recent iOS betas for a number of reasons, not the least of which was that I needed a stable machine for my summer antics. But now that I’m back at the office and my laptop is getting a new disk drive, I decided to take the plunge and upgraded my iPad 3. After the usual number of failed attempts and a veritable deluge of app updates, I started kicking the tires and found a few interesting things. Keyboard and Multitasking. Wallpapers for your iPad 2. From your iPad, click the download link under the wallpapers you want, then press & hold to save. 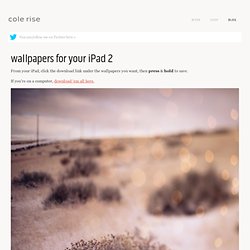 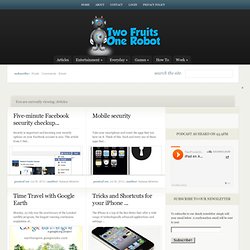 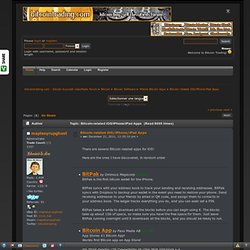 Here are the ones I have discovered, in random order. BitPak by Ominous Megacorp ($3.99)BitPak is the first bitcoin wallet for the iPhone.BitPak syncs with your address book to track your sending and receiving addresses. BitPak syncs with Dropbox to backup your wallet in the event you need to restore your phone. Send receiving addresses to your friends by email or QR code, and assign them to contacts in your address book.

A Weekend in Fargo. There are a plethora of writing tools. 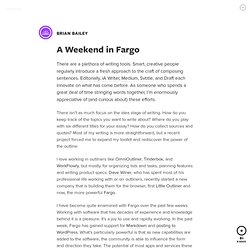 Smart, creative people regularly introduce a fresh approach to the craft of composing sentences. Editorially, iA Writer, Medium, Svbtle, and Draft each innovate on what has come before. As someone who spends a great deal of time stringing words together, I’m enormously appreciative of (and curious about) these efforts. There isn’t as much focus on the idea stage of writing. DEFCAD.

Bitcoin. Bitcoins are created as a reward in a competition in which users offer their computing power to verify and record bitcoin transactions into the blockchain. 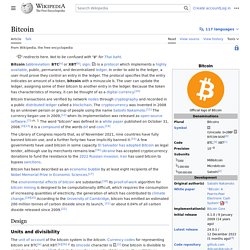 This activity is referred to as mining and successful miners are rewarded with transaction fees and newly created bitcoins.[14]:5–7 Besides being obtained by mining, bitcoins can be exchanged for other currencies,[21] products, and services.[22] When sending bitcoins, users can pay an optional transaction fee to the miners.[23] This may expedite the transaction being confirmed. According to a research produced by Cambridge University in 2017, there are between 2.9 million and 5.8 million unique users actively using a cryptocurrency wallet, most of them using bitcoin. Lifehacker. How to Record Skype Calls on your iPad or iPhone.

This tutorial describes a simple technique that will help you record Skype calls on your iPad or iPhone using free apps. 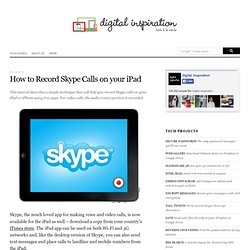 For video calls, the audio (voice) portion is recorded. Skype, the much loved app for making voice and video calls, is now available for the iPad as well – download a copy from your country’s iTunes store. The iPad app can be used on both Wi-Fi and 3G networks and, like the desktop version of Skype, you can also send text messages and place calls to landline and mobile numbers from the iPad. 10 of the Best Photo Editing Sites of 2013. “Best photo editing sites?” You say. “You can do that on the Internet these days?” Tendances des recherches – Recherches du moment. Nine Time-Saving Quicksilver Triggers. Lifehacker. Lifehacker. YouTube Pause Silences All Open YouTube Tabs. Miniflux - Minimalist and Open Source News Reader.

How to create a presentation in Fargo. 1. Create a new headline by clicking on the big plus icon in the left margin. Enter the title of your presentation, something like My First Presentation. 2. Under that headline, enter the titles of your slides. For your first experiment make it something easy like Slide 1, Slide 2, Slide 3. All Or Nothing. A number of readers have asked me to clarify my tweet yesterday about NetNewsWire being “dead” to me, despite the recent 4.0 Mac beta. I have some complaints about the app itself, but they’re mostly irrelevant personal preferences. Record and share video live from your mobile phone. Calibre - E-book management. De 10 essentiële Apple-URL’s. The Outliner of Giants: a free online outliner app for school reports, college & university dissertations, academic thesis & papers, complex project management specifications, or simply as a tool for organising your thoughts and ideas in one place.

The Sketchnote Typeface - Rohdesign. MY SECRET WEAPON in designing The Sketchnote Handbook was a family of custom fonts. I saved literally hundreds of hours by using this typeface, produced in partnership with my friend, Delve Withrington of Delve Fonts. CoreOS. Alt — A feed reader. ChrisPirillo : My, how times have changed. Enthuse.me - create an elegant profile to showcase your expertise. Take Your Desktop to the Beach with These Wallpapers. Quicksand. Apple Reveals New “All-Time Top Apps” Following Countdown To 50 Billion Downloads.

A week with the Fargo outliner. I’ve been using Fargo, the new outlining tool that lives in the browser, pretty heavily for the past week. As this semester winds down, I’m busy preparing to teach my summer session class and train about five research students in the lab for the summer. Both of those activities require a lot of thinking and planning, and because Fargo solves my biggest problems with other outlining tools, I’ve been using it fearlessly. One of my observations over the past week is that I appreciate having an ambient writing space. Never Miss A Word. Introducing LaunchBar Snippets. iCandy: Wallpapers, Iconen voor Mac, iPad, iPhone. GIF Brewery. Fargo, online outliner and more with Dropbox storage. Textdown is a Powerful Markdown Text Editor that Runs in a Browser Tab. What Is Markdown, and Why Is It Better for My To-Do Lists and Notes? Best Headphones Under $100: 2013 Headphone Buyers Guide Apartment Therapy's Annual Guide.

With the glut of headphones available on the market today, several pro audio brands are offering excellent headphone technology at reasonable prices. But which model to purchase on a non-hardcore-audiophile budget? Bootstrap. Google Reader Replacements - Lauren Goode. A Short Guide To Customizing Ubuntu 12.04 LTS (for Beginners) Good guide! Personally I despise Unity, so I am running Ubuntu 13.04 Gnome Edition, which comes with gnome 3, and is awesome! 5 Twitter tools to Unfollow Inactive Users. The Setup / Lynn Root. Robert Scoble's answer to Robert Scoble: What caused Robert Scoble to switch from iOS to Android and renounce his "Apple Fanboyism" 5 essential tools that every iTunes user should have. Onde AudioBook Converter For Mac. Lifehacker. MyType Keyboard. LaTeX – A document preparation system. Google Reader joins graveyard of dead Google products.

Lifehacker. Liquid OS X. iCandy: Wallpapers, Iconen voor Mac, iPad, iPhone. Shiori - Pinboard and Delicious OS X client. Alphabetical Order Tool let's you alphabetize text online. And Youtube have caused me to forget how to internet. What other sites am I missing out on? : AskReddit. iCandy: Wallpapers, Iconen voor Mac, iPad, iPhone. How to Use the Fast and Powerful Mutt Email Client with Gmail. Marshall Hanwell: An 'iPod' speaker on steroids.