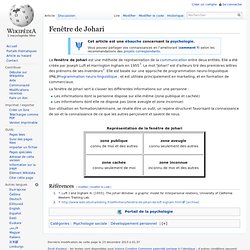 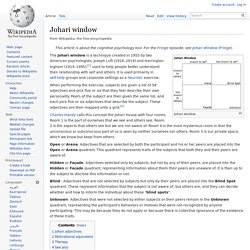 It is used primarily in self-help groups and corporate settings as a heuristic exercise. When performing the exercise, subjects are given a list of 58 adjectives and pick five or six that they feel describe their own personality. Peers of the subject are then given the same list, and each pick five or six adjectives that describe the subject. These adjectives are then mapped onto a grid.[2] Charles Handy calls this concept the Johari House with four rooms. Open or Arena: Adjectives that are selected by both the participant and his or her peers are placed into the Open or Arena quadrant. Beyond the Discussion Board - 10 Tips for Engaging Online Students - Google Docs. Placemat Method in Teaching. By Tsam on During our BP session on the 12th January, we were introduced to the “System Theory” and I found the method of introduction to the topic quite interesting. 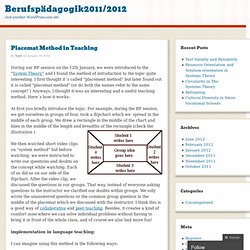 I first thought it´s called “placement method” but later found out it is called “placemat method” (or do both the names refer to the same concept? ) Anyways, I thought it was an interesting and a useful teaching method. Here´s how it works: At first you briefly introduce the topic. We then watched short video clips on “system method” but before watching, we were instructed to write our questions and doubts on the concept while watching. Implementation in language teaching: I can imagine using this method in the following ways: In order to introduce or revise a topic just like we did in the BP session. Big Thinkers: Judy Willis on the Science of Learning. Judy Willis: Hi, I'm Judy Willis and I am a neurologist. 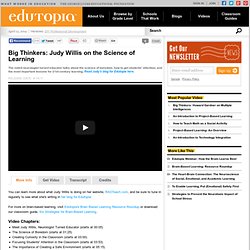 I've been a neurologist for 15 years and after the 15 years my patient practice really changed. I started getting so many referrals for kids whose teachers thought they had ADD, obsessive compulsive disorder, staring spells, seizures petit mal epilepsy, and the increase was huge and yet the kids had no greater incidence of it. And I saw the notes were coming from the school so I visited the schools. I'd look in the classrooms and I saw kids who indeed were playing with everything they could find, staring out the window, coloring on someone's chair or book. The problem was that the way they were being taught was lectured. There's a part of the brain that is an emotional filter. So if a person is in a state of stress, the amygdala gets highly active. So we need to keep that switching station in a state of low stress.

4 Big Things Transformational Teachers Do. The key to transformational teaching is not reacting, but rather a grinding obsession with analysis and preparation. 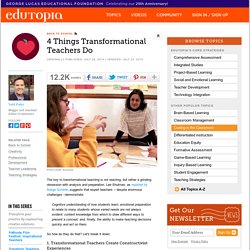 Lee Shulman, as reported by Marge Scherer, suggests that expert teachers -- despite enormous challenges --demonstrate: Cognitive understanding of how students learn; emotional preparation to relate to many students whose varied needs are not always evident; content knowledge from which to draw different ways to present a concept; and, finally, the ability to make teaching decisions quickly and act on them. So how do they do that? Let's break it down. 1. Instructors tend to use one of two instructional orientations: Transmission: Where "the teacher's role is to prepare and transmit information to learners" and "the learners' role is to receive, store, and act upon this information. " What Does Transformational Teaching Look Like? Have students ask questions and solve real-world problems. 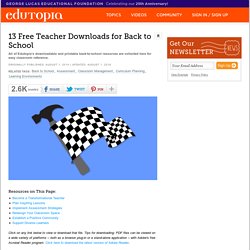