Stacy Hyatt sur Twitter : "#VeteransDay Thank You Veterans! Lest we Forget~ America has saved the world many times! Twitter Paper Toy: For The Seriously Addicted. So what does it mean to be addicted to Twitter? 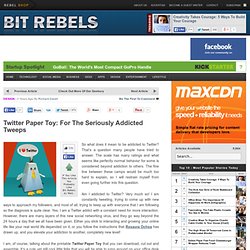 That’s a question many people have tried to answer. The scale has many ratings and what seems like perfectly normal behavior for some is considered beyond addiction to others. The fine line between these camps would be much too hard to explain, so I will restrain myself from even going further into this question. #friendbomb - Build Your Network and Accelerate the Awakening. FCC asks court to dismiss suits over "net neutrality" rules. Social Media ROI for Idiots. Some companies are still have trouble understanding the return on investment of a well-run social media campaign. 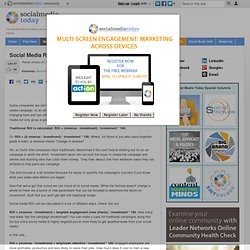 In an effort to take into account short attention spans and a general lack of interest in changing hard and fast attitudes we've put together a quick, and easy, piece here to show how social media not only gives a great return on investment, it now surpasses most traditional media. Traditional ROI is calculated: ROI = (revenue - investment) / Investment * 100. Or: ROI = (∆ revenue - investment) / Investment * 100. Where, for those of you who have forgotten grade 9 math, ∆ revenue means "change in revenue". Ok, so that's how companies have traditionally determined if the cash they're shelling out for an ad campaign is worth the effort. The 2nd formula is a bit smarter because it's easier to quantify the campaign's success if you know what your sales were before you began. Facebook and LinkedIn - How to Define Their Purposes.

The Top 10 Twitter Clients To Help You Tweet Better - Blog - Marty McPadden. Twitter may not be as popular as Facebook yet but the social media platform has grown leaps and bounds since I started using the site in September of 2007. 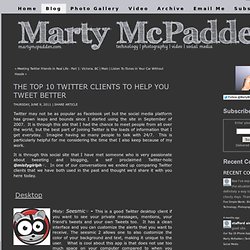 It is through this site that I had the chance to meet people from all over the world, but the best part of joining Twitter is the loads of information that I get everyday. The 50 "Top Dogs" of Twitter. There have been a lot of great articles listing the top women on Twitter. 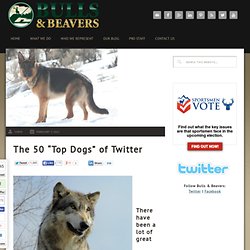 The latest was last week’s popular, Top 75 Badass Women on Twitter on Bit Rebels by Diana Adams @adamsconsulting and Amy Howell @HowellMarketing. It’s an awesome post, and there is no doubt that women are a strong and powerful force on Twitter, but it got me thinking… I have yet to see a list of the top men, and many of ‘us guys’ have been feeling left-out! So, I decided to start my own list, The Top Dogs of Twitter. I asked my good friend and Twitter Badass herself, Lori McNee @lorimcneeartist to help me out. Lori and I started collaborating on who we both felt were truly The Top Dogs of Twitter. We made this list to represent the working professionals and the average Joe who are in the Twitter trenches, day in, and day out. Some of theses Top Dogs have many followers, and some are much smaller – but, don’t let their size fool you! 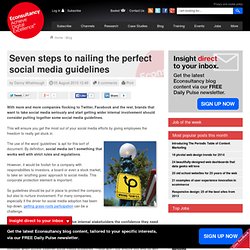 This will ensure you get the most out of your social media efforts by giving employees the freedom to really get stuck in. The use of the word ‘guidelines’ is apt for this sort of document. By definition, social media isn’t something that works well with strict rules and regulations. Sword and the Script: Sphere of influence: 11 social media statistics. I think she sent this to the wrong person... - jackalopekid's posterous. Washington Post Joins Facebook Advertising - Why Your Business Should Pay... Year 2010 was a monumental year for Facebook as it made great inroads into the business user community. 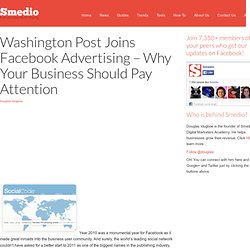 And surely, the world’s leading social network couldn’t have asked for a better start to 2011 as one of the biggest names in the publishing industry, Washington Post announced its decisions to launch SocialCode, a subsidiary that will help brands build and monetize their presence on Facebook. And why am I so excited about it? IMO, this is huge from a business perspective as it bridges the gap between publishing and advertising agencies. Washington Post Joins Facebook Advertising - Why Your Business Should Pay Attention. Paper.li – read Twitter and Facebook as a daily newspaper. 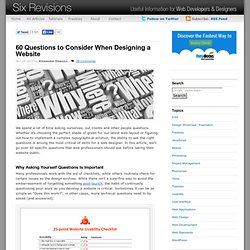 Whether it’s choosing the perfect shade of green for our latest web layout or figuring out how to implement a complex typographical solution, the ability to ask the right questions is among the most critical of skills for a web designer. In this article, we’ll go over 60 specific questions that web professionals should ask before taking their website public. Why Asking Yourself Questions Is Important Many professionals work with the aid of checklists, while others routinely check for certain issues as the design evolves. While there isn’t a sure-fire way to avoid the embarrassment of forgetting something post-launch, the habit of continually questioning your work as you develop a website is critical. The 25-point Website Usability Checklist (PDF) can be a helpful aid to your workflow. 15 Questions for Project Management One of the central tasks of web design is project management. 14 Have you got the media?