Productivity. Homesteading. 10 Things to Do Before You Go to Bed. Everyone is obsessed with how successful people start their day. 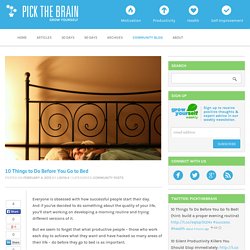 And if you’ve decided to do something about the quality of your life, you’ll start working on developing a morning routine and trying different versions of it. But we seem to forget that what productive people – those who work each day to achieve what they want and have hacked so many areas of their life – do before they go to bed is as important. The evening routine is one of the most underestimated habits, and yet an absolute must when it comes down to changing how your day goes and whether you want to get stuff done. A nighttime ritual affects your sleep and the mood you’ll be in when you get up, and thus becomes the foundation of your whole day.

It’s a wind down period and there are many things you can do at that time. Here’s what you can include in it: A walk. Go for a short walk in the evening. Asses your day. Every single night Benjamin Franklin took the time to make an examination of the day. How to Build a Meaningful Career. Everyone aspires to have purpose or meaning in their career but how do you actually do that? 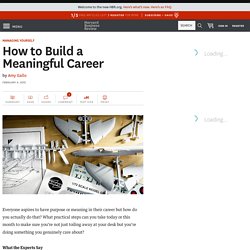 What practical steps can you take today or this month to make sure you’re not just toiling away at your desk but you’re doing something you genuinely care about? Swedbank och sparbankerna - Logga in. The Selling of the Avocado. Twenty-five years ago, talk-show host Gordon Elliott was working as a reporter for a local morning TV show called Good Day New York. 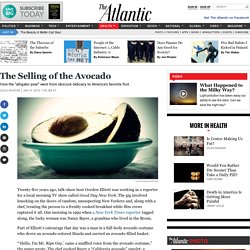 The gig involved knocking on the doors of random, unsuspecting New Yorkers and, along with a chef, treating the person to a freshly cooked breakfast while film crews captured it all. One morning in 1992 when a New York Times reporter tagged along, the lucky woman was Nancy Bayer, a grandma who lived in the Bronx. Newliferadio.it. 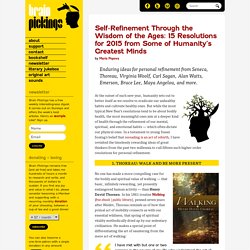 At the outset of each new year, humanity sets out to better itself as we resolve to eradicate our unhealthy habits and cultivate healthy ones. But while the most typical New Year’s resolutions tend to be about bodily health, the most meaningful ones aim at a deeper kind of health through the refinement of our mental, spiritual, and emotional habits — which often dictate our physical ones. In a testament to young Susan Sontag’s belief that rereading is an act of rebirth, I have revisited the timelessly rewarding ideas of great thinkers from the past two millennia to cull fifteen such higher-order resolutions for personal refinement.

No one has made a more compelling case for the bodily and spiritual value of walking — that basic, infinitely rewarding, yet presently endangered human activity — than Henry David Thoreau. Smith writes: Self-Refinement Through the Wisdom of the Ages: 15 Resolutions for 2015 from Some of Humanity’s Greatest Minds. » Tribe: The Baganda, Uganda’s Royal Kingdom, Past & Present. The 5.5 million Baganda are a Bantu-speaking people (singular Muganda; often referred to simply by the root word and adjective, Ganda) who make up the largest Ugandan ethnic group, representing approximately 20% of Uganda’s total 28 million population. 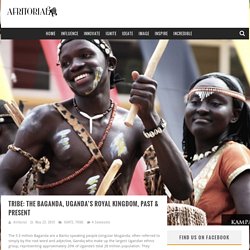 They occupy the central part of Uganda which was formerly called the Buganda province. Buganda, which means ‘bundles,’ is their subnational kingdom, the largest of the traditional kingdoms in present-day Uganda, spread out in the modern districts of Kampala, Mpigi, Mukono, Masaka, Kalangala, Kiboga, Rakai, Sembabule and Mubende. Traditional Baganda dancers Their language is referred to as Luganda and they refer to their customs as Kiganda customs. Sometimes the generic term Ganda is used for all the above. Plans & Goals. Self-Refinement Through the Wisdom of the Ages: 15 Resolutions for 2015 from Some of Humanity’s Greatest Minds. Fit 10-Days Worth of Stuff in 1 Small Carry-on. Levels of consciousness hawkins. The scientific evidence against spanking, timeouts, and sleep training. At the end of a gravel road in the Chippewa National Forest of northern Minnesota, a group of camp counselors has gathered to hear psychotherapist Tina Bryson speak about neuroscience, mentorship, and camping. 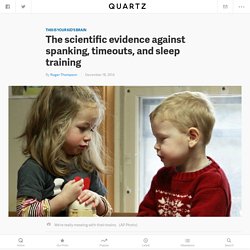 She is in Minnesota by invitation of the camp. Chippewa is at the front of a movement to bring brain science to bear on the camping industry; she keynoted this past year’s American Camping Association annual conference. As Bryson speaks to the counselors gathered for training, she emphasizes one core message: at the heart of effective discipline is curiosity—curiosity on the part of the counselors to genuinely understand and respect the campers’ experience while away from home. Brain science is far from a precise field, but Bryson deploys it effectively when she conducts trainings. Mina Android-appar - Google Play. Your Lifestyle Has Already Been Designed (The Real Reason For The Forty-Hour Workweek) By David Cain / raptitude.com Well I’m in the working world again. 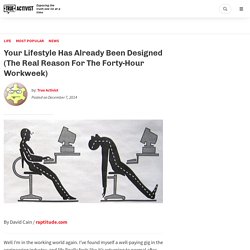 I’ve found myself a well-paying gig in the engineering industry, and life finally feels like it’s returning to normal after my nine months of traveling. Because I had been living quite a different lifestyle while I was away, this sudden transition to 9-to-5 existence has exposed something about it that I overlooked before. Since the moment I was offered the job, I’ve been markedly more careless with my money. Not stupid, just a little quick to pull out my wallet.