Auditory Processing Disorder International Research. Absent otoacoustic emissions predict otitis media in young Aboriginal children: a birth cohort study in Aboriginal and non-Aboriginal children in an arid zone of Western Australia. To our knowledge this is the first comprehensive investigation of middle ear health (which includes hearing assessment) conducted simultaneously in young indigenous and non-indigenous children living in an urban setting, although an Australia-wide study of Aboriginal and non-Aboriginal people of all ages was conducted 30 years ago [5]. 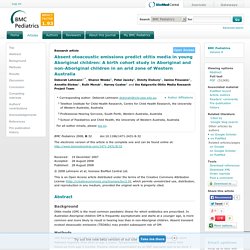 All study participants had high rates of OM but rates were particularly high in Aboriginal children, in whom disease began at a very young age, as has been reported previously [7,9,10]. There was significant hearing loss from age 6 months onwards, particularly in Aboriginal children, one-third of whom had hearing loss >40 dB. The general lack of symptoms with such high disease burden is of concern since families would not be prompted to bring children for medical care.

Auditory encoding abnormalities in children with autism spectrum disorder suggest delayed development of auditory cortex. Auditory processing disorders in neurological patients and in patients with developmental disorders. In the mid 1950's, Bocca, Calearo and Cassinari (1954) made the seminal observations that patients with temporal lobe tumours complained of hearing difficulties, despite the presence of normal hearing thresholds and normal speech recognition in quiet. 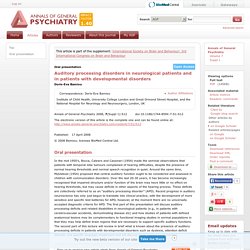 Around the same time, Myklebust (1954) proposed that central auditory function ought to be considered and assessed in children with communication disorders. Over the last 20-30 years, it has become increasingly recognised that impaired structure and/or function of the brain may have little or no effect on hearing thresholds, but may cause deficits in other aspects of the hearing process. These deficits are collectively referred to as an “auditory processing disorder” (APD). Recent progress in auditory neuroscience has only just begun to translate into clinical practice, with the development of more sensitive and specific test batteries for APD, however, at the moment there are no universally accepted diagnostic criteria for APD. Auditory temporal processing in healthy aging: a magnetoencephalographic study. Brain activity underlying auditory perceptual learning during short period training: simultaneous fMRI and EEG recording.

Classification of the primary progressive aphasias: principles and review of progress since 2011. Root diagnosis of PPA The root diagnosis of PPA is based on the objective impairment of language while other cognitive domains (episodic and topographical memory, constructional praxis, etc.) are relatively preserved [6]. 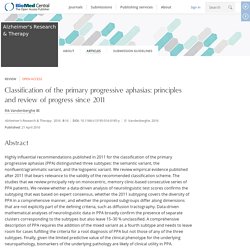 In the initial disease stages, impacts on the instrumental activities of daily living are entirely attributable to language problems. Confusion may arise when the root diagnostic criterion is not fulfilled and the subtyping is applied nevertheless. In that respect it is of particular importance not to confuse PPA or any of its subtypes with the left hemisphere-dominant type of clinically probable AD with prominent language symptoms, a disease entity that has been well-known for a long time [7, 8]. In PPA due to AD, tests of nonverbal domains—for instance, copy of the overlapping pentagons in the Mini Mental State examination or ideomotor praxis—should be, by definition, preserved. 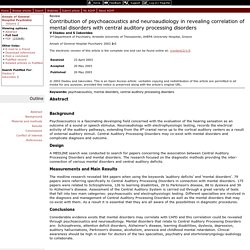 Age limitations have to be considered [11] and specially designed tests are used for different age groups. When evaluating children who are less than 12 years old an important step is the Pediatric Speech Intelligibility (PSI) Test. Effect of early onset otitis media on brainstem and cortical auditory processing. Adequate sensory experience is critical to the developing nervous system – for the expression as well as maintenance of sensory functions even when such functions are innately determined [1]. 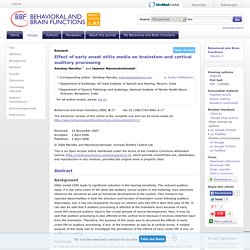 Development and maintenance of auditory sense is no exception. In other words, reduced auditory input, early in life, may affect auditory processing later in life. Otitis media (OM) is a common condition that results in hearing loss in early years of life. Sandeep and Jayaram [2] have reported that OM occurring early in life may lead to subtle difficulties in speech identification, particularly under adverse listening conditions. Furthermore, such negative effects may persist for 4 years or even more after an attack of OM. 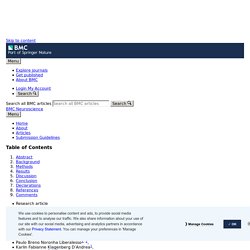 We showed that this relatively short period of sleep deprivation significantly impaired CAP in both males and females. More specifically, the increase in the average time needed to identify the interval of silence between paired sound stimuli in the RGDT that was observed following sleep deprivation demonstrated a negative impact of sleep deprivation on temporal resolution ability. Additionally, the decrease in SSWT performance observed in the 24hSD condition relative to the BSL condition indicates that 24 hours of sleep deprivation impaired the participants’ ability to transfer auditory information between the cerebral hemispheres via the posterior portions of the corpus callosum [21]. Electrical brain imaging evidences left auditory cortex involvement in speech and non-speech discrimination based on temporal features. ERP correlates of German Sign Language processing in deaf native signers. Participants Fifteen Deaf native signers (≥85db Hearing level (HL) in each ear except for one participant who had a decibel loss of ≥ 70 db HL in the left ear) participated in the experiment. 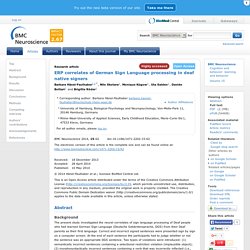 Three participants had to be excluded from further analyses since they did not reach the criterion of at least 60% correct responses in all experimental conditions. Additionally, one participant was excluded because the EEG data set was contaminated by excessive artifacts. Of the analyzed sample (6 female, 5 male; mean age: 28 years, range: 20–40 years), four participants had “mittlere Reife” (correspondent approximately to an O-level), seven had “Abitur” (A-level), and one had an university degree. The first three excluded participants had “mittlere Reife”, the fourth excluded participant did not report his highest degree of education. fMR-adaptation indicates selectivity to audiovisual content congruency in distributed clusters in human superior temporal cortex. 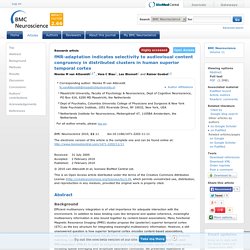 All subjects were recruited from an academic environment and had no history of reading/language problems or neurological/psychiatric disorders. All were right-handed Dutch native speakers, had normal or corrected-to-normal vision and normal hearing capacity. Subjects gave informed written consent and all procedures were approved by the local ethics committee (Faculty of Psychology, Maastricht University). Stimuli Stimuli were pairs of letters (Visual, V) and speech sounds (Auditory, A) that were presented simultaneously (vowels a, e, i, y, o, u and consonants d, k, l, n, p, r, s, t, z). Adaptation procedure. Late, not early mismatch responses to changes in frequency are reduced or deviant in children with dyslexia: an event-related potential study. The current study asked: Do children with dyslexia show differences in their mismatch responses to frequency deviants during the MMN time window using (1) conventional amplitude measures and (2) time-frequency analysis? 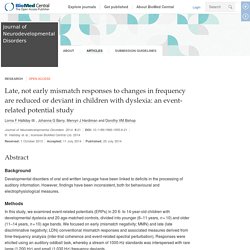 , and (3) is performance on any of these measures linked to behavioural measures of frequency discrimination, language, and literacy? We found that children with dyslexia did not differ from controls in their MMN responses to the frequency deviants and, surprisingly, that they showed greater levels of ITC (phase locking) in the time window corresponding to the MMN, particularly in the older group.

In contrast, for the LDN time window, the younger children with dyslexia showed a smaller LDN response to small deviants, whilst the older children with dyslexia showed a reduction in their event-related desynchronization to frequency deviants over the same timescale, in the form of a less negative ERSP. Long-term influence of recurrent acute otitis media on neural involuntary attention switching in 2-year-old children. 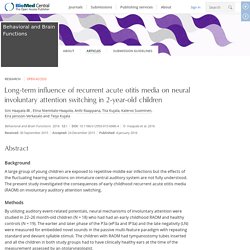 Due to challenges in diagnosing and classifying middle ear status, otitis media (OM) is commonly used as a general term for various forms of middle ear fluid and inflammation. A general definition for RAOM has been three or more episodes of acute otitis media (AOM) per 6 months or four or more AOM episodes per year [3]. After an episode of AOM, middle ear fluid is present for few days to over 2 months [4]. Fluid in the middle ear causes about 20–30 dB conductive hearing loss [5], and, especially when asymmetric, it affects interaural temporal and level difference cues compromising binaural sound localization [6]. Fluctuating hearing sensations during the development of central auditory system has been connected to atypical auditory processing [7, 8, 9, 10, 11], which can lead to problems in language acquisition [12]. Otitis media: a genome-wide linkage scan with evidence of susceptibility loci within the 17q12 and 10q22.3 regions.

Otitis media in young Aboriginal children from remote communities in Northern and Central Australia: a cross-sectional survey. This is the first study in over twenty years to document the middle ear state of young Aboriginal children from a range of remote communities in Northern and Central Australia. Unfortunately, the rates of OM (all types), TM perforation, and suppurative OM (AOM/woP, AOM/wiP or CSOM) remain extremely high. The impact of severe otitis media on hearing is likely to be significant and may contribute to poor educational and employment outcomes [18].

Phonemic and grapheme perception in Dyslexia and (Central) Auditory Processing Disorder. Pneumococcal vaccination and otitis media in Australian Aboriginal infants: comparison of two birth cohorts before and after introduction of vaccination. Study Setting Two cohorts were enrolled from three Aboriginal communities on the Tiwi islands north of Darwin (population 2,029)[15]. We compared a cohort that received pneumococcal vaccination (2001–2004) with a comparison cohort from the same communities prior to vaccine availability (1996–2001).

Participants The comparison, or before vaccine group, was enrolled in a randomised controlled trial of long-term amoxicillin versus placebo between 1996 and 2001 (OM-RCT)[16]. As subjects enrolled in the OM-RCT began randomised therapy after detection of the first OME episode, the comparison group for the time to first OME outcome included all subjects enrolled in the OM-RCT. Comparison group exclusion criteria were: age >12 months, gestation <34 weeks, penicillin sensitivity, long-term antibiotic therapy, craniofacial abnormality, CSOM and immunodeficiency[16]. Reduced resting-state brain activity in the default mode network in children with (central) auditory processing disorders. In this paper we examined resting-state brain activity in children with (C)APD, using two independent data-driven approaches: ReHo and ICA with different model order settings.

First, we should emphasize that to date there has only been one preliminary study published which aimed to develop an fMRI procedure to examine individuals with (C)APD [5]. According to the authors’ best knowledge, this is the first study which applied rs-fMRI to investigate brain activity in (C)APD. Secondly, we used two different methods (ReHo and ICA) to analyze the same data set, in order to provide a more complex picture of DMN. Speech Target Modulates Speaking Induced Suppression in Auditory Cortex. Participants Ten healthy right-handed English speaking volunteers (6 males, 4 females; mean age 25 years; range: 21–42) participated in this study. All participants gave their informed consent after procedures had been fully explained.

The study was performed with the approval of the University of California, San Francisco Committee for Human Research. Experimental Design and Procedure Calibration of the acoustic stimuli was conducted prior to starting the experiment to ensure that the volume through the earphones was equivalent in both speak and listen tasks. The experiment went as follows: participants viewed a projection monitor.

Figure 6. A key feature of the experiment design related to analysis of the results is that the experiment is fundamentally a comparison between the speaking and listening conditions. A structural magnetic resonance image (MRI) was obtained for each participant at the Magnetic Resonance Science Center of UCSF. Temporal Auditory Processing and Phonological Awareness in Children with Benign Epilepsy with Centrotemporal Spikes. The clinical course of acute otitis media in high-risk Australian Aboriginal children: a longitudinal study.

The effects of background white noise on memory performance in inattentive school children.