Journal of a Cosmic Anthropologist. (META) SYNC LOG: CARGO CULTS OF THE FUTURE. Meta Intro: On Sync Logs Themselves First a word or two about sync logs (and a reminder of what Sync is short for) Synchronicity is a concept first explained by psychiatrist Carl Jung, which holds that events are “meaningful coincidences” if they occur with no causal relationship, yet seem to be meaningfully related. 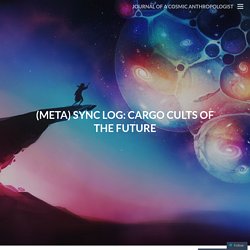 We commence our wandering then with Gordon’s post Super-Asymmetry: YOU TELL ME: SCIENTIST CLAIMS TO HAVE FOUND SPECIAL LENSES THAT ALLOW YOU TO SEE "INVISIBLE ENTITIES" Now, this one I'm so extremely skeptical of, that you may be wondering why I'm blogging about it at all. 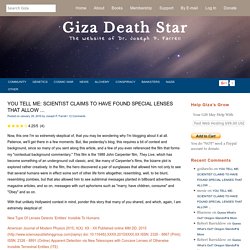 Patience, we'll get there in a few moments. But, like yesterday's blog, this requires a bit of context and background, since so many of you sent along this article, and a few of you even referenced the film that forms my "contextual background commentary. " This film is the 1988 John Carpenter film, They Live, which has become something of an underground cult classic, and, like many of Carpenter's films, the bizarre plot is explored rather creatively. In the film, the hero discovered a pair of sunglasses that allowed him not only to see that several humans were in effect some sort of other life form altogether, resembling, well, to be blunt, resembling zombies, but that also allowed him to see subliminal messages planted in billboard advertisements, magazine articles, and so on, messages with curt aphorisms such as "marry, have children, consume" and "Obey" and so on.

Joseph P. Robert Greene, the First Bohemian. Known for his debauched lifestyle, his flirtations with criminality, and the sheer volume of his output, the Elizabethan writer Robert Greene was a fascinating figure. 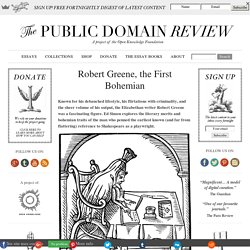 Ed Simon explores the literary merits and bohemian traits of the man who penned the earliest known (and far from flattering) reference to Shakespeare as a playwright. The only known image of the dramatist, poet, pamphleteer, and initially unrepentant libertine Robert Greene is a woodcut from John Dickenson’s Greene in Conceipt, printed in 1598, five years after its subject had died an early death at the age of thirty-four. Dickenson’s book pretends to be a posthumous publication of the still infamous raconteur, bawd, and wit; the frontispiece depicts Greene as bundled up in his death shroud, a cloth top-not twisted off at the peak of his head. Wounded Warrior Project Spends Lavishly on Itself, Insiders Say.

Photo JACKSONVILLE, Fla. — In 2014, after 10 years of rapid growth, the Wounded Warrior Project flew its roughly 500 employees to Colorado Springs for an “all hands” meeting at the five-star Broadmoor hotel. 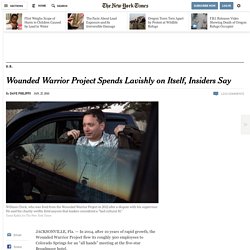 They were celebrating their biggest year yet: $225 million raised and a work force that had nearly doubled. On the opening night, before three days of strategy sessions and team-building field trips, the staff gathered in the hotel courtyard. Welcome To America — Now Spy On Your Friends. What Kind of Person Majors in Business? They say it doesn't matter what you major in during college. 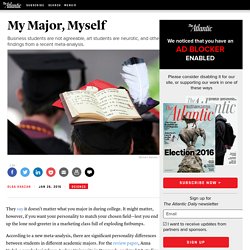 It might matter, however, if you want your personality to match your chosen field—lest you end up the lone nod-greeter in a marketing class full of exploding fistbumps. According to a new meta-analysis, there are significant personality differences between students in different academic majors. For the review paper, Anna Vedel, a psychologist from Aarhus University in Denmark, analyzed 12 studies examining the correlation between personality traits and college majors. Eleven of them found significant differences between majors. The review examined the so-called “Big Five” traits: neuroticism, extraversion, openness to experience, agreeableness, and conscientiousness. Buckminster Fuller: Why You Should NOT Earn A Living! By Gregg Prescott, M.S. 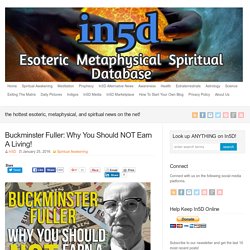 Editor, In5D.com The following is a quote from Buckminster Fuller as quoted from the March 30, 1970 issue of the New York Magazine: We must do away with the absolutely specious notion that everybody has to earn a living. Iran: Matthew Trevithick on Evin Prison and Release. Why So Many Rich Kids Come to Enjoy the Taste of Healthier Foods. Broccoli is nutritious, and it knows it. 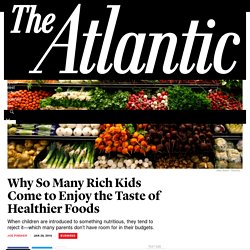 Since humans and other plant-eating animals have reason to consume a lot of broccoli, it has come to produce goitrin, a compound that tastes very bitter to people with a certain gene—which serves as a (meager) defense against getting eaten. Other vegetables that come from the very same plant, including kale, brussels sprouts, and collard greens, all employ a similar protective strategy. But broccoli’s flavor armor can be actually quite effective, as evidenced by many kids’ disgusted reaction to tasting it for the first time.

But those kids can learn to like it, eventually: One 1990 study found that kids need to be presented with unknown foods somewhere between eight and 15 times before they come to accept them. Monks & Magic: Buddhism and the Supernatural in Thailand. In August 2008 Bun Rany, the wife of the Cambodian Prime Minister Hun Sen, led Buddhist monks and so... 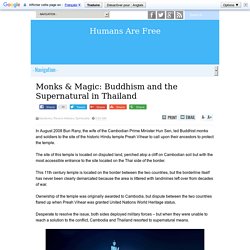 In August 2008 Bun Rany, the wife of the Cambodian Prime Minister Hun Sen, led Buddhist monks and soldiers to the site of the historic Hindu temple Preah Vihear to call upon their ancestors to protect the temple. The site of this temple is located on disputed land, perched atop a cliff on Cambodian soil but with the most accessible entrance to the site located on the Thai side of the border. This 11th century temple is located on the border between the two countries, but the borderline itself has never been clearly demarcated because the area is littered with landmines left over from decades of war. Oxytocin Bliss: The Super Intelligence Coded in Your Hormones. 26th January 2016 By Indra Contributing Writer for Wake Up World We seek bliss continually, constantly craving and desiring, because we – with our coming into existence on this gorgeous blue planet – inherit a programming of our minds that leads us to believe that we have to leave our natural, universal connection, and plug into the man-made systems in order to achieve bliss. 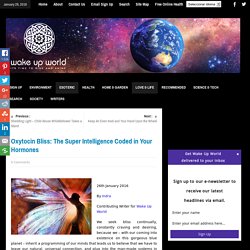 I’ll give you a few examples: Ever heard of somebody chasing higher levels of success, the one true love, more money, a perfect body, or a bigger house in the pursuit of happiness, only to discover that the sense of relief and joy they were seeking did not set in? Homeopathy – or where I lose some readers.

There were two prompts for this post: a few headlines of articles regarding the possibility of homeopathy being banned or made illegal in the United Kingdom and a relatively recent Facebook friend add of a homeopath who saved my sanity some years back. 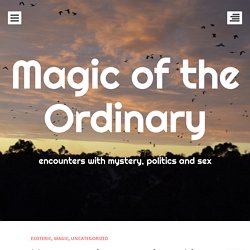 More on that later. Now, I don’t like the idea of such a noble art, and one that is so powerful when used correctly, being banned so I felt I had to say something. Many people I know and respect will likely think homeopathy is hokum at best or dangerous garbage at worse. No probs there, that’s quite logical, as it clear homeopathic remedies contain nothing physical that may promote health (or equally cause ill).

Take the example of what is known as ‘crisis apparition’ – when a person undergoing a sudden emotional trauma (such as death or a violent accident) manifests in another place to someone who is emotionally in tune with him or her. (There have been many confirmed cases of this in wartime, when a woman has ‘seen’ a husband or son at the moment when he is killed in action.) What’s Really Going on with Oil? If there is any single price of any commodity that determines the growth or slowdown of our economy, it is the price of crude oil. Too many things don’t calculate today in regard to the dramatic fall in the world oil price. In June 2014 major oil traded at $103 a barrel. With some experience following the geopolitics of oil and oil markets, I smell a big skunk. Let me share some things that for me don’t add up. On January 15 the US benchmark oil price, WTI (West Texas Intermediate), closed trading at $29, the lowest since 2004. 6 Frequencies Used by Ancient Cultures to Heal and Connect to the Divine.

The curriculum of Quareia goes into great practical and technical depth of all magical technique, and for the most part is magical education that does not appear in any books, anywhere. This is the training that is normally behind closed doors. O.T.O. U.S.A. Library. Internet Sacred Text Archive Home. Occult Arts a Big Success in NYC — Eris Magazine. The World As We Know It Has Changed & There Is No Going Back To What We Were. By Michael Forrester Just over four years ago, we passed a portal to the unknown. Debt Dodgers: Meet the Americans Who Moved to Europe and Went AWOL on Their Student Loans.

All photos by the author It's difficult to overstate how crushing America's student loan debt situation is. The “Other Side” Is Not Dumb. The “Other Side” Is Not Dumb There’s a fun game I like to play in a group of trusted friends called “Controversial Opinion.” The rules are simple: Don’t talk about what was shared during Controversial Opinion afterward and you aren’t allowed to “argue” — only to ask questions about why that person feels that way.

UFOs and Alien Abductions: What Is the Truth? The first modern sighting of a UFO (Unidentified Flying Object) occurred two days before my sixteenth birthday, on June 24, 1947. Kenneth Arnold, a businessman, was flying his private plane near Mount Rainier in Washington State when he saw nine shining discs moving against the background of the mountain. Meeting in the Dream World: Oneironauticum. Expand Your Mind Through Dreaming. Daily Message ~ Thursday January 21, 2016. Daily Message ~ Friday January 22, 2016. On the Borderlands between Philosophy and Esotericism: An Interview with Gary Lachman — Jean Gebser Society. G.L. All the debt in the world could be instantly abolished. Audio Player Saul Audio Blog for TuesdayJanaury 19th. Charmed, I'm Sure. Disentangling "will" Circle Thrice: Magical Eating in a Mundane World.