"Early to bed and early to rise makes a man healthy, wealthy, and wise." — Poor Richard's Almanac (by Benjamin Franklin, 1735)

Up and at 'Em: 4 A.M. Risers May Have Quirky Chronobiology. In 2016, the Wall Street Journal did a profile of Apple Computer's C.E.O., Tim Cook, which described his daily habit of waking up every day at 3:45 A.M. with an up and at 'em, seize the day attitude. article continues after advertisement With Cook as their new very-early-to-rise poster boy, the WSJ headline declared, "Why 4 A.M. 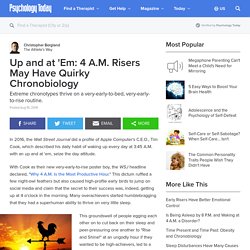 Is the Most Productive Hour. " This dictum ruffled a few night-owl feathers but also caused high-profile early birds to jump on social media and claim that the secret to their success was, indeed, getting up at 4 o'clock in the morning. Many overachievers started humblebragging that they had a superhuman ability to thrive on very little sleep. Source: Sari ONeal/Shutterstock This groundswell of people egging each other on to cut back on their sleep and peer-pressuring one another to "Rise and Shine! " Earlier this summer, The New York Times jumped on the bandwagon of warning about the backlash of very-early-to-rise routines with an article, "Waking Up at 4 A.M. Waking Up at 4 A.M. Every Day Is the Key to Success. Or to Getting a Cold. Tim Cook, the C.E.O. of Apple, rises a little before 4 a.m. every day. 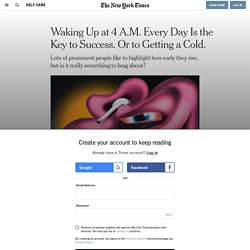 President Trump wrote in his 2004 book that he only needs four hours of sleep a night. David Cush, the former Virgin America C.E.O., has said that he wakes up at 4:15. And Jennifer Aniston wakes up at around 4:30 to meditate, as does Kris Jenner, the same time that Michelle Obama is hitting the gym. Recently, Steve Harvey declared: “Rich people don’t sleep eight hours a day.” Is the key to success emulating high-profile achievers who are hacking their bodies to increase productivity? Americans sleep, on average, less than seven hours a night, which means that many of us get less sleep than the American Academy of Sleep Medicine recommends. The Miracle Morning: The Not-So-Obvious Secret Guaranteed to Transform Your Life (Before 8AM) by Hal Elrod. How to Wake Up Early: What to Do When You've Tried Everything. Source: PicJumbo. 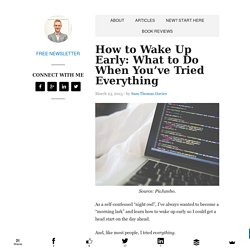 As a self-confessed “night owl”, I’ve always wanted to become a “morning lark” and learn how to wake up early so I could get a head start on the day ahead. And, like most people, I tried everything. Alarm clock on the other side of the room? Check. Create a morning playlist? Use a sleep-tracking app? I tried everything – but nothing worked in the long-term. 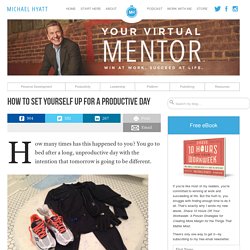 You go to bed after a long, unproductive day with the intention that tomorrow is going to be different. Before you know it, it is time to eat lunch and you can’t point to one significant thing you’ve accomplished. The Morning Routine Experts Recommend For Peak Productivity. What’s the best way to start your day so that you really get things done? 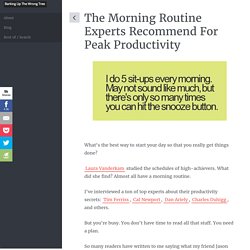 Laura Vanderkam studied the schedules of high-achievers. What did she find? Almost all have a morning routine. I’ve interviewed a ton of top experts about their productivity secrets: Tim Ferriss, Cal Newport, Dan Ariely, Charles Duhigg, and others. But you’re busy. So many readers have written to me saying what my friend Jason always does: “I don’t have time. Okay, time to round up what the experts have said and build a roadmap. 1) Stop Reacting Get up before the insanity starts. When I spoke to productivity guru Tim Ferriss, bestselling author of The 4-Hour Workweek, what did he say? Here’s Tim: I try to have the first 80 to 90 minutes of my day vary as little as possible. Most of us get up and it seems like things are already in motion. So of course you aren’t achieving your goals. You need to wake up before the insanity starts. (For more from Tim Ferriss on what the most productive people do every day, click here.)