Satoshi chose to be anonymous, which fit the ethos of the Cypherpunks. People can project hopes and dreams on an anonymous individual, ensuring maximal narrative fit. That’s why a book is often better than the movie.

His anonymity was a critical component of the founder story — dev worship is a dangerous thing for an open source project aiming for decentralization. Volunteers need to rely on trusting the objective reality of the code, rather than focusing on the merits of the project leader. Calling Bitcoin a NSA/CIA Project Is Disrespectful to Cypherpunks – The Bitcoin Takeover. I’ve recently asked my Twitter followers to mention their favorite Bitcoin conspiracy theory. 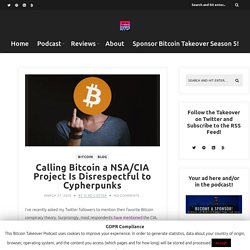 Surprisingly, most respondents have mentioned the CIA, the NSA, or another “three-letter agency” as the potential creators of the cryptocurrency. Deater Bob suggested that Satoshi Nakamoto might have leaked the Bitcoin project from sources within the US government. Gilroy pointed out to a master plan that would eventually use Satoshi’s coins as the foundation for a new US treasury. The likes of Juan Galt and Jack have also suggested that the NSA might have been involved. And in spite of some creative replies (such as Wladimir Van Der Laan’s theory about Bitcoin being a fungus and Bmo Masari’s suggestion that the internet itself might have attained consciousness in order to create Bitcoin), I couldn’t stop thinking about the popular associations between the creation of Bitcoin and governmental agencies.

However, there is a cypherpunk tradition that precedes Satoshi’s emergence by 20+ years. Credible Neutrality As A Guiding Principle. "Bitcoin never been named as a "currency" by the creator(s)" Planting Bitcoin — Gardening (4/4) Planting Bitcoin — Soil (3/4) The Cypherpunks Introduction In my last article, “Season,” I covered the precise moment in which Satoshi planted Bitcoin, the 2008 Financial Crisis. 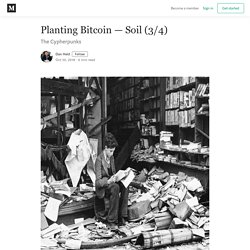 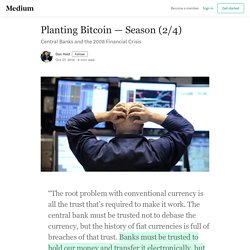 Planting Bitcoin — Species (1/4) (The sections below, on the attributes that make for a sound money, are largely borrowed from Vijay Boyapati’s article “The Bullish Case for Bitcoin”) Verifiable Fiat currencies and gold are fairly easy to verify for authenticity. 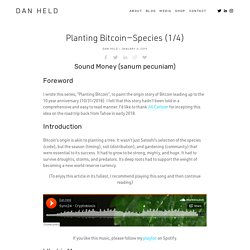 However, despite providing features on their banknotes to prevent counterfeiting, nation-states and their citizens still face the potential to be duped by counterfeit bills. Gold is also not immune from being counterfeited. Sophisticated criminals have used gold-plated tungsten as a way of fooling gold investors into paying for false gold. Fungible Gold provides the standard for fungibility. Portable Bitcoins are the most portable store of value ever used by man. Durable. Game Theory and Cryptocurrencies. Game theory is fundamental to the development of cryptocurrencies and is one of the reasons why Bitcoin managed to thrive for over a decade, despite numerous attempts to disrupt the network. 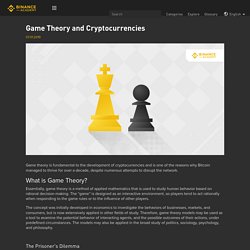 What is Game Theory? Essentially, game theory is a method of applied mathematics that is used to study human behavior based on rational decision-making. The “game” is designed as an interactive environment, so players tend to act rationally when responding to the game rules or to the influence of other players. The concept was initially developed in economics to investigate the behaviors of businesses, markets, and consumers, but is now extensively applied in other fields of study. Therefore, game theory models may be used as a tool to examine the potential behavior of interacting agents, and the possible outcomes of their actions, under predefined circumstances. Satoshi solved the Byzantine General’s Problem. Does Satoshi have a million bitcoin? Abstract: We examine the extent to which one miner dominated Bitcoin in 2009. 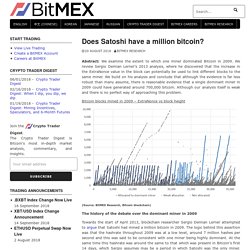 We review Sergio Demian Lerner’s 2013 analysis, where he discovered that the increase in the ExtraNonce value in the block can potentially be used to link different blocks to the same miner. We build on his analysis and conclude that although the evidence is far less robust than many assume, there is reasonable evidence that a single dominant miner in 2009 could have generated around 700,000 bitcoin. Although our analysis itself is weak and there is no perfect way of approaching this problem. Bitcoin blocks mined in 2009 – ExtraNonce vs block height (Source: BitMEX Research, Bitcoin blockchain) The Satoshi, the smallest unit of Bitcoin, is getting its own symbol.

Square App started a mass movement on Twitter asking its followers to submit designs for a new symbol for increments of Bitcoin, the satoshi. 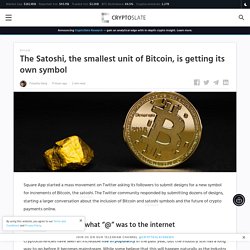 The Twitter community responded by submitting dozens of designs, starting a larger conversation about the inclusion of Bitcoin and satoshi symbols and the future of crypto payments online. Satoshi is to crypto what “@” was to the internet Cryptocurrencies have seen an incredible rise in popularity in the past year, but the industry still has a long way to go before it becomes mainstream. While some believe that this will happen naturally as the industry matures, others take a more proactive stance and believe the community must work on raising awareness about cryptocurrencies and their use.

For a cryptocurrency to become a household name, people have to associate it with familiar metaphors and its potential uses. Coming up with a functional satoshi symbol However, not everyone was happy with that design. Like what you see? Sign up to stay informed. Nakamoto Institute (@NakamotoInst) / Twitter.