"Where the will contracts the spirit, attention expands it." Simon Weil

"In short, belief in free will stresses the important role of willpower or self-control in treatment for addiction.

In sum, when people believe in free will, they behave better than when they disbelieve in it. Those who believe more strongly in their own free will are better able to learn from their mistakes, rather than submitting passively to failure." Roy Baumeister. Plato’s Two Charioteers: Free Will, Moral Agency, and How to Negotiate Our Capacities for Good and Evil. “If I conclude that there is no free will,” astrophysicist Janna Levin observed in her spectacular conversation with Krista Tippett, “it doesn’t mean that I should go run amok in the streets. 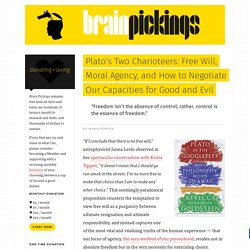 I’m no more free to make that choice than I am to make any other choice.” This seemingly paradoxical proposition counters the temptation to view free will as a purgatory between ultimate resignation and ultimate responsibility, and instead captures one of the most vital and vitalizing truths of the human experience — that our locus of agency, the very seedbed of our personhood, resides not in absolute freedom but in the very necessity for exercising choice. Goldstein, who grew up enamored with science fiction, weaves into her philosophical inquiry fictionalized dialogues in which Plato converses with contemporary people he encounters in various contexts — from a cable news interview to a 92Y panel — exploring ideas based on his actual ancient dialogues.

Hannah Arendt on Memory, the Elasticity of Time, and What Free Will Really Means. Since 1888, the annual Gifford Lectures series has aimed “to promote and diffuse the study of natural theology in the widest sense of the term” by bringing together influential thinkers across science, philosophy, and spirituality — luminaries like William James, Werner Heisenberg, Niels Bohr, and Carl Sagan (whose 1985 lecture was later published as the fantastic posthumous volume Varieties of Scientific Experience).

But for nearly a century, the Gifford Lectures remained a bona fide boys’ club. It wasn’t until 1973 that German-American political theorist Hannah Arendt (October 14, 1906–December 4, 1975) became the first woman to speak at the prestigious event. Her exquisite lecture was later expanded and published as The Life of the Mind (public library) — an intensely intelligent and stimulating exploration of such seemingly simple, immeasurably complex questions as how we think, why our inner lives eclipse the world of appearances, and what it really means to live with freedom.

C.S. Lewis on Suffering and What It Means to Have Free Will in a Universe of Fixed Laws. If the universe operates by fixed physical laws, what does it mean for us to have free will? 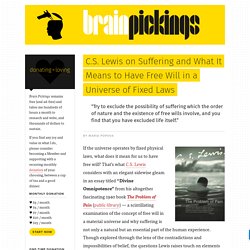 That’s what C.S. Lewis considers with an elegant sidewise gleam in an essay titled “Divine Omnipotence” from his altogether fascinating 1940 book The Problem of Pain (public library) — a scintillating examination of the concept of free will in a material universe and why suffering is not only a natural but an essential part of the human experience. Though explored through the lens of the contradictions and impossibilities of belief, the questions Lewis raises touch on elements of philosophy, politics, psychology, cosmology, and ethics — areas that have profound, direct impact on how we live our lives, day to day. To be sure, Lewis’s own journey of spirituality was a convoluted one — he was raised in a religious family, became an atheist at fifteen, then slowly returned to Christianity under the influence of his friend and Oxford colleague J.R.R. 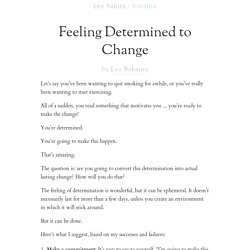 All of a sudden, you read something that motivates you … you’re ready to make the change! You’re determined. You’re going to make this happen. That’s amazing. The question is: are you going to convert this determination into actual lasting change? The feeling of determination is wonderful, but it can be ephemeral. But it can be done. Here’s what I suggest, based on my successes and failures: Make a commitment: It’s easy to say to yourself, “I’m going to make this change” but then let yourself off the hook when things get tough or you get busy or stressed. If you put these ideas into action (and you’re determined, so you will!)