Rejection Sensitivity: Do We Really Get What We Put Out? 10 Lessons Learned from 100 Days of Rejection. Source: Flickr/Tiffa Day Success in life and work requires you lean into fear, put yourself out there and deal with the consequences. 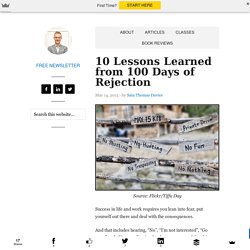 And that includes hearing, “No”, “I’m not interested”, “Go away” and, “Your application has been unsuccessful at this time”. Let’s face it: whether you’re asking someone out on a date, applying for a job or selling a product or service, rejection is hard to deal with. But what if you actively sought it out? Enter Jia Jiang In 1997, Jia Jiang relocated to the United States with a dream: to become the next Bill Gates. But despite a successful career in IT, he was unfulfilled. He wanted to be an entrepreneur. So Jiang made the leap. But money was tight and when his financial backer pulled out, that was the final straw. He was crushed. “When you invest in a startup, you’re really investing in the people, especially the CEO,” writes Jiang in his new book Rejection Proof. …And he needed to do something about it. His solution? And that was only the beginning. Conclusion. What I learned from 100 days of rejection. Surprising Lessons From 100 Days of Rejection. 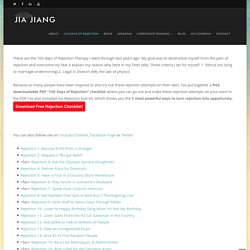 My goal was to desensitize myself from the pain of rejection and overcome my fear (I explain my reason why here in my TedX talk). Three criteria I set for myself: 1. Ethical (no lying or marriage-undermining) 2. Legal 3. You Only Have To Succeed Once: The Cartoonist Who Was Rejected 609 Times. There’s nothing like the feeling of being recognized by someone you admire—the validation you get learning someone you respect also respects you. 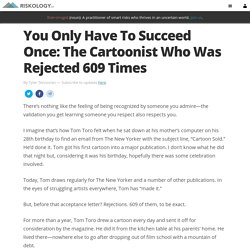 I imagine that’s how Tom Toro felt when he sat down at his mother’s computer on his 28th birthday to find an email from The New Yorker with the subject line, “Cartoon Sold.” He’d done it. Tom got his first cartoon into a major publication. I don’t know what he did that night but, considering it was his birthday, hopefully there was some celebration involved. Today, Tom draws regularly for The New Yorker and a number of other publications. But, before that acceptance letter?

For more than a year, Tom Toro drew a cartoon every day and sent it off for consideration by the magazine. Imagine yourself in Tom’s shoes—completely changing your life path, working through bouts of extreme depression, and bills piling up as fast as the rejection letters from the people who held his future in their hands. Most of us wouldn’t have the stomach for it. Stop Pretending Rejection Is Just The First Part Of A Story With A Happy Ending.

I woke up this morning to my first viral tweet. 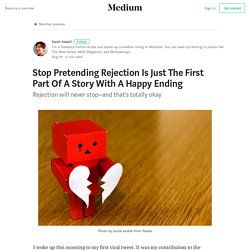 It was my contribution to the #ShareYourRejections hashtag on Twitter, where writers and other artists were sharing their stories of hearing “no” professionally. Many of the most popular stories on the #ShareYourRejections thread were from noted artists sharing their eventual stories of success: But, honestly, as much as these women are wonderful and talented and inspirational, I didn’t feel like they were telling the full story, or the real story of how rejection functions in the lives of professional artists.

Rejection. Fear of Failure. Receive Criticism. 5 Ways Mentally Strong People Bounce Back From Rejection. 5 Surprising Tips for Taking the Sting out of Rejection. Fear Of Rejection: 2 Ways To Beat It, Backed By Research. We all deal with fear of rejection. 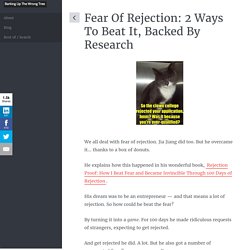 Jia Jiang did too. But he overcame it… thanks to a box of donuts. He explains how this happened in his wonderful book, Rejection Proof: How I Beat Fear and Became Invincible Through 100 Days of Rejection. His dream was to be an entrepreneur — and that means a lot of rejection. So how could he beat the fear? By turning it into a game. And get rejected he did. Knocking on a stranger’s door, ball in hand, he asked “Can I play soccer in your backyard?” Here’s his TEDx talk. Pretty cool story, huh? But by studying Jia’s experiment and the science behind rejection, what can we learn to help us overcome our fears, cope with the inevitable “NO” responses and get what we want in life? A lot, actually. (Please don’t stop reading now. Yes, Rejection Is *Very* Powerful So let’s say you tried to join the KKK. Actually, the research says you might still feel bad: Crazy, huh? Studies show your brain doesn’t distinguish between physical pain and emotional pain.

20 Things to Remember When Rejection Hurts. Be OK with walking away… Rejection teaches you how to reject what’s not right for you. 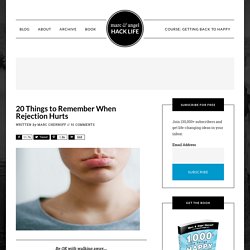 As you look back on your life, you will realize that many of the times you thought you were being rejected from someone or something you wanted, you were in fact being redirected to someone or something you needed. Seeing this when you’re in the midst of feeling rejected, however, is quite tough. I know because I’ve been there. As soon as someone critiques, criticizes, and pushes you away – as soon as you are rejected – you find yourself thinking, “Well, that proves once again that I’m not worthy.” What you need to realize is, the other person or situation is NOT worthy of YOU and your particular journey.