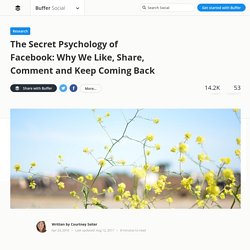 Despite my best intentions to stay on track and accomplish my goal, I get sucked in. Suddenly I’m checking my own notifications, looking at what’s been recently posted and generally forgetting why I came to Facebook in the first place. This isn’t entirely by accident. New Study Suggests Giving Up Facebook Will Make You Happier. Are you strong enough to take a break? 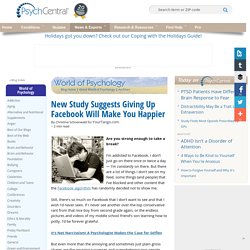 I’m addicted to Facebook. I don’t just go on there once or twice a day — I’m constantly on there. But there are a lot of things I don’t see on my feed, some things (and people) that I’ve blocked and other content that the Facebook algorithm has randomly decided not to show me. Still, there’s so much on Facebook that I don’t want to see and that I wish I’d never seen.

If I never see another over-the-top conservative rant from that nice boy from second grade again, or the endless pictures and videos of my middle school friend’s son learning how to potty, I’d be forever grateful. This is Why You Should Quit Facebook For One Week. Psychologists tested the effect of a week-long break from Facebook on people’s mental health. 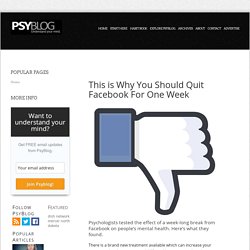 Here’s what they found. There is a brand new treatment available which can increase your concentration, boost your social life and increase your happiness. What Your Facebook Posts Say About Your Personality. Social Networking Service. Facebook Marketing. 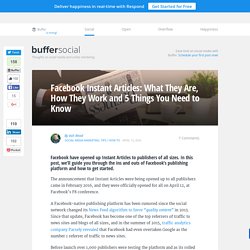 In this post, we’ll guide you through the ins and outs of Facebook’s publishing platform and how to get started. The announcement that Instant Articles were being opened up to all publishers came in February 2016, and they were officially opened for all on April 12, at Facebook’s F8 conference. A Facebook-native publishing platform has been rumored since the social network changed its News Feed algorithm to favor “quality content” in 2013. Since that update, Facebook has become one of the top referrers of traffic to news sites and blogs of all sizes, and in the summer of 2015, traffic analytics company Parsely revealed that Facebook had even overtaken Google as the number 1 referrer of traffic to news sites.

How to Create a Facebook Group (and Build an Engaged Community) Facebook has recently launched Groups for Pages, enabling the 70 million+ Pages on Facebook to create their own unique communities and feeds. 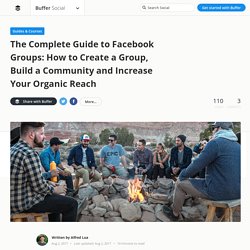 This update provides new ways for brands to boost engagement and could go some way to countering the decline in organic reach Facebook Page owners have been experiencing for the past few years. More than 1 billion people around the world use Groups. Facebook tips. 11 Facebook Tips, Tricks and Facts You Probably Don't Already Know. Over 1.5 billion people regularly use Facebook. 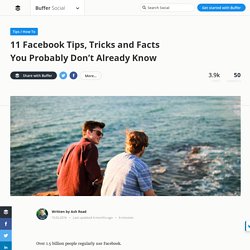 And as the social network has grown, the rate at which Facebook shares news, and releases new features and products has accelerated. It can be a little hard to keep up sometimes. With this in mind, I’d love to share 11 Facebook tips, tricks, and facts with you. And the threat to democracy [ TED Talk : Carole Cadwalladr ]