Lessons From The Tech Bubble. Asset price bubbles. Economic bubble. Because it is often difficult to observe intrinsic values in real-life markets, bubbles are often conclusively identified only in retrospect, once a sudden drop in prices has occurred. 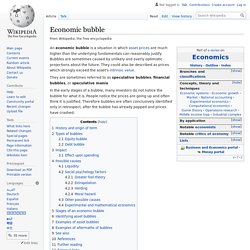 Such a drop is known as a crash or a bubble burst. Both the boom and the burst phases of the bubble are examples of a positive feedback mechanism, in contrast to the negative feedback mechanism that determines the equilibrium price under normal market circumstances. Prices in an economic bubble can fluctuate erratically, and become impossible to predict from supply and demand alone. While some economists deny that bubbles occur,[6][page needed] the cause(s) of bubbles remains disputed by those who are convinced that asset prices often deviate strongly from intrinsic values. More recent theories of asset bubble formation suggest that these events are sociologically driven. History and origin of term[edit] Impact[edit] Political economist Robert E. Effect upon spending[edit] Possible causes[edit] Herding[edit] When Does a Bubble Become a Bubble? In July 2010, Bitcoin was trading at 5 cents. 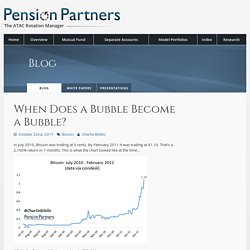 By February 2011 it was trading at $1.10. That’s a 2,100% return in 7 months. This is what the chart looked like at the time… What’s the first word that comes to mind? Bubble. Indeed, and over the next two months that bubble would burst, as Bitcoin declined nearly 50% to a low of 56 cents. And then, this happened: Bitcoin came right back, advancing another 2,801% above its February 2011 peak to $31.91 by June 2011. What does that chart look like to you? Bitcoin would crash 94% from its peak in June 2011 and the Economist did a postmortem: “the currency’s rise was the result of a speculative bubble.” 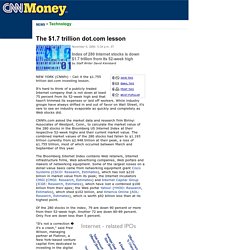 It's hard to think of a publicly traded Internet company that is not down at least 75 percent from its 52-week high and that hasn't trimmed its expenses or laid off workers. While industry groups have always drifted in and out of favor on Wall Street, it's rare to see an industry evaporate as quickly and completely as Web stocks did. CNNfn.com asked the market data and research firm Birinyi Associates of Westport, Conn., to calculate the market value of the 280 stocks in the Bloomberg US Internet Index at their respective 52-week highs and their current market value.

The combined market values of the 280 stocks had fallen to $1.193 trillion currently from $2.948 trillion at their peak, a loss of $1.755 trillion, most of which occurred between March and September of this year. Of the 280 stocks in the index, 79 are down 90 percent or more from their 52-week high. The boom in Internet IPOs Each day more bad news. The biotech boom - Feb. 22, 2000. Biotech: Popping the Allegations of a Bubble. There’s a popular view going around these days that biotech is in a bubble. 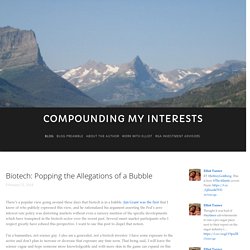 Jim Grant was the first that I know of who publicly expressed this view, and he rationalized his argument asserting the Fed’s zero interest rate policy was distorting markets without even a cursory mention of the specific developments which have transpired in the biotech sector over the recent past. Several smart market participants who I respect greatly have echoed this perspective. I want to use this post to dispel that notion. I’m a humanities, not science guy. I also am a generalist, not a biotech investor. Today we are undergoing another profound change and the catalyst was the mapping of the human genome. This above provides some justification for why “this time is different.” Simply put, we see none of this. So let me offer two anecdotes on price and valuation in biotech to provide some context to this discussion.

Thanks to my buddy who helped me pull this together so quickly today, you know who you are! There Never Was a Real Tulip Fever. When tulips came to the Netherlands, all the world went mad. 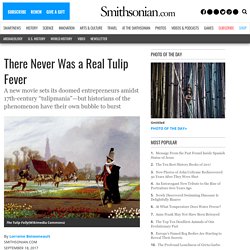 A sailor who mistook a rare tulip bulb for an onion and ate it with his herring sandwich was charged with a felony and thrown in prison. A bulb named Semper Augustus, notable for its flame-like white and red petals, sold for more than the cost of a mansion in a fashionable Amsterdam neighborhood, complete with coach and garden. As the tulip market grew, speculation exploded, with traders offering exorbitant prices for bulbs that had yet to flower. And then, as any financial bubble will do, the tulip market imploded, sending traders of all incomes into ruin. For decades, economists have pointed to 17th-century tulipmania as a warning about the perils of the free market.

The only problem: none of these stories are true. What really happened and how did the story of Dutch tulip speculation get so distorted? As the economy changed, so, too, did social interactions and cultural values. Here’s where the myth comes into play. Real Estate.