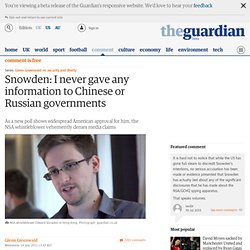 He also denied assertions that one or both governments had succeeded in "draining the contents of his laptops". "I never gave any information to either government, and they never took anything from my laptops," he said. The extraordinary claim that China had drained the contents of Snowden's laptops first appeared in the New York Times in a June 24 article. The paper published the claim with no evidence and without any attribution to any identified sources. In lieu of any evidence, the NYT circulated this obviously significant assertion by quoting what it called "two Western intelligence experts" who "worked for major government spy agencies". Chris Hayes to Greenwald: You Have a Way of Making Liberals ‘Hate You’

Glenn Greenwald, the journalist behind much of the critical reporting on the NSA, is considered to be a bit… well, abrasive, in some liberal circles. 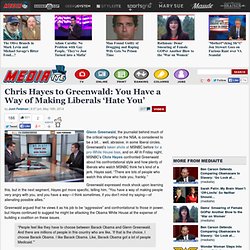 Greenwald’s taken shots at MSNBC before for a pro-White House bias, and on All In Friday night, MSNBC’s Chris Hayes confronted Greenwald about his confrontational style and how plenty of liberals who watch MSNBC think he’s kind of a jerk. Hayes said, “There are lots of people who watch this show who hate you, frankly.” Greenwald expressed mock shock upon learning this, but in the next segment, Hayes got more specific, telling him, “You have a way of making people very angry with you, and you have a way––I think sometimes, if you don’t mind my saying––of alienating possible allies.” Glenn Greenwald: the explosive day we revealed Edward Snowden's identity to the world. On Thursday 6 June 2013, our fifth day in Hong Kong, I went to Edward Snowden's hotel room and he immediately said he had news that was "a bit alarming". 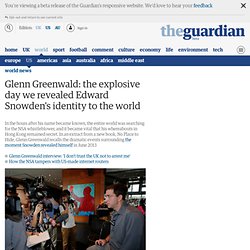 An internet-connected security device at the home he shared with his longtime girlfriend in Hawaii had detected that two people from the NSA – a human-resources person and an NSA "police officer" – had come to their house searching for him. Snowden was almost certain this meant that the NSA had identified him as the likely source of the leaks, but I was sceptical. "If they thought you did this, they'd send hordes of FBI agents with a search warrant and probably Swat teams, not a single NSA officer and a human-resources person. " I figured this was just an automatic and routine inquiry, triggered when an NSA employee goes absent for a few weeks without explanation. But Snowden suggested that perhaps they were being purposely low-key to avoid drawing media attention or setting off an effort to suppress evidence. Email exchange between Edward Snowden and former GOP Senator Gordon Humphrey. The worsening journalistic disgrace at Wired - Glenn Greenwald - Salon.com - www.salon.com.

For more than six months, Wired‘s Senior Editor Kevin Poulsen has possessed — but refuses to publish — the key evidence in one of the year’s most significant political stories: the arrest of U.S. 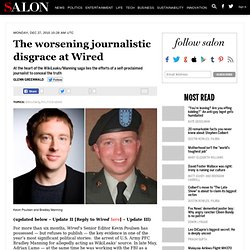 Army PFC Bradley Manning for allegedly acting as WikiLeaks’ source. In late May, Adrian Lamo — at the same time he was working with the FBI as a government informant against Manning — gave Poulsen what he purported to be the full chat logs between Manning and Lamo in which the Army Private allegedly confessed to having been the source for the various cables, documents and video that WikiLeaks released throughout this year.

This week in press freedoms and privacy rights. I'm on a (much-needed) quick vacation until Sunday, so I'll just post a few brief items from what has been a busy and important week of events, particularly when it comes to press freedom and privacy: 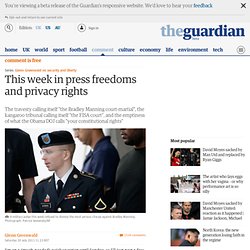 The NSA's mass and indiscriminate spying on Brazilians. I've written an article on NSA surveillance for the front page of the Sunday edition of O Globo, the large Brazilian newspaper based in Rio de Janeiro. 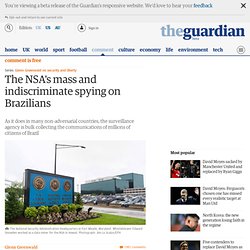 The article is headlined (translated) "US spied on millions of emails and calls of Brazilians", and I co-wrote it with Globo reporters Roberto Kaz and Jose Casado. The rough translation of the article into English is here. The main page of Globo's website lists related NSA stories: here. Glenn Greenwald: how the NSA tampers with US-made internet routers.

For years, the US government loudly warned the world that Chinese routers and other internet devices pose a "threat" because they are built with backdoor surveillance functionality that gives the Chinese government the ability to spy on anyone using them. 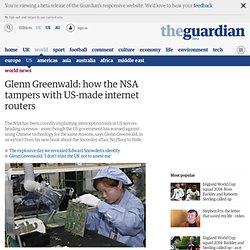 Yet what the NSA's documents show is that Americans have been engaged in precisely the activity that the US accused the Chinese of doing. The drumbeat of American accusations against Chinese internet device manufacturers was unrelenting. In 2012, for example, a report from the House Intelligence Committee, headed by Mike Rogers, claimed that Huawei and ZTE, the top two Chinese telecommunications equipment companies, "may be violating United States laws" and have "not followed United States legal obligations or international standards of business behaviour".

Nir Rosen on the "Aftermath" of America's wars - Glenn Greenwald. (updated below w/transcript – Update II) Nir Rosen, currently with NYU’s Center on Law and Security, is one of the best war journalists in the world. 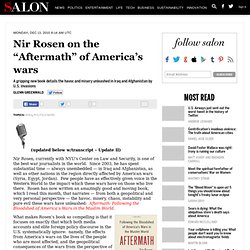 Since 2003, he has spent substantial time — always unembedded — in Iraq and Afghanistan, as well as other nations in the region directly affected by American wars (Syria, Egypt, Jordan). The predictable aftermath of the anti-CAP smear - Glenn Greenwald. I’ve written several times about the coordinated smear campaign to brand writers at the Center for American Progress as “anti-Semites” in order to punish them for defying mandated orthodoxies on Israel and to deter others from doing so. 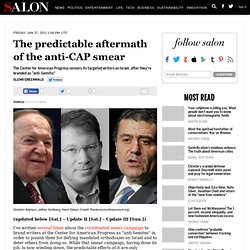 While that smear campaign, having done its job, is now winding down, the predictable effects of it are only beginning: CAP is now censoring those targeted writers, and those who defended them are now being similarly smeared. First, the self-censorship at CAP: both The Weekly Standard‘s Daniel Halper and Philip Weiss document how a post written by two of the targeted CAP writers, Ali Gharib and Eli Clifton, was censored in important, substantive ways. What's behind the scorn for Wall Street protests? - Glenn Greenwald. It’s unsurprising that establishment media outlets have been condescending, dismissive and scornful of the ongoing protests on Wall Street. 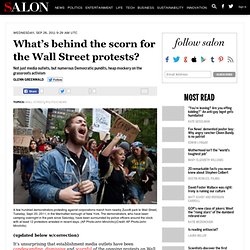 Any entity that declares itself an adversary of prevailing institutional power is going to be viewed with hostility by establishment-serving institutions and their loyalists. That’s just the nature of protests that take place outside approved channels, an inevitable by-product of disruptive dissent: those who are most vested in safeguarding and legitimizing establishment prerogatives (which, by definition, includes establishment media outlets) are going to be hostile to those challenges.

David Miranda, who lives with Glenn Greenwald, was returning from a trip to Berlin when he was stopped by officers at 8.05am and informed that he was to be questioned under schedule 7 of the Terrorism Act 2000. The controversial law, which applies only at airports, ports and border areas, allows officers to stop, search, question and detain individuals. GOP and Feinstein join to fulfill Obama's demand for renewed warrantless eavesdropping. To this day, many people identify mid-2008 as the time they realized what type of politician Barack Obama actually is.

Six months before, when seeking the Democratic nomination, then-Sen. The always-expanding bipartisan Surveillance State - Glenn Greenwald. (updated below – Update II) Democratic Party priorities - Glenn Greenwald. Much of the reaction to the article I wrote last Saturday regarding progressives, the Obama presidency and Ron Paul (as well as reaction to this essay by Matt Stoller and even this tweet from Katrina vanden Heuvel) relied on exactly the sort of blatant distortions that I began that article by anticipating and renouncing: that I was endorsing Paul as the best presidential candidate, that I was urging progressives to sacrifice reproductive rights in order to vote for him over Obama, that I “pretend[ed] that the differences between Obama and Paul on economics [and other domestic issues] are marginal”; that Paul’s bad positions negate the argument I made; that Ron Paul is my “hero,” etc. etc.

One can agree or disagree with it, of course, but there’s simply no way to fail to understand that point (or, worse, to distort it into something it isn’t) absent a desire not to understand it. Obama officials' spin on Benghazi attack mirrors Bin Laden raid untruths. Almost immediately after President Obama announced the killing of Osama bin Laden, top government officials, including then-CIA Director Leon Panetta and top terrorism adviser John Brennan, made numerous false statements about what took place.

That included the claim that Bin Laden was killed after he engaged in a "firefight", that he used his wife as a human shield to protect himself, and that he was living in luxury in a $1m mansion. None of those claims, central to the story the White House told the world, turned out to be true. The moral standards of WikiLeaks critics - Glenn Greenwald. Facts and myths in the WikiLeaks/Guardian saga - Glenn Greenwald. The Boston bombing produces familiar and revealing reactions. What rights should Dzhokhar Tsarnaev get and why does it matter?

UT Documents: Questions/responses for journalists linking to the Pando post - and other matters. Glenn Greenwald on the High Cost of Government Secrecy.