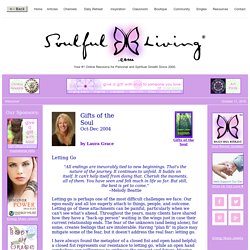 That's the nature of the journey. It continues to unfold. It builds on itself. It can't help itself from doing that. Letting go is perhaps one of the most difficult challenges we face. Organizing Family Photos in 8 Easy Steps. Next month, my husband and I will celebrate our 25th wedding anniversary. 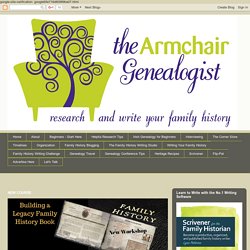 I would have to say a good portions of those 25 years – 15 at least were recorded via the old-fashioned kind of camera. The kind of camera that resulted in boxes and boxes of pictures. I was a working mother for 20 of those 25 years, days came and went and life marched on and those pictures continued to pile up. I always had big ideas, and some of the best intentions but never a plan or quite frankly the time. What do I have to show for those 25 years? That’s right, I am embarrassed. I will be the first to ewww and ahhh over a wonderfully preserved picture of an ancestor, what a treasure…and yet aren’t my pictures treasures? How to Organize Pictures. I wrote this basic guide on organizing pictures for those, who occasionally take pictures with digital cameras and who are looking for ways to organize images on their computers. 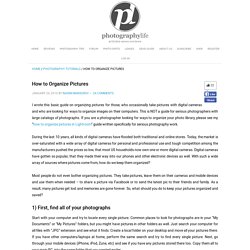 This is NOT a guide for serious photographers with large catalogs of photographs. If you are a photographer looking for ways to organize your photo library, please see my “how to organize pictures in Lightroom” guide written specifically for serious photography work. During the last 10 years, all kinds of digital cameras have flooded both traditional and online stores. Today, the market is over-saturated with a wide array of digital cameras for personal and professional use and tough competition among the manufacturers pushed the prices so low, that most US households now own one or more digital cameras.

Digital cameras have gotten so popular, that they made their way into our phones and other electronic devices as well. The Best Way to Organize a Lifetime of Photos. Home & Garden: Organizing the Attic - Week Eight (washingtonpost.com) How Can I Organize Generations of Family Photos? Tips for Organizing and Storing Photos. Hi friends! 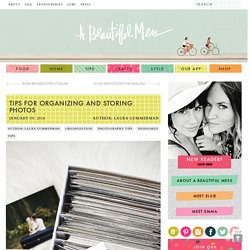 One of the most asked questions that I get is, "How do you store your photos? " I'm always intimidated by the question, because I'm not the most organized person. Saving my photos to Flickr and keeping hard drives is my method, but I know there is so much more beyond that. For that reason, I enlisted my favorite Type-A lady, Laura Gummerman, to share her methods with you. This is the start of a three part series where we will share tips for organizing, scrapbooking and displaying your photographs at home.

Hi everyone! So, when thinking about photo organization, the big question to address is, “Where should I store my photos?” How to Organize Digital Photos - Tips for Preserving Old Photos at WomansDay.com. Whenever you open the closet, you see the same boxes of photos shoved onto the top shelf. 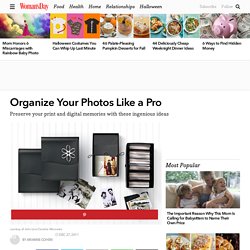 You know you should do something with them, but what? Take a weekend (or two) and get them organized. You'll be glad you did. Sort and Toss If you're daunted by the sheer number of photos you have, follow these steps to pare them down. Step 1: Gather all your print photos in one place and put them in chronological order, starting from the present and working backward. Advertisement - Continue Reading Below Step 2: Sort them into three piles: keep, toss, give to someone else. Step 3: Make digital copies of the keepers. Step 4: Now tackle the photos on your computer by downloading Google's Picasa, a free program that searches your hard drive for all photo files.

Tips to Keep Your Digital Photos Organized. Downloading photos to your computer without organizing them is the digital equivalent of stuffing printed photos into shoeboxes. 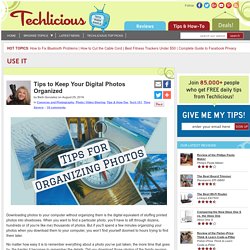 When you want to find a particular photo, you’ll have to sift through dozens, hundreds or (if you’re like me) thousands of photos. But if you’ll spend a few minutes organizing your photos when you download them to your computer, you won’t find yourself doomed to hours trying to find them later. No matter how easy it is to remember everything about a photo you’ve just taken, the more time that goes by, the harder it becomes to remember the details. Did you download those photos of the family reunion after the trip to Arizona or with the pictures from Jimmy’s birthday? And which birthday was that?

While I’d like to say that there are free, simple organizing apps, many have been discontinued. Easy Ways to Organize Your Photos. IHeart Organizing: Five Simple Tips to Organize, Print and Enjoy Your Photos! Although I am no professional, I have really grown a passion for photography. 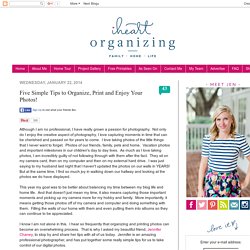 How to Organize Photos. Step 1: Download At least once a month, download photos from your camera and/or phone to your computer. 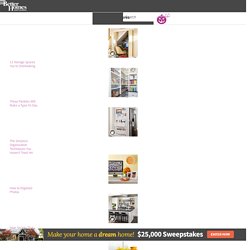 Funnel the images directly into a photo management program such as iPhoto, Picasa, or Windows Live Photo Gallery. "It's important to at least get them downloaded so your photos aren't stuck on a camera that could get stolen, damaged, or lost," says Jody Al-Saigh of Picture Perfect Organizing. Step 2: Edit, Edit, Edit. Review the photos you've downloaded on screen, deleting duplicate and poor-quality shots. Get tough on people-free scenics and repetitive party pics. Organize printed photos. Get Your Photo Life Organized in 2014 - The Photo Organizers. I don’t make resolutions! 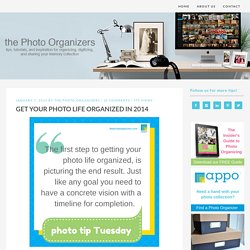 Instead, I use January to map out things I want to accomplish in the coming year. High on my list of priorities is my photo life. As a 50+ mom of adult children and former scrapbooker, my photo life is strewn about in various ways on a variety of media. What To Do With Old Photos. If you're new here, you may want to subscribe to my RSS feed. 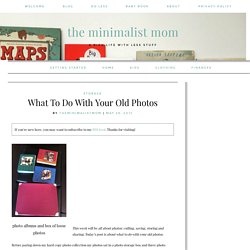 Thanks for visiting! This week will be all about photos: culling, saving, storing and sharing. Today’s post is about what to do with your old photos. Before paring down my hard copy photo collection my photos sat in a photo storage box and three photo albums. The box came with little index cards to separate and identify stacks of photos but at some point I gave up and they were all jumbled up. The photo albums were a set. In some ways the digital age saved me on this project.