Woodys Custom Wood Bicycle Fenders. Home. Ctrl One smart glasses auto tint to suit lighting conditions. A Dutch subsidiary of liquid crystal specialist AlphaMicron is turning to Indiegogo to fund the development of Ctrl One, a pair of glasses mostly targeted to cyclists and runners that can change tint from dark to transparent in a fraction of a second, automatically adapting to surrounding lighting conditions. 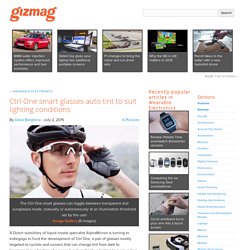 Photochromic lenses, which have been around for decades, can change their tint to dynamically fit the surrounding lighting conditions, but they usually take minutes to do so. More recently, scientists have been developing ways of changing the tint nearly instantaneously in both glass lenses and windows, using a small electric current as the trigger. Ohio-based company AlphaMicron developed such a technology (which is dubbed "e-Tint") in a way that lets the lens tint switch from transparent to sunglasses mode in just one tenth of a second. Ctrl One is being made available in five frame colors with either neutral, orange or blue lenses. Source: CTRL Eyewear. Garmin Varia bike headlight shines farther as you go faster. The faster you're going, the farther ahead you should be looking. 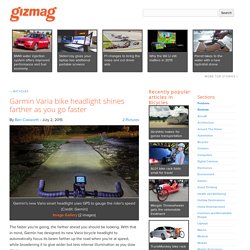 With that in mind, Garmin has designed its new Varia bicycle headlight to automatically focus its beam farther up the road when you're at speed, while broadening it to give wider but less intense illumination as you slow down. Announced at the same time as the company's Varia Rearview Bike Radar car-detecting system, the Varia "smart bike light" headlight and its accompanying tail light are designed to communicate with the user's existing GPS-equipped Garmin Edge cycle computer via the ANT+ wireless protocol. By analyzing changes in the rider's GPS coordinates, the system is able to determine their speed, and focuses or broadens the headlight beam accordingly.

When it detects that they're rapidly decelerating, it also gives the tail light a boost in intensity, turning it into a brake light. Top 5 Bike Inventions you must have. BikeSpike GPS tracker improves chances of recovering a stolen bike. Bicycles are a notoriously easy target for thieves, but technology is here to help in the form of a new device that promises to help cyclists safeguard their property and recover it if stolen. 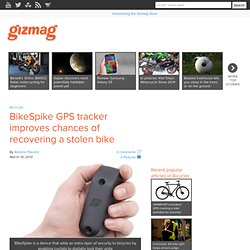 Currently seeking funds on KickStarter, the Chicago-based BikeSpike team has designed a GPS tracker that features a built-in antenna, an on-board accelerometer and a connection to a GSM mobile phone network that allows users to keep tabs on their bike via a smartphone or computer. Garmin's Varia Radar warns cyclists of traffic approaching from the rear. Garmin gave hope to many a floundering tech startup's CEO earlier this year when it purchased Ikubu Ltd in the wake of a crowdfunding campaign that came up short. 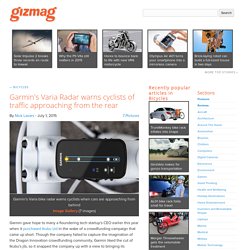 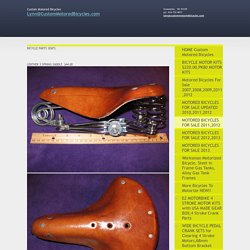 22 1/2 "inch SUSPENSION SISSY BAR $45.00$In stock SCHWINN VINTAGE 20mm=13/16"INCH WORKSMAN 22.2mm=7/8"INCH HUFFY CRANBROOK,MOST COMMON NEW SCHWINN FRAMES 25.4mm=1"INCH GT2, OP ALUMINUM 27.2mm=1 1/16"INCH During peak season emails and requests for combined shipping quotes may not receive a response.The quick way to order is order with Pay pal individually and excess postage will be refunded.﻿ To many parts to have them all on this website. Copyright 2013 Custom Motored Bicycles. Web Hosting by Yahoo! Close. RideAir takes the hard work out of roadside bike tire-pumping.

Helios' Handlebars Make Any Bike A Smart Bike. Home. Sparse Bicycle Lights by Colin Owen + Sparse. You may have had the same thing happen to you: jump on your bike for a quick ride to the store, lock it up, run in, and on your way out - your lights are gone. 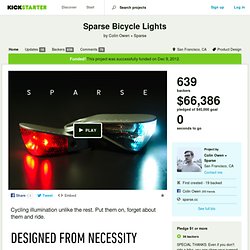 Or maybe it rained and now your lights are fried. Or maybe you're sick of stripping your lights every time you lock your bike to a post, stop in for a pint, toil in the salt mines, or attend a black-tie gala. Or maybe you simply left your lights at home as you scrambled to get out the door with bike and bag this morning. These lights were designed from the ground up to improve your ride. The lights integrate seamlessly with the visuals of the bike and the routines of daily cycling. We call it the Spacer Light since it sits beneath your stem in the stack of spacers. The Manta bicycle seat - umm... wow. First of all, let's just say it: this is the most bizarre-looking bicycle saddle of all time. 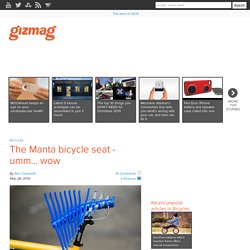 ヤマハハイブリッド自転車概念モデル 東京モーターショー ２００９. Frameblock turns a bike into its own lock. The Frameblock is a lock that's built into the frame Image Gallery (3 images) Carrying a bike lock while cycling can be a hassle, which is why some companies have started developing built-in locks. 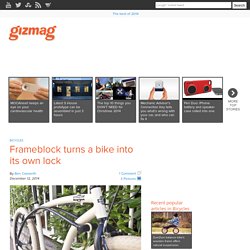 One of the latest, the Frameblock, is actually part of the frame. SPEEDrelease bike hub combines advantages of quick-release and thru-axle. The SPEEDrelease hub works with regular dropouts, equipped with an adapter For the past several decades, higher-end bicycles have utilized quick-release axles in their wheel hubs, in order to facilitate fast and easy wheel removal. 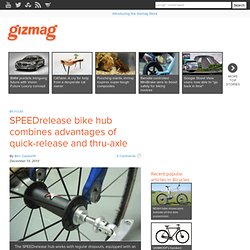 With the recent movement towards disc brakes on mountain bikes, however, some manufacturers have started using a more rigid, secure thru-axle setup. Given that discs should soon be showing up on more and more road bikes, Connecticut-based Topolino Technology recently unveiled its SPEEDrelease hub, which reportedly combines the best features of both systems in one lightweight design. Quick releases axles are very easy to use – you just slide the wheel up into the dropouts, spin the axle lever around a few turns to tighten it, then push it down to lock it. Given that the dropouts are open on the bottom, however, there's always the danger that if things aren't sufficiently tightened or lined up, the wheel could fall off in mid-ride.