Fair Share? Officials Struggle to Regulate Vermont's 'Sharing Economy' Sharing Economy Trends: The Brands Of Tomorrow! - In the world of the Internet of All things, there has never been a better time for brands to arrive as tomorrow’s publishers or studios. 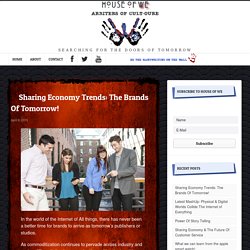 As commoditization continues to pervade across industry and sector, differentiation becomes harder and harder to achieve. As a result, the time arrives for storytelling ability to be a point of competitive advantage. In this environment as points of difference “around the what” become increasingly difficult to claim leadership around, a brand’s ability to create, delight and entertain has never been a more valuable commodity and engine of profitability and power. 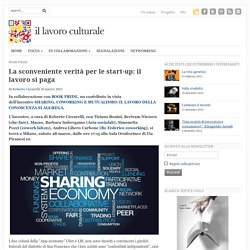 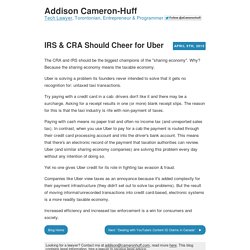 Why? Because the sharing economy means the taxable economy. Uber is solving a problem its founders never intended to solve that it gets no recognition for: untaxed taxi transactions. Try paying with a credit card in a cab: drivers don't like it and there may be a surcharge. Asking for a receipt results in one (or more) blank receipt slips. Paying with cash means no paper trail and often no income tax (and unreported sales tax).

Yet no one gives Uber credit for its role in fighting tax evasion & fraud. The sharing economy – sizing the revenue opportunity. Introducing the “Sharing S-curve” We know from looking at the development path of sectors in the economy that many exhibit an ‘S-curve’ pattern. 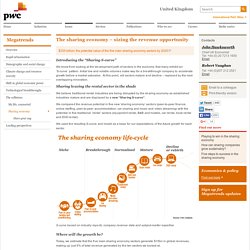 Initial low and volatile volumes make way for a breakthrough company to accelerate growth before a market saturates. At this point, old sectors mature and decline – replaced by the next overlapping innovation. Could you survive without any money at all? In a landscape of increasing austerity, financial instability and political disillusionment, the environmental freeganism lifestyle is retracing the roots of community engagement. 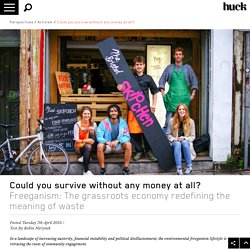 Freeganism is the practice of recycling and retrieving food and goods that have been discarded as waste and its flourishing in post-recession UK. As much a lifestyle choice as an environmental protest movement, freeganism boycotts the capitalist model of production, distribution and materialism with a focus on community, generosity, social concern and sharing. Freegans aim to limit environmental impact and minimise dependence on what is termed the ‘conventional economy’. Dumpster diving, also known as skipping, which involves recovering discarded food and goods from retail and supermarket dumpsters, is a well known practice associated with freeganism and its principles of waste minimisation.

After years of financial and political instability, these ideas are being questioned. Sharing economy benefits those with digital skills. 9th April 2015 by Debbie Wosskow The sharing economy is a high-growth sector within the global economy, which allows people to share property, resources, time via collaborative online platforms. 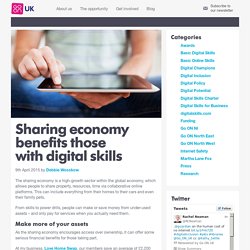 This can include everything from their homes to their cars and even their family pets. From skills to power drills, people can make or save money from under-used assets – and only pay for services when you actually need them. Will the sharing economy - the Uber's and Lyft's of the world - strike the right legal balance between empowering and exploiting workers? Il progetto di sharing economy di Expo per le mamme. 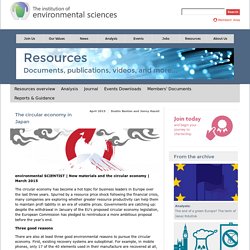 Spurred by a resource price shock following the financial crisis, many companies are exploring whether greater resource productivity can help them to maintain profi tability in an era of volatile prices. Governments are catching up: despite the withdrawal in January of the EU's proposed circular economy legislation, the European Commission has pledged to reintroduce a more ambitious proposal before the year's end.

Three good reasons There are also at least three good environmental reasons to pursue the circular economy. Second, from a lifecycle perspective, the environmental burden of products is shifting from use towards manufacturing. Third, by decreasing the use of virgin materials, a circular economy can dramatically reduce emissions and negative environmental impacts of mining and refi ning. Figure 1. 5 Things You Never Knew About the Sharing Economy. In TIME’s new cover story, Joel Stein takes readers on a wild ride through the sharing economy—renting out his car, chauffeuring people around late into the night, making dinner for strangers and even toying with the idea of doing other people’s laundry. 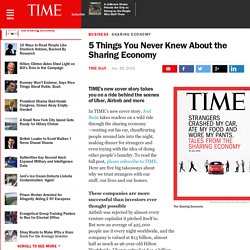 To read the full post, please subscribe to TIME. Here are five big takeaways about why we trust strangers with our stuff, our lives and our homes. These companies are more successful than investors ever thought possibleAirbnb was rejected by almost every venture capitalist it pitched itself to. But now an average of 425,000 people use it every night worldwide, and the company is valued at $13 billion, almost half as much as 96-year-old Hilton Worldwide. Uber is valued at $41.2 billion, one of the 150 biggest companies in the world–larger than Delta, FedEx or Viacom. It makes people nicerNo matter how well trained service employees might be, everyone is nicer when they’re dealing with customers directly. The Extra Mile: Customer Service and the Sharing Economy.

McNeal Maddox | December 17, 2014 | 0 Comments With the growth of the sharing economy, brands must be ready to respond to customers' grievances and issues in a timely manner, or face losing valuable market share. 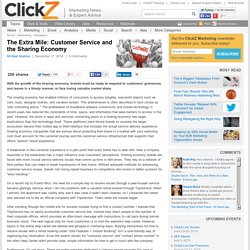 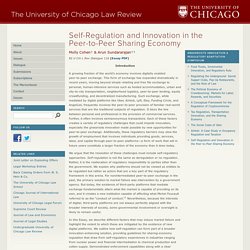 This form of exchange has expanded dramatically in recent years, moving beyond simple retailing and free file exchange to personal, human-intensive services such as hosted accommodation, urban and city-to-city transportation, neighborhood logistics, peer-to-peer lending, equity crowdfunding, and decentralized manufacturing. Such exchange, while mediated by digital platforms like Uber, Airbnb, Lyft, Etsy, Funding Circle, and AngelList, frequently involves the peer-to-peer provision of familiar real-world services that are the traditional subjects of regulation.

It blurs the line between personal and professional in the provision of commercial services. We argue that the resolution of these challenges must include self-regulatory approaches. How to Socialize Uber. The new edition of Jacobin, focusing on technology and politics, is out now. Four-issue subscriptions start at only $19.

Recently, Mike Konczal made a splash with a piece in the Nation titled “Socialize Uber.” His argument was simple: most of the capital used by Uber — the cars, the auto insurance — is paid for by the workers. Yet the workers don’t get any of the profits. (Actually, Uber probably doesn’t make any profits yet, but it collects something like $2 billion a year from drivers; it then blows most of that on marketing and lobbying.) Companies That Connect People In Real Life. How to Launch a Business in the Sharing Economy. This story first appeared in the January 2015 issue of Entrepreneur.

To receive the magazine, click here to subscribe. As a tech executive who often traveled on business, Aaron Easterly was constantly asking friends and family to care for Caramel, his beloved Pomeranian. “I would never take her to a kennel, so I’d go frantically down the list of family, friends and neighbors every time a business trip came up,” he says. “This was just one of those areas that felt frustratingly broken.” Intrigued by the growing popularity of peer-to-peer platforms like Airbnb and Uber, Easterly sensed that there was an untapped market for other dog owners who didn’t wish to utilize commercial kennels or daycare services.

In 2011 he launched Seattle-based Rover, which connects pet owners needing boarding or sitting services with a network of prescreened dog lovers for hire. Easterly is not alone. Creative Self-Disruption by Mohamed A. El-Erian. LAGUNA BEACH – Like many readers, I still vividly recall when Nokia was the dominant player in mobile phones, with over 40% of the market, and Apple was just a computer company. I remember when Amazon was known only for books, and when dirty taxis or high-priced limousines were the only alternative to public transport or my own car. And I recall when the Four Seasons, Ritz Carltons, and St. Regises of this world competed with one another – not with Airbnb. Now, I may be old, but I am not that old. These changes happened recently – and fast. An industry can be transformed by top-down economic, financial, political, and regulatory changes. Indeed, rather than using existing approaches and processes to compete, these entrants created radical new game plans, rewriting the target industry’s rules.

Mother Pelican ~ A Journal of Solidarity and Sustainability. Few debates highlight the many complex issues around how governments should share a nation’s wealth and resources as much as the current discourse on basic income. Also referred to as a citizen’s income, the policy generally refers to the unconditional and universal payment of a regular sum of money to a country’s residents, usually as a replacement for a range of existing state benefits such as pensions, child allowances, tax credits and unemployment payments.

Unlike many other policies that challenge the status quo, the scheme commands substantial support across the political spectrum – from progressives who hope it can reduce inequality and improve social justice, to neoliberals seeking to further diminish the role of the state in delivering a full range of welfare services. Questioning the political context A convincing case for an unconditional basic income has long been put forward on the basis of personal liberties and freedoms. Will Concierge Apps Mean the End of the Errand? One afternoon a few weeks ago, I realized I needed a handful of ingredients for dinner — some cilantro, another onion. There’s a grocery store around the corner from my apartment. I could have gotten there and back in less than ten minutes.

Instead, I stretched, made myself another cup of tea, and opened an app on my iPhone to let a personal shopper know what I needed. About 90 minutes later, the groceries appeared in my apartment. I never had to leave the sofa. Sharing Economy: Built on Trust, Provides Consumer Empowerment. Share. Don't own: The sharing economy takes off. He sharing economy is a hit with millennials. Need a car? No need to buy one. Hire one from Zipcar. Vacationing in Paris and need a place to bunk out for the night? No problem. Disciplining the Sharing Economy. The increasing ability of people to exchange goods, services, and labor directly, via online platforms, is transforming how modern economies operate.

Hurry up: on-demand economy is shifting to online services. Last month I was in San Francisco running from one meeting to another. I had no battery left on my phone so I couldn’t order a ride with Lift or Uber and had to grab a taxi. Everything went well, until I rushed out of the car with the taxi driver screaming at me because… I forgot to pay. Yes, you need to wait and pay when you’re using a cab, the money is not withdrawn from your bank account as easily and rapidly as it is with Uber.

I felt bad for my old life: as a customer, I consider my impatience is fueling the awesome on-demand services developed nowadays, and I’m happy about it. A Glossary of Emerging Terms in the Collaborative Economy. Photo :”Conversation” by Steve Bridger, used with Creative Commons license. Buzzwords, buzzwords, buzzwords! Collaborative Logistics: Ripe for Disruption. I am frequently asked what sectors I think will be next in terms of being disrupted by collaborative business models.

Sharing reinvented through technology. Watch Rachel's TED Talk.Collaborative Consumption. The New B2B Buyer And The Collaborative Economy. What's Mine Is Yours: The Sharing Economy. 5 reasons why the sharing economy is here to stay no matter what. What will the UK collaborative economy look like in 2025? In-the-sharing-economy-workers-find-both-freedom-and-uncertainty. This Is Why Everyone Wins In the Sharing Economy - Testlio. Six reasons why the sharing economy is built for millennials - timesofindia-economictimes.