Brick By Brick: A free guide to building awesome communities. TaskRabbit is blowing up its business model and becoming the Uber for everything. Since it opened up five years ago, TaskRabbit has often been a godsend to people with more money than time. 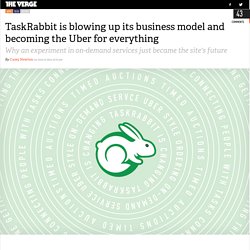 The company stocks its auction house of personal assistants with people ready to deliver cupcakes to your office, or assemble your Ikea furniture, or clean your home. But last summer, executives at TaskRabbit noticed a problem. The percentage of completed tasks posted to the service's auction house had leveled off and was beginning to decline. Individual tasks were seeing fewer bids, indicating frustration on the part of the workers who used the site.

The company was stumped: TaskRabbit added 1.25 million users to its system in 2013 and doubled its force of contractors to 25,000. In July, the company reorganized its staff, leading to the layoffs of an undisclosed number of employees. Taskrabbit COO Stacy Brown-Philpot (left) and CEO Leah Busque (right). But as the company grew, the original model came to feel less and less efficient. Platform Thinking. How would you jumpstart growth for a marketplace startup? I’m Oli Gardner, co-founder of Unbounce, The Landing Page Builder For Marketers << and Growth Hackers, and I’ve seen over 80,000 landing pages (ask me about that). 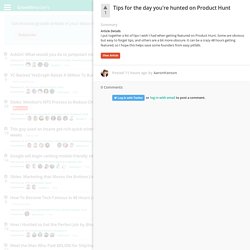 I became a marketer the day we started Unbounce (previously: creative director, interaction designer, usability lead, wildlife photographer, web developer, pizza delivery driver, C programmer, beehive factory worker). I believe that everyone should be a writer. Now I primarily speak (and write) around our lovely little world about Conversion Centered Design << the goal of which is to create conversion experiences that delight and don’t suck. I live by three letters. G.A.S. You really can Ask Me Anything. You should definitely follow me @oligardner and get your butt to Call To Action Conference. How do clients and taskers feel about TaskRabbit's pivot in July 2014 to hourly tasks/removing the bidding model? Through The Fire: What TaskRabbit Learned From Its Big Backlash.

“Right after we launched the new TaskRabbit, not everyone was happy.” 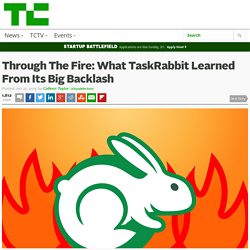 After years of being a CEO, Leah Busque knows to choose her words carefully. But speaking with her in person at a conference room in TaskRabbit’s San Francisco headquarters, it’s apparent in her voice and demeanor that she knows she’s making an understatement. It’s hard to imagine that there was anything happy about the backlash that occurred after TaskRabbit rolled out a dramatically different version of its platform on July 10, 2014.

Sitting across the table, Jamie Viggiano, TaskRabbit’s vice president of marketing who has been in the business for nearly 15 years, is more blunt. “The hardest part was the first four to six weeks after the launch,” she said. “We were like, man, this is brutal. Making the change What made it even harder is that no one quite saw it coming. Hunting Task Wabbits — Matter. I’m pretty handy with tools and home improvements, but man, if this goddamn drawer in my kitchen hasn’t given me enough fits. 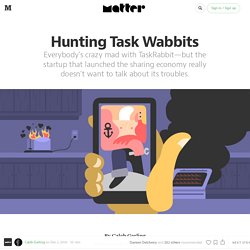 In the end, I break, enlisting someone to help me out. A few clicks and a day later, he’s there at my door: a stocky handyman with a beard, sporting a Yale baseball cap, a masters in architecture, and a law degree. His name’s Adam, “Tasker Adam W” to be more specific, and he politely asks me whether he should take off his boots. Tasker Adam W fiddles with the sliders on my drawer of doom, unscrewing and re-screwing the left-hand one. He points out that I could probably save a lot of the ker-chunk when the drawer opens if I just cleaned the rollers a little. He does this a lot. Doing a couple jobs each day, Adam estimates he’ll pull in close to $3,000 this month, which has provided financial cushion to be pickier as he looks for full-time architecture work. Tasker Adam W is doing okay. But the dream turned out to be tougher in reality.