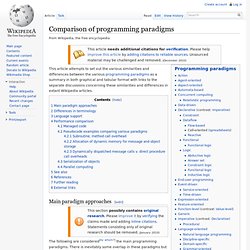 Main paradigm approaches[edit] The following are considered[by whom?] The main programming paradigms. There is inevitably some overlap in these paradigms but the main features or identifiable differences are summarized in the following table: Differences in terminology[edit] Language support[edit] Some programmers feel that these features are unimportant or even frivolous. An extension of this is the syntactic saccharin, or gratuitous syntax that does not make programming easier.[3] Performance comparison[edit] Purely in terms of total instruction path length, a program coded in an imperative style, without using any subroutines at all, would have the lowest count. 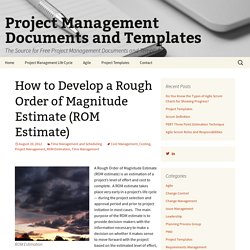 A ROM estimate takes place very early in a project’s life cycle — during the project selection and approval period and prior to project initiation in most cases. The main purpose of the ROM estimate is to provide decision-makers with the information necessary to make a decision on whether it makes sense to move forward with the project based on the estimated level of effort, in terms of completion time and cost.

Cassandra vs MongoDB vs CouchDB vs Redis vs Riak vs HBase vs Couchbase vs Hypertable vs ElasticSearch vs Accumulo vs VoltDB vs Scalaris comparison. (Yes it's a long title, since people kept asking me to write about this and that too :) I do when it has a point.) 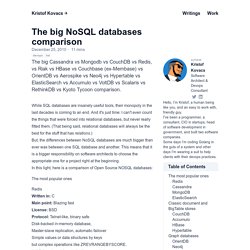 While SQL databases are insanely useful tools, their monopoly in the last decades is coming to an end. And it's just time: I can't even count the things that were forced into relational databases, but never really fitted them. (That being said, relational databases will always be the best for the stuff that has relations.) But, the differences between NoSQL databases are much bigger than ever was between one SQL database and another. This means that it is a bigger responsibility on software architects to choose the appropriate one for a project right at the beginning. In this light, here is a comparison of Open Source NOSQL databases Cassandra, Mongodb, CouchDB, Redis, Riak, RethinkDB, Couchbase (ex-Membase), Hypertable, ElasticSearch, Accumulo, VoltDB, Kyoto Tycoon, Scalaris, OrientDB, Aerospike, Neo4j and HBase: The most popular ones Redis (V3.2) Cassandra (2.0) MongoDB (3.2) - How I Explained REST to My Wife.

REST vs. SOAP – The Right WebService. Web Services are the key point of Integration for different applications belonging to different Platforms, Languages, systems. 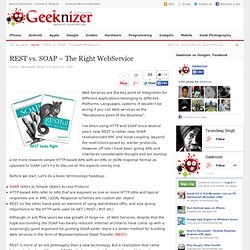 It wouldn’t be wrong if you call Web-services as the “Rendezvous point of the Business”. I’ve been using HTTP and SOAP since several years new. REST is rather new. SOAP revolutionized RPC and loose coupling beyond the restrictions posed by earlier protocols. - How I Explained REST to My Wife.

Enterprise Integration Patterns - Table of Contents. Role-profile-for-software-architects-v1.pdf (application/pdf Object) EES. BreakIterator (ICU4J 49) Vba - Way to run Excel macros from command line or batch file. IBM HttpServer and websphere Appserver (Websphere forum at JavaRanch) Let’s look at a typical web based interaction with our application server at runtime. Let’s use a typical scenario where the request is coming in from an Internet browser, such as Internet Explorer, Netscape Navigator or Opera. We’ll also simplify the interaction by eliminating the complications presented by workload enhancements such as the Edge Server components, network sprayers and caching proxies. This is sometimes referred to as algorithmic programming. Although most languages were designed to support a specific programming paradigm, many general languages are flexible enough to support multiple paradigms. Many XSLT developers are familiar with the pure functional approach.

GOTO Aarhus 2010 Conference. JAOO is now GOTO new name, same conference Thanks to all of you who participated in making GOTO 2010 a fantastic conference. Photos and presentation slides are available online and we invite you to share your thoughts with us on twitter, #gotocon. See you at: JAOO has grown and we need a name that conveys the breadth of topics and the 360° perspective that runs throughout our conference program today. JAOO began as a software conference focused primarily on Java and Object Orientated Languages and now after 14 years, the conference has evolved to cover new topics such as .Net, Open Source, Agile, Architecture and Design, Web, Cloud, New Languages and Processes. Our new name GOTO captures our concept of including the latest developments as they become relevant and interesting for the software development community .

Related:  Ideas   -  WEB TECHNOLOGIES   -  Cassandra vs MongoDB vs CouchDB vs Redis vs Riak vs HBase vs Couchbase vs Hypertable vs ElasticSearch vs Accumulo vs VoltDB vs Scalaris comparison   -  Ohloh, the open source network   -  Education   -  Enterprise