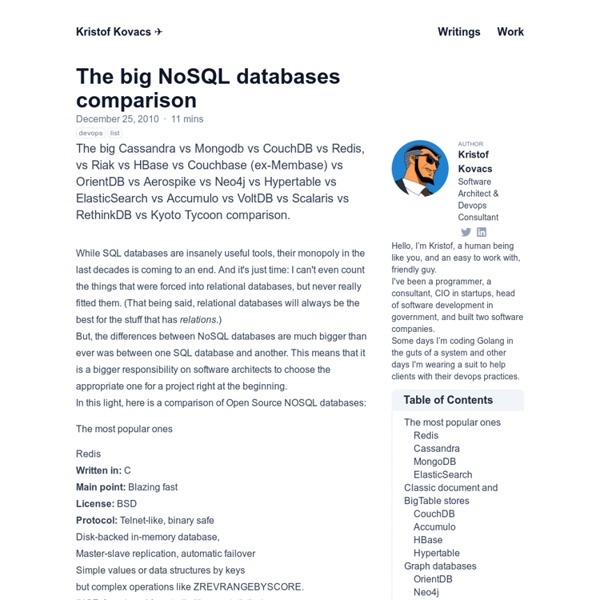 (Yes it's a long title, since people kept asking me to write about this and that too :) I do when it has a point.) While SQL databases are insanely useful tools, their monopoly in the last decades is coming to an end. And it's just time: I can't even count the things that were forced into relational databases, but never really fitted them. (That being said, relational databases will always be the best for the stuff that has relations.) But, the differences between NoSQL databases are much bigger than ever was between one SQL database and another. This means that it is a bigger responsibility on software architects to choose the appropriate one for a project right at the beginning. In this light, here is a comparison of Open Source NOSQL databases Cassandra, Mongodb, CouchDB, Redis, Riak, RethinkDB, Couchbase (ex-Membase), Hypertable, ElasticSearch, Accumulo, VoltDB, Kyoto Tycoon, Scalaris, OrientDB, Aerospike, Neo4j and HBase: The most popular ones Redis (V3.2) Cassandra (2.0) MongoDB (3.2)

A Comparison Of NoSQL Database Management Systems And Models A previous version of this article was written by O.S. Tezer. Introduction When most people think of a database, they often envision the traditional relational database model that involves tables made up of rows and columns. While relational database management systems still handle the lion’s share of data on the internet, alternative data models have become more common in recent years as developers have sought workarounds to the relational model’s limitations. These non-relational database models, each with their own unique advantages, disadvantages, and use cases, have come to be categorized as NoSQL databases.

Couchbase: Server Features Flexible Data Model JSON Support Couchbase Server 2.0 has native support for JSON documents. Each JSON document can have a different structure, and multiple documents with different structures can be stored in the same Couchbase bucket. Document structure can be changed at any time, without changing other documents in the database, making it faster to add features to your application. Indexing and Querying Add search features to your application, try Elasticsearch part 3 : attaching indexation to events « Diving deep into JEE Now that we are able to index, we should think of when whe should trigger indexing tasks. A simple answer would be : whenever some indexed data has changed. “Changed” means change cardinality (add/remove) or change existing data.

FAQ Why Redis is different compared to other key-value stores? There are two main reasons. Redis is a different evolution path in the key-value DBs where values can contain more complex data types, with atomic operations defined against those data types. Redis data types are closely related to fundamental data structures and are exposed to the programmer as such, without additional abstraction layers. Yet another MongoDB Map Reduce tutorial Background As the title says, this is yet-another-tutorial on Map Reduce using MongoDB. But two things that are different here: A problem solving approach is used, so we’ll take a problem, solve it in SQL first and then discuss Map Reduce. Lots of diagrams, so you’ll hopefully better understand how Map Reduce works. The Problem

Thoughts on development using CouchDB with Node.js I was recently on a client facing project for Bocoup and needed to store millions of tweets that contained sentiment analysis of the text. From this sentiment gathered along with other various metadata, I was tasked with creating a scalable API that could query/filter the data retrieved. This post will discuss the Why and the How behind my first experience with CouchDB and how I created a better development environment in order to deliver a polished product. Why CouchDB? First and foremost, I have a "background" with MySQL, SQLite and SQL Server from previous employment and college. Nothing with NoSQL solutions.